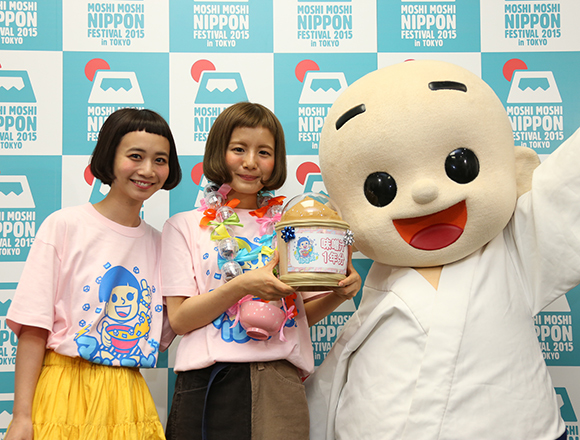 In Japan, there’s an ambassador for everything. Mito Natsume is the ambassador for Kawaii miso soup (where she runs under her alias Miso Natsume). She attended the release party for Marukome’s newest “Kawaii Misoshiru Harajuku flavor” on January 7, welcoming the first Marukome-chan, Asahi Shimoda. The new miso soup that apparently tastes like Harajuku uses 24 different types of barley miso, uses no artificial ingredients, and realizes its flavor with bonito stock, Japanese-style soup broth, and kelp stock.
Toppings include two types of Mito Natsume-selected KAWAII kamaboko (fish cake); one with a drawing of the mascot character, Marukome-chan, the other is the heart-shaped pink flower; as well as little pieces of fried egg. Thought this mascot character was adorable? You can also purchase your own Marukome-chan magnet at the end of February at conbinis nationwide! (*May not be available in some stores)
Mito Natsume also performed her Nakata Yasutaka-produced song, “MOSHIMO cooking,” at the event. The “Kawaii Misoshiru-yasan” opens today at Harajuku’s tourist information center, MOSHI MOSHI BOX. Running under the theme MISO KAWAII, this store delivers the Meiji Jingu flavor with mochi and Ball-Shaped Dried Wheat Gluten as well as the Moshi Moshi flavor with seaweed, nameko, and green onions.
Aside from these two original flavors, there will be 6 other varieties of miso soup. Each cup will be for 100 yen and it will be free for all foreigners to give it a go.
Wondering what Mito’s “MOSHIMO cooking” sounds like? All you got to do is drop by the MOSHI MOSHI BOX to have a listen! Drop by and warm yourself up with a cup of miso soup!