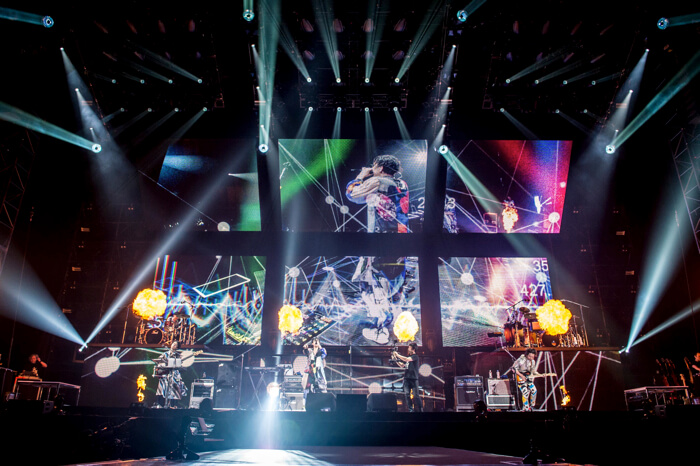 RADWIMPS embarked on their solo tour Road to Catharsist Tour 2018 on June 1 which saw the Japanese rock band hit 11 venues around Japan to promote their release of Catharsis. It concluded on June 27 at the World Memorial Hall in Kobe. Many fans dressed up in the blue tour t-shirts which, together with their excitement, was akin to a scene at the World Cup. This is a report of their concert at Yokohama Arena on June 20. 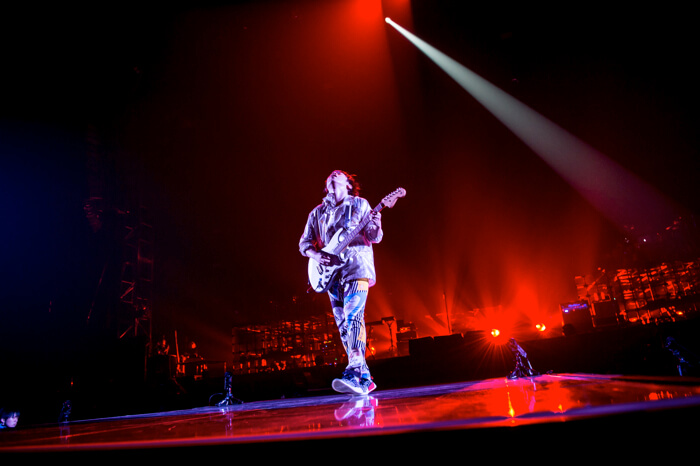 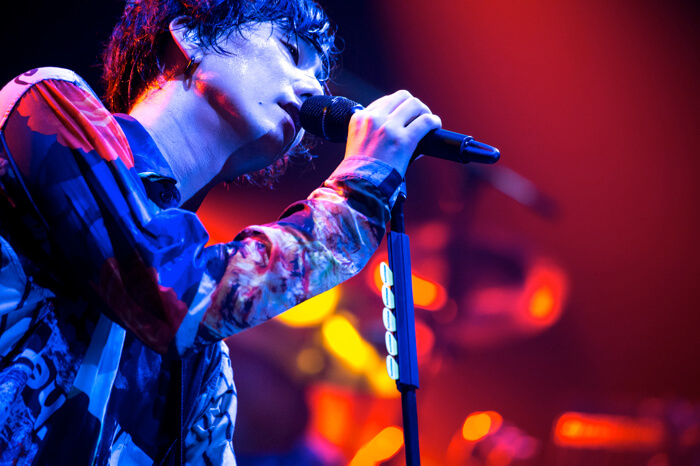 It began with flashing red lights and the roaring sound of a siren, which summoned the band on stage to start the show, the first song being AADAAKOODAA. Yojiro Noda, the lead vocalist, guitarist and songwriter of the band took no time at all in engaging in call and response with the crowd before moving onto the good-feel track One man live. Lead guitarist Akira Kuwahara and bassist Yusuke Takeda too were pumped as they ran around the stage playing their instruments.

Noda took a moment to greet everyone, expressing their mutual excitement with the crowd from the get go. “We’re back, Yokohama! The festive feeling in here is impressive, isn’t it.” 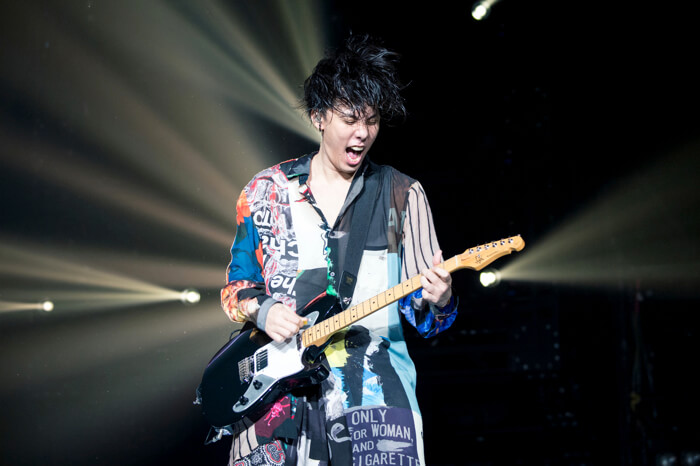 The band then went on to perform several songs from their early days, including Oreiro Sky and Yayu.

“We have a lot of old songs. If anybody out there is left behind, be sure to put your arm around their shoulder,” said Noda. Up until now, the set-list was comprised of upbeat and foot-stomping numbers, but it was time for a ballad: Sparkle. It began with a piano solo and towards the second half lifted off, revealing the dramatic soundscape of the track. 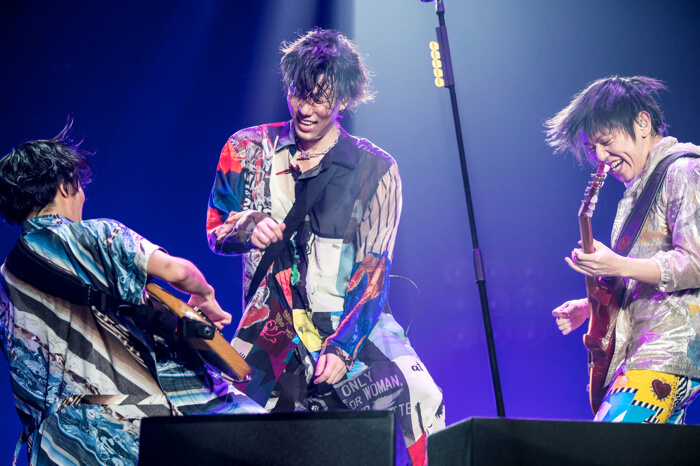 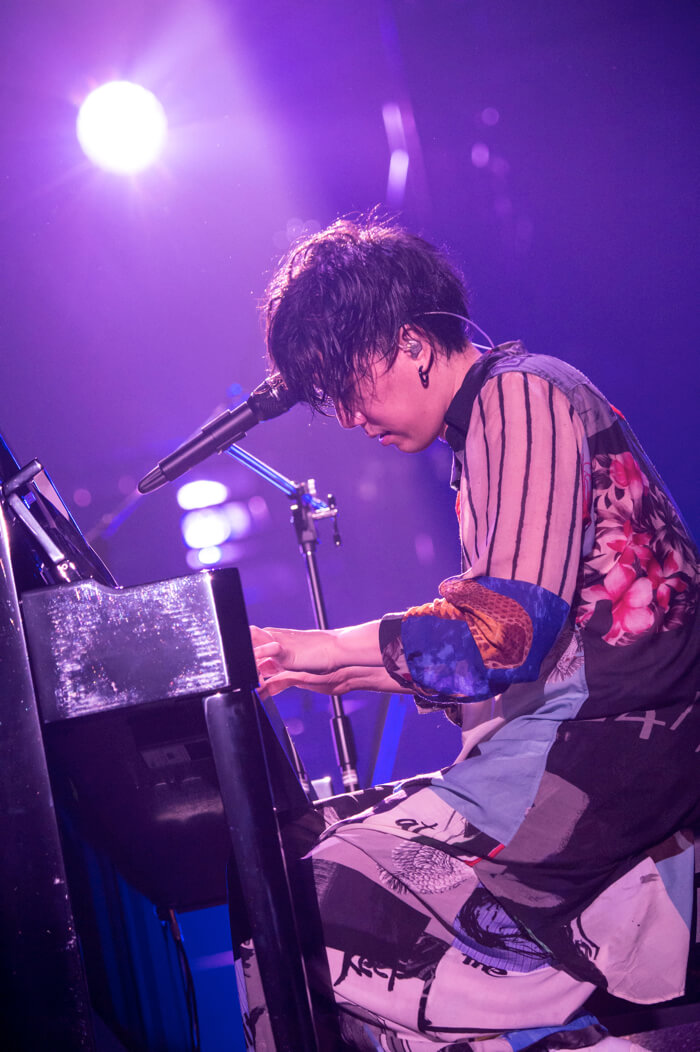 During the performance of Oshakashama, Kuwahara and Takeda, together with support drummers Toshiki Hata and Miki Mori, exchanged thrilling solos when Noda pointed to them. Catharsist heated up the room, and a photo of Noda was projected on screen which evoked screams throughout the room. The crowd clapped in time for the chorus. Towards the end of the song when the lyrics “negau dake” were sung, the three members came together in the middle of the stage and lively played together.

Just when everyone thought Kuwahara had fired up the room with his chaotic guitar skills during the outro of the next song Senno, Noda suddenly appeared on a sub-stage to sing Weekly Shonen Jump calmly and gracefully to the sound of a piano, leading the crowd to offer a warm round of applause. 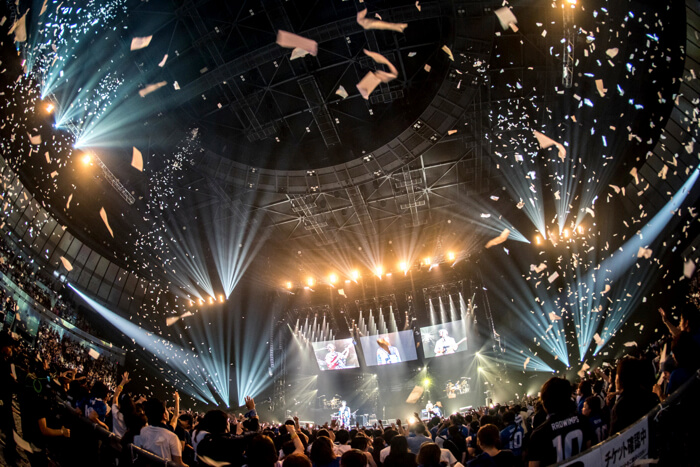 Noda, who left on the sub-stage, said “We won the soccer game, didn’t we?” He touched on the World Cup game with Japan recently and went on to explain his thoughts on the band’s new song Hinomaru. “I’ll always be able to deliver right from within myself. So is it alright if I sing for you today too?” Upon saying this, he sang Hinomaru while looking across the room. Confetti rained down towards the end of the song as he wrapped the crowd in the sound of his beautiful voice. They then went on to perform the upbeat tracks Tremolo and Iindesuka? before finishing with Kimi to Hitsuji to Ao.

“You helped sing along to the old songs too and made me remember the me I had forgotten,” said Noda, expressing his heartfelt thanks. He continued, “This is our song that says no matter what happens, you have to keep on living life each day” which led into an emotional performance of Bouningen. The singer then announced the band’s future plans: “We’re making an album. It’s looking to be awesome,” before wrapping up with DADA and welcoming the night’s utmost catharsis. 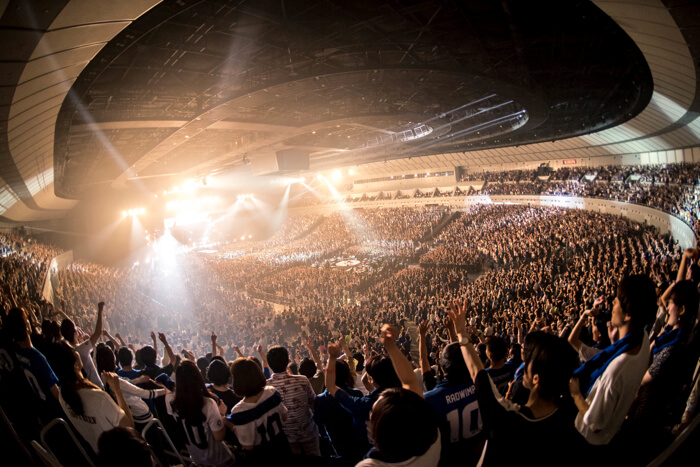 RADWIMPS will embark on their first Asia tour in almost a year from July. A total of eight performances to an estimated 40,000 fans, it will mark the biggest overseas tour in the band’s history.