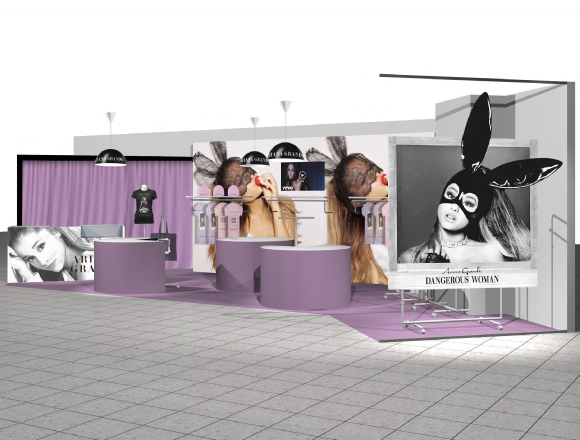 Look out for “SHIBUYA 109 loves Ariana Grande” ー the new collaboration between Ariana Grande and Shibuya 109 to celebrate the release of her new album “Dangerous Woman” which goes on sale from 20th May!

From Thursday 19th May 〜 Sunday 19th June, Japan’s first Ariane Grande official shop will be open! As the first part of this epic collaboration, Ariana Grande’s new shop will be selling her new album “Dangerous Woman” amongst other previous albums, T-shirts, bags and more from Ariana’s official merchandise range!

As fans excitedly await Ariana’s arrival in Japan in June, the news of her collaboration is spreading! Inside the shop, there is a commemoration photo area where fans can take pictures to join in the celebration! The pictures that are taken can be uploaded to social networking sites as part of Ariana Grande’s mosaic art! Get ready for a shopping experience you will never get tired of!!

SHIBUYA 109 will hold their commemoration event at the storefront’s event space on Friday 20th May, when the album is released for sale. On this day, there will be plenty for fans to keep on the look out for, such as the original Instagram frame which will be located inside the store. Ariana Grande will also be showcased on a screen for fans to watch and enjoy. In addition to this, a limited number of original fans will be distributed in the store, so there is plenty to enjoy!

■Product information
Ariana Grande 『Dangerous Woman』
Released for sale on Friday 20th May 2016 at the same time around the world.