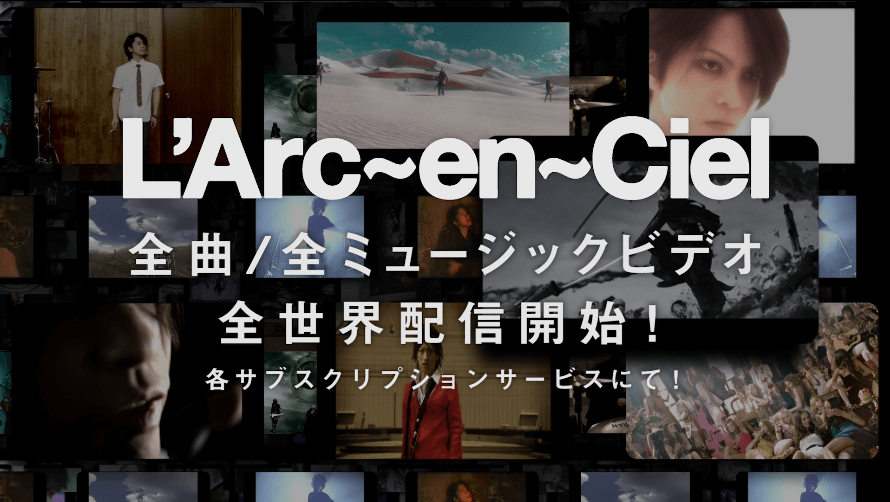 Today, L’Arc~en~Ciel’s entire discography and all their music videos were released worldwide on subscription and streaming services.

This includes everything from their 1993 record DUNE up to their 2018 live album 25th L’Anniversary LIVE, totalling 436 songs. Additionally, all 51 of their music videos since forming as a band have also been released. Find them on all the major digital music services including Spotify, Apple Music, Amazon Music, YouTube Music, LINE MUSIC, and AWA.

A curation of ten of their music videos entitled “[L’Arc~en~Ciel Selected 10]”were also released on YouTube including Niji, HONEY, Kasou, Shinshoku -lose control-, Driver’s High, STAY AWAY, New World, DRINK IT DOWN, X X X, and Don’t be Afraid.

But it doesn’t stop there for fans, as the band are set to release seven live videos across the next seven days on YouTube starting with a performance of HONEY taken from the 15th L’Anniversary Live which will premiere in 4 hours. This is a real treat for fans of the band across the world who can tune in simultaneously to watch the performances. They won’t know until the day which songs will be released, which is all part of the fun.

The band will release their Christmas live concert “LIVE 2018 L’ArChristmas” held at Tokyo Dome last year on December 18. They are set to embark on their first nationwide tour of Japan from January 9, 2020 entitled “L’Arc~en~Ciel ARENA TOUR MMXX.”

Listen to them Streaming: https://kmu.lnk.to/LArcenCiel_st

・One live performance to be released every day until December 17, 2019