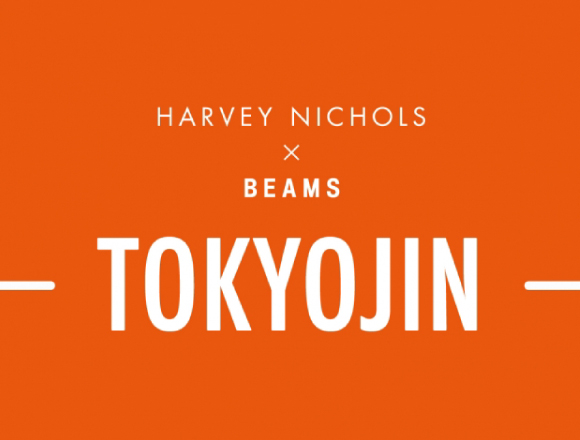 BEAMS Co., Ltd. have opened a pop-up store called “TOKYOJIN” in London’s representative department store Harvey Nichols in Knightsbridge. The store opened on September 1st and will be open until October 15th. Tokyo is a truly diverse city home to people from all over the world all with different cultural backgrounds. It’s an environment that can be both dead silent and tumultuous. It’s a place where the traditional and the innovators co-exist. The people who live in this city, one that is always advancing in complexity and originality; who still cherish traditional Japan while also looking out to the world to expand their interests, are called “Tokyo Jin” (“Tokyo People”). The “TOKYOJIN” pop-up store has been set up in Harvey Nichols by BEAMS, who cater to the needs and lifestyle of the modern man, to present Japanese fashion, sundries and more. In addition to original items from BEAMS, a brand very familiar to the Japanese people, the shop stocks a wide of items, including wares from Japanese fashion brands such as “Loopwheeler,” a high quality cut-and-sew brand that makes its clothing with old-style loopwheel knitting machines; “Buzz Rickson’s,” whose painstaking work into their bomber jackets is recognised all around the world; “Teatora,” a brand which wields very modern design concepts; “Arc’teryx,” who creates made-to-order items with BEAMS; and more, all of which lead the Tokyo fashion world. The shop is also selling a variety of traditional Japanese craftwork goods including original BEAMS sensu folding fans, pottery works from “Hamada-Pottery,” kokeshi dolls made by “Sendaikiji Seisakujo” and more. But it doesn’t stop there, as there’s photo collections from Japanese photographers including Moriyama Daido and Takashi Homma available for purchase to showcase the techniques and sensitivity of Japanese people. And to celebrate the opening of the pop-up store, there’s limited edition items for sale too including a Champion×Harvey Nichols×BEAMS triple collaboration. Publisher HATO PRESS are holding a range of workshops while the shop is open and there will also be numerous events for people to experience Japanese culture. Workshops include bonsai, Risograph, calligraphy and more. There’s a special page on the official Harvey Nichols website introducing “TOKYOJIN” and what it’s all about. It includes a movie produced with “poweredby.tokyo,” a project introducing the Tokyo Jin lifestyle to the rest of the world in their own original way. There’s also an interview with BEAMS representative Yō Shitara, along with a range of other things to see.

Don’t miss out on your chance to experience the real Tokyo at the TOKYOJIN pop-up store.