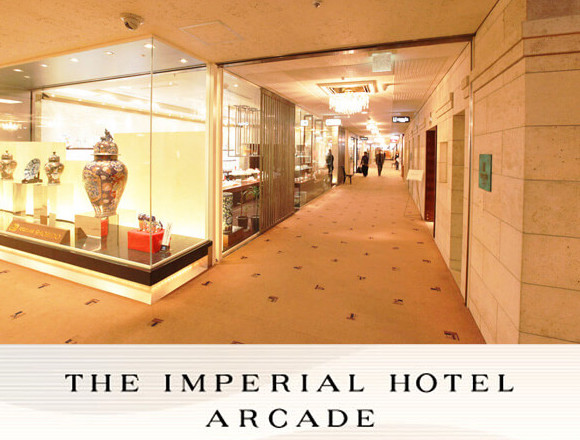 THE IMPERIAL HOTEL ARCADE is the “first arcade in Japan.” The reason they built an arcade was because they did not want their shopping customers from foreign countries to get wet during rainy weather. In this traditional arcade, an exhibition exhibiting dessert art works “Sweets Art Ten 2017” (8th time) will be held.

THE IMPERIAL HOTEL ARCADE is a sonorous shopping arcade where many royal personages, important persons in the political and financial worlds and Hollywood stars have visited. Famous people such as Marylin Monroe and Babe Ruth visited this arcade in the past. Currently, there are more than 50 sophisticated stores in this arcade. This is a competition in which many dessert artists in Japan participate. Thirty-one beautiful and unique works in total will be enrolled and the top three works will be selected by the staff of the arcade and through a plebiscite (selection period – the 1st of December (Fri.) to the 8th (Fri.)). The works being considered for a prize will be announced at the venue and on the website on December 13th (Wed.).

*Voting ballots will be handed out to all persons who have bought more than 1000 yen’s worth at related stores.

The main object of the event will be a miniature town made of 10,000 sugar blocks. It is a work which reproduces persons and things related to Christmas centering around a white castle which is the symbol of the town, a snow man and a Santa Clause.

A Dotted Santa Clause made of block sugars. Let’s take photogenic photos together with this artistic and cute Santa Clause.

This is a campaign where you can obtain a participating ticket for a “treats-grabbing event” by uploading photos taken with one of the following things onto your SNS. – “Sugar Cube no Dot Art Santa,” “works enrolled in the competition” and “Sugar Cube no Christmas Town.”

※The “Treats grabbing event” will be held at the venue of the lottery event. One time per person. The event will end after all the prizes have been handed out. Let’s enjoy these desserts that are made in a precise manner.