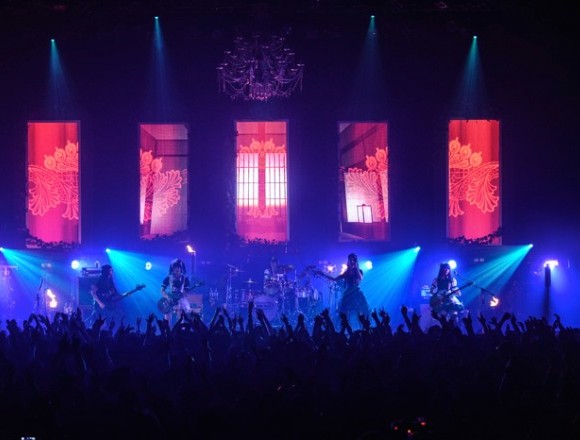 International rock sensations BAND-MAID just completed the final date of their Moeru no? Moenai no? Docchi na no!? tour which saw the girls serve 10 shows around Japan. The tour finale was held at Shinkiba STUDIO COAST in Tokyo on November 24th which sold out and was adorned by a staggering 25 song set-list.

With their difficult-to-obtain tickets in hand, the masters and princesses lined the crowd, waiting in silence and absolute anticipation for BAND-MAID’s entrance. The stage was decorated gorgeously with a giant chandelier overhead and 5 LED monitors that looked like Western style windows. In that moment, the members stepped onto stage gallantly with no speech or introduction and opened their tour finale immediately with their latest single “Choose me” to the roars of screaming fans.

It began with Saiki’s vocals: this brand new lead track symbolic of the band raised the voltage of fans in the room as the band gave an electrifying performance and full-on opening course. The madness continued as they went onto “Don’t you tell ME.” The energetic performance encapsulated the masters and princesses with their heavy sound, transforming Shinkiba STUDIO COAST into a hard rock haven.

A bellowing base drum signaled the start of “Moratorium” and ensued Saiki instructing everyone to jump, synchronizing both the band members and masters and princesses in a heated musical moment.

In the following section, guitarist and vocalist Miku Kobato and Saiki left the stage to give space for AKANE’s drum solo. Bassist Misa and guitarist Kanami joined in the instrumental session, stirring the rock hearts of fans with a first-of-a-kind display of their rock skills.

Miku then greeted fans, saying “Welcome home, my masters and princesses. Welcome to BAND-MAID’s serving.” This was followed by Saiki’s frenzied beckon as she asked “I can’t hear you. Put your hands up!” Fans responded accordingly in a display of their fighting spirit which led into the next part of this intense night. The sound of a piano indicated the start of “Awkward,” a track loved by masters and princesses overseas, before the band went on to perform “Daydreaming” with Saiki’s stand-out vocals. The crowd was dazzled with captivating lights and lasers which turned the performance into a truly entrancing experience.

When the intro to “YOLO” began to trickle, the masters and princesses stood there completely still in adoration of Saiki’s singing voice before the room turned into a rock haven once more. Kanami’s guitar solos were truly fantastic in “YOLO” and “alone” as each fan was swallowed by BAND-MAID’s world. The set was a non-stop advance to an endless string of songs, and then it happened. Miku’s ritual good luck call-and-response made its appearance, shifting the rock atmosphere on its side for maid cafe inspired chants “moe moe” and “kyun kyun” which echoed through the room.

When the good luck charm session came to a close, the rock returned for another wrecking as the band played their new song “One and only” which is used as the theme song for the movie “Kuruibana.” This was followed by their defining track “REAL EXISTENCE” and then “Play” which had all the rock kids dancing at rock festivals up and down Japan this year.

“Play” was graced by Misa’s slap bass and Kanami & Akane’s guitar solos. Pillars of fire blazed the room all the way to the roof, turning it red, fortifying the rock atmosphere ever more. The lyrics were projected on the LED monitors at the back of the stage during “secret My lips,” bringing together everybody in the room and showing everyone their growth into a defining rock band. “Give us everything you’ve got!” Those words preceded the final track “the non-fiction days” during which the crowd definitely met the members’ expectations, exploding as the night drew to a close. The flame pillars were used once more as in the music video for “the non-fiction days” before settling and concluding the end of what was BAND-MAID’s biggest solo show to date. BAND-MAID’s solo tour was taken to 17 different locations around Japan and overseas where BAND-MAID were able to sharpen their sound as a band and show the fans at the finale just what they are now capable of.

BAND-MAID continue to spread their wings across the world. Don’t miss out on BAND-MAID’s additional show at Zepp DiverCity in Tokyo on December 9th.