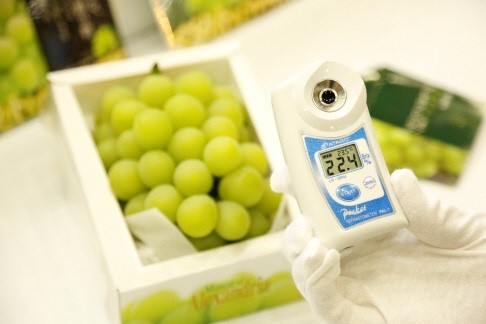 The first wholesale produce market of the year for Muscat of Alexandria, a white wine grape and special local product of Okayama Prefecture, was held at Ota Wholesale Market in central Tokyo on the morning of May 28. 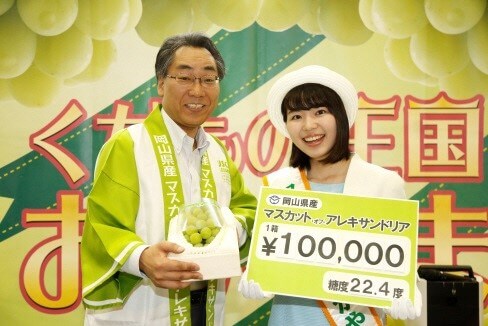 Before the market opened at 7am, a PR ceremony was held which was attended by the vice-governor of Okayama Prefecture. “I wish to humbly taste Okayama Prefecture’s proud Muscat.” After the vice governor’s greeting, the 100-or-so people associated with the market each treated themselves to a grape one by one.

The first quotation of the stock is a staggering ¥100,000 for one bunch of the grapes, which was the highest value for a bunch last year. It was said that this year’s winter was harsh, and it was difficult to control the temperature in-house making it a lot of work, but the time and labour has paid off. The sugar content of a portion of the grapes has increased to 22.4 from 16 which is the delivery basis.

Muscat of Alexandria are called the ‘queen of fruits’ in Japan for their rich flavour and exquisite sweetness. They have become synonymous with ‘high quality grapes.’ They originate from Egypt which has a hot, dry climate. It’s said that Cleopatra loved the grapes too. Japan has low precipitation, and Okayama Prefecture is known as ‘the sunny country,’ and so this is where the grapes have come to be cultivated. It has been 132 years since they began growing Muscat of Alexandria, which comprises over 90% of the market share for grapes in Japan. 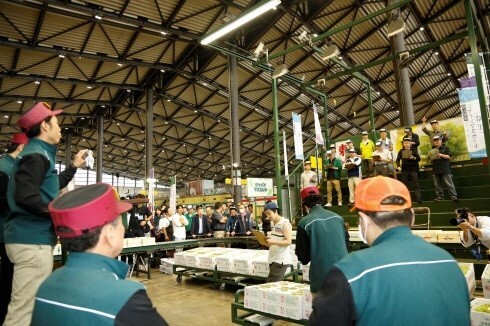 The Muscat of Alexandria grapes, which dropped in price on the morning of the 28th, receive an early sale in the afternoon in the city. Additionally, the ‘Okayama Muscat Fair’ is set to take place on June 2 and 3 at Ginza Sembikiya and June 9 and 10 at the Sembikiya flagship store in Nihonbashi.

Okayama’s Muscat of Alexandria can be enjoyed from May 28 to the end of October. Their taste is like no other, so why not treat yourself or buy some as a gift for that special someone?