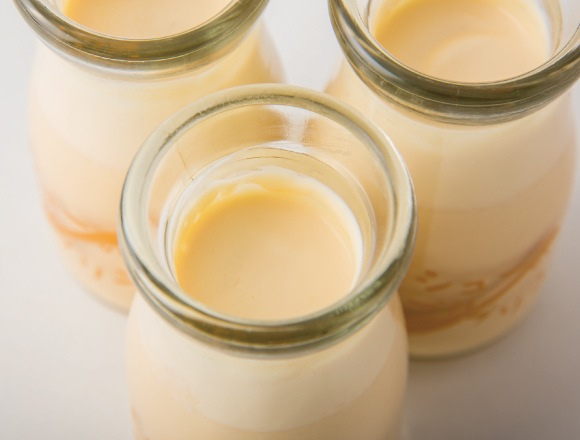 Firm texture pudding used to be the stereotype of Japanese pudding, but the more creamy type pudding has been getting popular since 2000.  The sweets store in Nishi-Kamakura called “les schoux” is said to be the one which sparked the creamy type pudding boom in Japan. One of the popular menus in this store is “Maple pudding.” I interviewed the owner chef, Masami Kurauchi, who created the recipe for this “Maple pudding” about the secret of this taste and the story how he came up with this recipe. The light sweetness and rich flavor of pudding made from particular kind’s eggs and maple syrup. They sell more than three hundred puddings every day. They are particular about their ingredients. Put the eggs of hens that raised and fed Chinese herbal medicines called “Nasuno Goyou Ran” into the fresh milk. This kind of egg is very notorious, rich in vitamins and minerals, and five to ten percent less cholesterol than regular eggs.

One more characteristics of this “Maple pudding” is this natural sweetness. The ordinal pudding has strong sweetness, and you usually eat it with light bitter caramel sauce.  “Maple pudding” doesn’t contain caramel sauce, and remain richer egg and milk flavor by putting a little bit sweet maple syrup onto the entire pudding.

The maple syrup they are using is the valuable maple that they can tap only one litter out of forty litters of maple tree sap in Quebec, Canada. They use both the maple sugar and the syrup from this maple. Mr. Kurauchi said “Maple sugar and maple syrup has different amounts of moisture.  I can make the natural sweetness by balancing these two maples. ” Great sweets that is made by French chef

Mr. Kurauchi was born and raised in Kamakura, and trained in the French restaurants. When he visited the restaurants in France, he was enchanted with their high quality deserts. After that, he opened the “les schoux” in Nishi-kamakura.  Mr. Kurauchi, who trained as a French chef not a pastry chef said, “The experiences and ideas as a French chef are fully utilized for creating taste and design for cakes.”

The creamy type pudding “Nishi-kama pudding” that made les schoux famous was made from the idea to enjoy the taste and texture of the pudding to the last bite. He came up with this recipe from the image of the soup that spread the taste into the mouth once you eat it and the soft boiled egg. It sounds more like a French chef’s idea.

These puddings become popular after doing many media interviews. However, this product was unsuitable for delivering to people’s homes since it is too soft to hold its shape.

That’s why he created the “Maple pudding” that is easy to send to home. The surprising thing is, it perfectly holds its shape when you received this product at home, but taste so melty and creamy.

“I tried to make it with as minimal hardness as possible, and stopped putting the sauce in it and made the pudding taste richer so not to get mixed with the syrup. I really worked hard for making it have a light texture and milky taste by utilizing the maple’s taste and flavor.  It took two and half years to finish creating the ideal one.”

Les schoux tries to serve the great hospitality and products which are suited for each customer.  “Maple pudding” represents the idea that they want people who are not easy to stop by the store to enjoy their products. People from all over Japan visits this store even though there is no big advertisement.

Interview & Statement / hoshino (Born from Gifu, after spending eight years in Tokyo, I moved to Fukuoka. I love sweets and eels. The recommended spot is Yoro Tenmei Hantenchi.）

■Related article：“Echizen Oroshi Soba” is the best soba noodle that is being particular about how to grind buckwheat flour and dried bonito shavings which are used as seasonings.