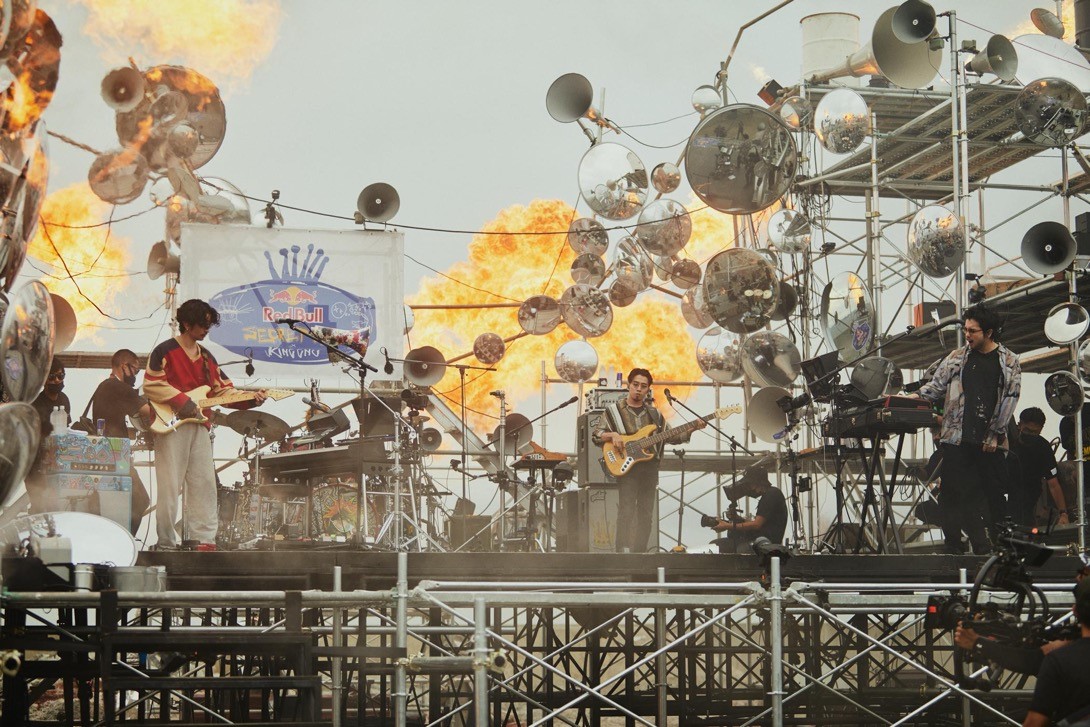 As part of Red Bull and King Gnu’s “Go Louder” project, the Japanese pop-rock band held an exclusive live concert at a secret location as part of the Red Bull Secret Gig experience on July 4. That location was Tokyo Bay’s No.2 Sea Fort which invited fans attended on July 4. 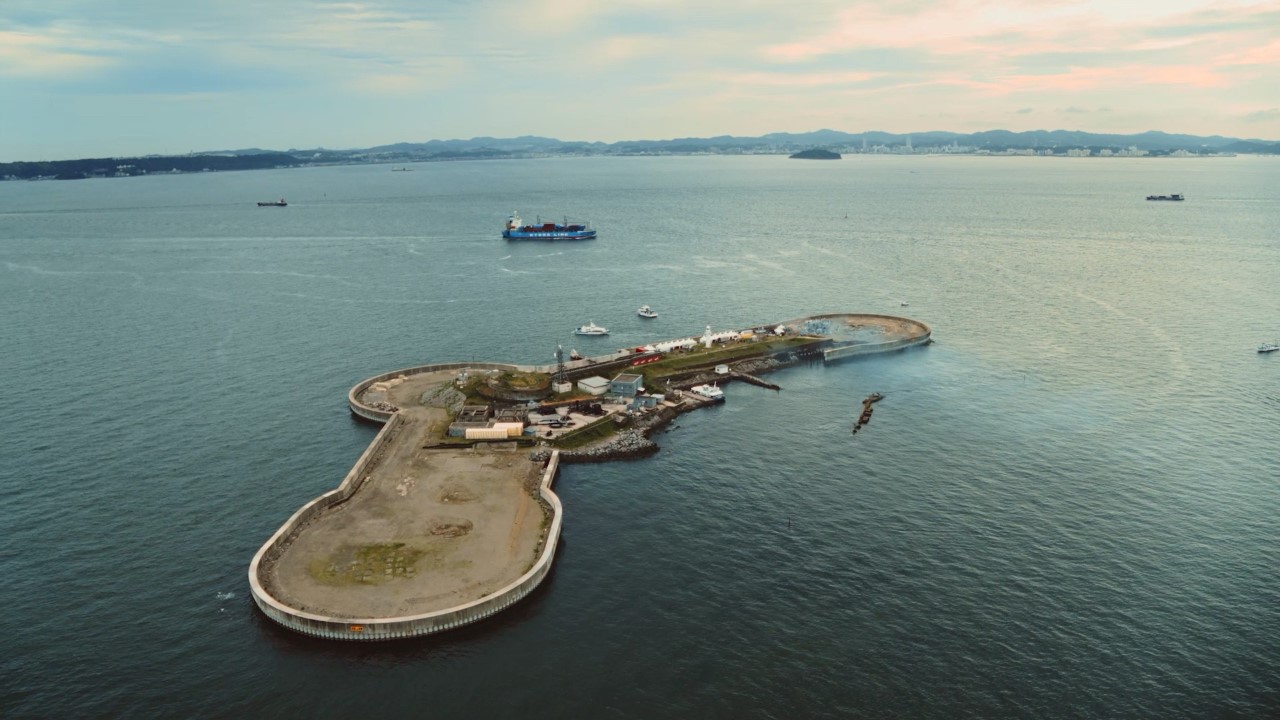 No.2 Sea Fort has a history as formally being a gun battery that’s part of Tokyo Bay Fortress. The site has a lot of large machinery and is normally under strict management, making this the first time a live music concert has been held there. Over 130,000 fans applied to attend the show, and just 70,000 lucky ones were selected to both attend in-person and watch via an official livestream.

To find the venue, fans has to solve a puzzle. 30 illustrations of megaphones were plastered up all around Japan, each facing a different direction. Photos of them were also posted on Red Bull Japan and King Gnu’s official Twitter accounts. The clue fans were given was that all the megaphones were geographically facing the direction in which the venue was located, so everyone had to put their heads together. For those unable to attend or watch the show, part of it along with a behind-the-scenes will be released on Red Bull TV on July 22.

An unforgettable, once-in-a-lifetime experience. King Gnu and Red Bull’s secret show was truly something special, treating fans to not only throwbacks, but exclusive sights that will never be beheld again. The main reason behind that was because the concert was held on an unmanned island in the middle of the ocean. Setting foot on this island is strictly forbidden under normal circumstances, but for King Gnu fans, it was all access for this one-night show. The band staff constructed a stage from scratch for King Gnu to stand as the first band to ever perform music there. Out of the 70,000 or so people who were successful to witness the show, only 60 very lucky fans were actually allowed to attend in-person (the rest watched online), and this intimate experience took place on June 5.

Red Bull Secret Gig has taken place at over 10 locations in six countries worldwide, and this was the first time for it to be held in Japan. It took about a month to roll out the megaphone images across Japan from April.

For the concert, the audience were split into two groups at No.2 Sea Fort and transported to the island aboard a small Red Bull Secret Gig ferry from Mikasa Terminal in Yokosuka. It took about 30 minutes for them to reach their destination, during which they could look out at the picturesque bright blue and sun-basked sea. Excitement was high amongst King Gnu’s passengers. Constructed between the mid-Meiji Period (1867-1911) and Taisho Period (1912-1925), No.2 Sea Fort saw the Imperial Japanese Army there before WWII, and later the Imperial Japanese Navy used the island as the key spot to protect Tokyo. The shipping of materials to build King Gnu’s stage began a week before the show started. Lots of mirrors which reflected the silver framework of the stage, as well as megaphones and other decorations, gave a dystopian vibe to the venue.

Both groups of fans were treated to performances at the Red Bull Street Jam until they arrived at the island, which saw Red Bull dancers and artists put on a show of breakdancing, freestyle football, and double dutch sessions. Everyone was off the boat by 15:40, and they didn’t have to wait long for the main act to make an appearance. The sound of steel drums surrounded the crowd, white smoke filled the air, and flames roared high from the stage, signalling the start of what was to be a very special day for King Gnu lovers. The band members rolled up to the stage: Daiki Tsuneta began to strum his guitar while Yu Seki began drumming a tight rhythm. The groove ignited the moment Kazuki Arai entered the music with his bass as the band opened with their first song, Senryo Yakusha. The aggressive sound was offset when Daiki Tsuneta and Satoru Iguchi entered with harmonising twin vocals. The band showed off their dynamic performance skills as they offered both a solid yet explosive showcase. Keeping with the exciting energy, they cracked the gears up as they moved on to Sorrows. The stage lit up in a blaze of flames while black smoke shrouded the stage. It was a breathtaking backdrop to behold as the fire, smoke, stage, and setting itself was akin to a mirage floating in a desolate wasteland. But the smell of the smoke, the heat of the crowd, and most of all the flesh and blood of the band’s performance confirmed to everyone that this experience was indeed real. 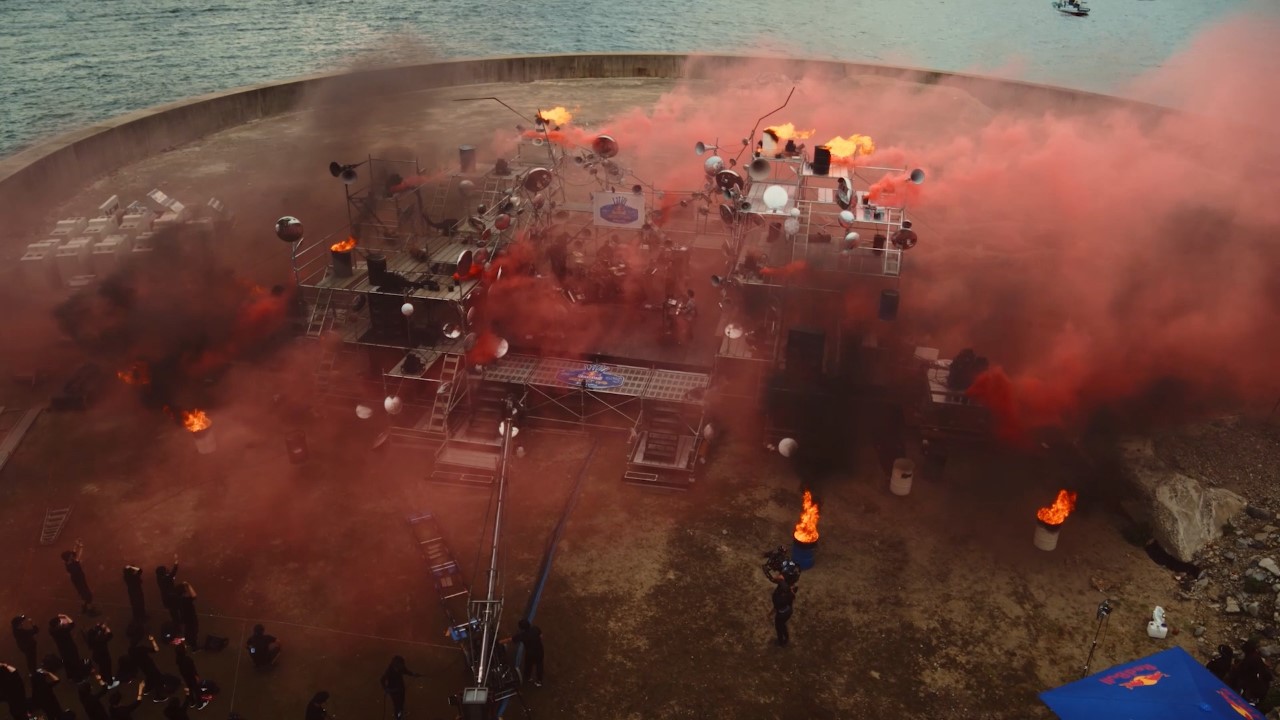 Aerial shot of the concert

From Kasa to McDonald Romance, King Gnu displayed how unique their music is as they elevated the soundscape from the stage to the sky. McDonald Romance in particular stood out, the love song’s exquisite sound combining a gorgeous groove with Kazuki’s transient and beautiful vocals.

After a short interval, the band moved onto Hikotei. The flames erupted for this heated performance, and black smoke poured around the stage, so much so that the band couldn’t see, but this only served to enhance the performance in all its grand and massive sound. Some of the song’s lyrics struck a cord as they reminded one of how our lives have been drastically affected since 2020.

Black smoke turned to red smoke for Slumberland. This performance was the embodiment of King Gnu establishing a new sense of values during this chaotic period we’re going through. What the crowd witnessed was a band able to perform so well in so much smoke, a condition that wouldn’t be able to be replicated in a normal venue. They didn’t falter even once – their musical precision made them seem almost unhuman, or at least that they definitely aren’t ordinary people.

Changing up the vibe, Daiki went ahead for a peaceful piano solo. The sound of a helicopter could be heard in the sky, adding to the otherworldly atmosphere of the show. Daiki began with The Hole, a delicate and beautiful ballad which Satoru provided some synthesiser for. The music had a tinge of pain and uncertainty to it, a compelling message reminiscent of the times we live in today. It was a standout amongst the set list.

White smoke covered the stage once more, and at the same time, Satoru reappeared having changed clothes into a tank top and red half-pants. This of course could only have meant one thing: Teenager Forever. Satoru was dancing and singing around the stage even more than usual, and Daiki joined in without thinking as he sang too. This rock tune is the most youthful-sounding song in King Gnu’s discography, so it was a refreshing thrill to the set.


King Gnu wrapped up the show with Summer Rain Diver. It opened up the beautiful endless sky overhead with its mysterious and alternative sound which sounds almost like a hymn. This musical fusion of dreams and reality served as the perfect ending for the secret show.

The members looked at the crowd with smiles and satisfied looks before leaving the stage. For King Gnu, this was a show that can never be re-experienced.

Two days after the concert, the stage was dismantled and everything taken back, leaving the island floating quietly and solitarily as if nothing had happened. But fans know that of course isn’t the case, as King Gnu made history there as being the first band to perform live. This Red Bull Secret Gig was a once-in-a-lifetime, unprecedented work of art, and quintessentially King Gnu.