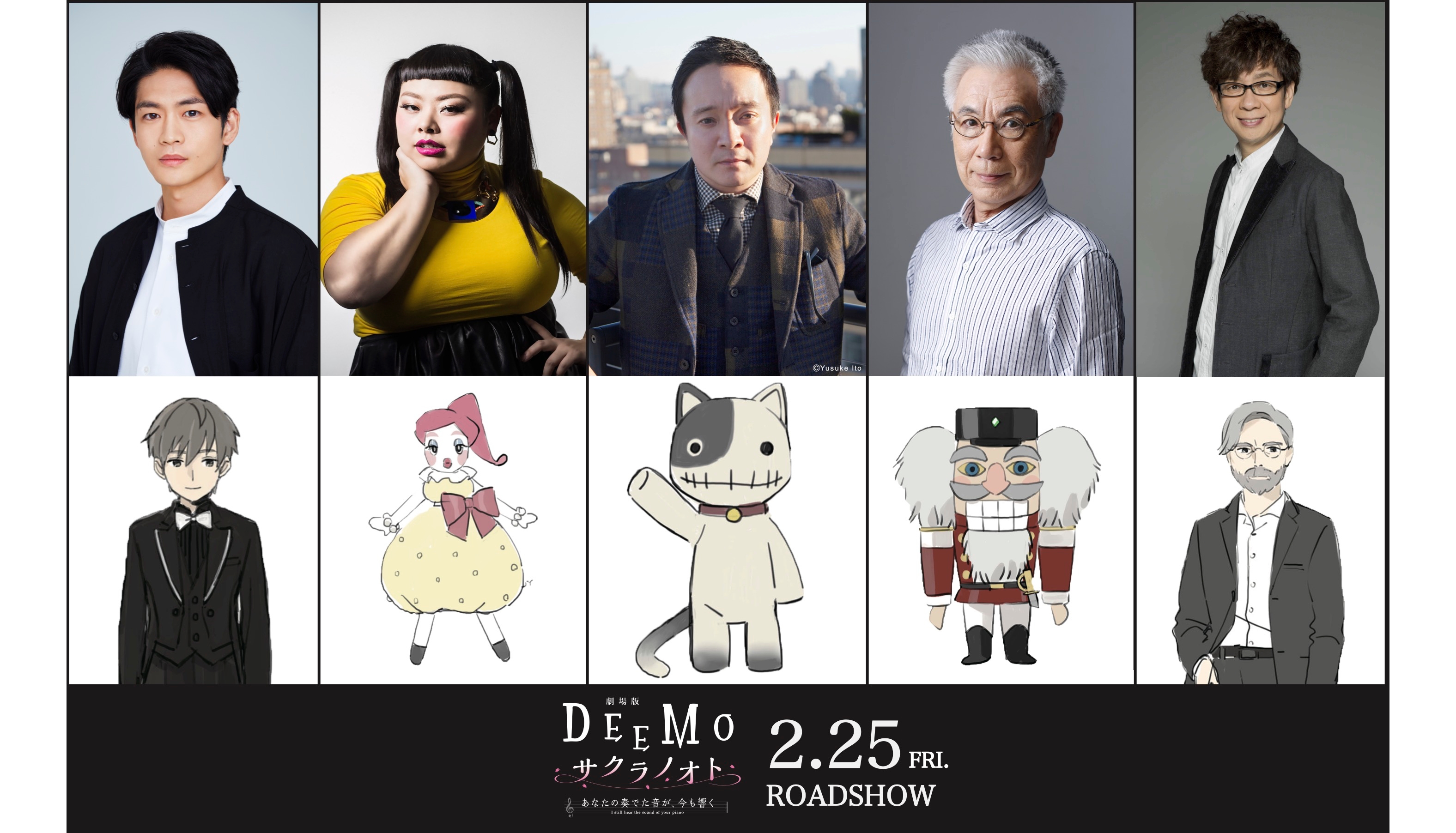 Western video game fans aren’t as obsessed with mobile games as those in the East, but Deemo is one title that has crossed borders. The rhythm game was originally released in 2013 and has been downloaded over 28 million times worldwide on iOS and Android, with Nintendo Switch and PlayStation 4 ports coming in 2017. Announced in 2019, DEEMO Memorial Keys is an animated film inspired by the rhythm game due to release across Japan on February 25, 2022. Previously announced voice cast members include Ayana Taketatsu and Akari Nibu of idol group Hinatazaka46. In addition, Gaku Hamada, Naomi Watanabe, Issey Ogata, Kouhei Matsushita, and Koichi Yamadera have been added to the cast list.

Gaku Hamada will play Mirai, a stuffed cat living in the mysterious castle that Alice, played by Ayana Taketatsu, falls into. He is the leader of the three dolls following Alice on her adventure, along with the Nutcracker and Fragrant Sachet. These characters accompany Alice through the castle as she attempts to retrieve her lost memories.

Naomi Watanabe will take on the role of the Fragrant Sachet, the calmest and most fashionable of the three dolls. The elderly Nutcracker will be performed by Issey Ogata, who is sure to make audiences cringe with his dad jokes. The actor noted that he played the role using his entire body during recording.

Kohei Matsushita plays Hans, a master pianist who lost his parents and currently lives with his aunt and baby sister. The actor played the piano during the recording process, channeling the spirit of the character into his music. Alice’s piano teacher Professor Valensky is played by Koichi Yamadera.

Mirai looks cute, but he has a bad mouth and constantly pokes fun at the other characters. I felt it was an important role, and I was lucky–everyone had already recorded their lines by the time I was in the booth, so it was much easier to get into the right headspace. Hearing everyone’s voices helped me to relax and inspired me to do my best, just like Alice in the film. This movie was created by a group of real Japanese pros. I did my best to infuse Mirai with my own unique personality, so I hope you enjoy it!

This was a type of character I had never played before, so it took me a while to get the role down. So much of the film’s story depended on her lines, and I was constantly nervous that my voice was shaking or that I was slurring my words. I wanted to give her a more gentle voice, and finding the right balance was really tough. The real world is tough these days, and DEEMO is a film that I could so easily lose myself in. I want people who don’t play music games or who have never heard of DEEMO to see it. It’s a movie that reminds me of emotions I haven’t felt since I was a child.

The film tells the story about the heart. It’s a film that allows a person to look within, and to stop and have a conversation with themselves. A new DEEMO will be born! This is DEEMO! I hope that those coming to the theater take the time to think deeply about their own feelings.

Working on DEEMO was my first experience with dubbing, so I was nervous, but the director gave me lots of detailed instructions that made it so much easier. I learned so much. This film has elements of music, movies, and games, so I think it will be entertaining to lots of different people. With so many possibilities, I hope DEEMO will inspire people to dive into the world of music–and the world of anime as well.

An English-subtitled trailer is available to watch on the Pony Canyon Anime YouTube channel. It was originally screened at Anime ExpoLite 2021 in July.