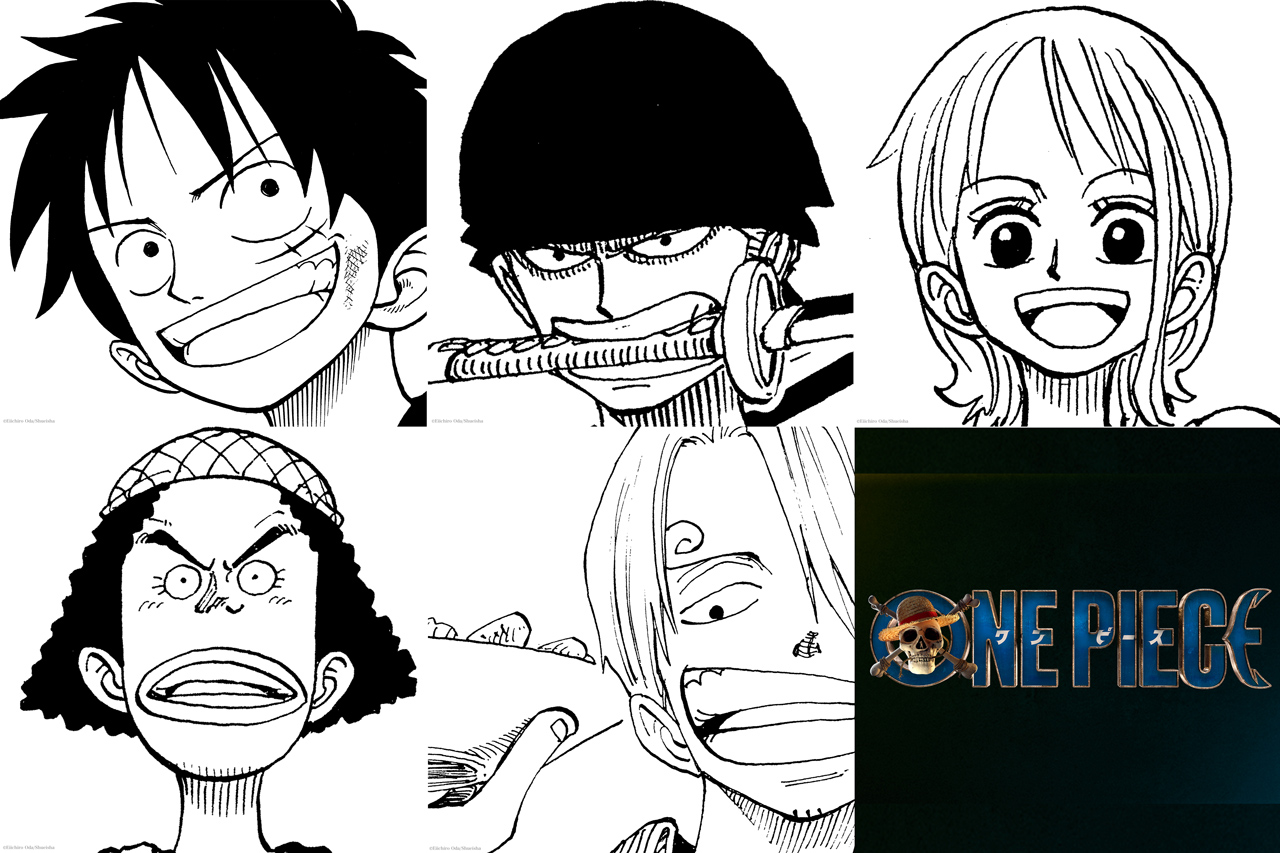 The highly-anticipated One Piece live-action series is coming to Netflix, and the main cast has finally been announced! 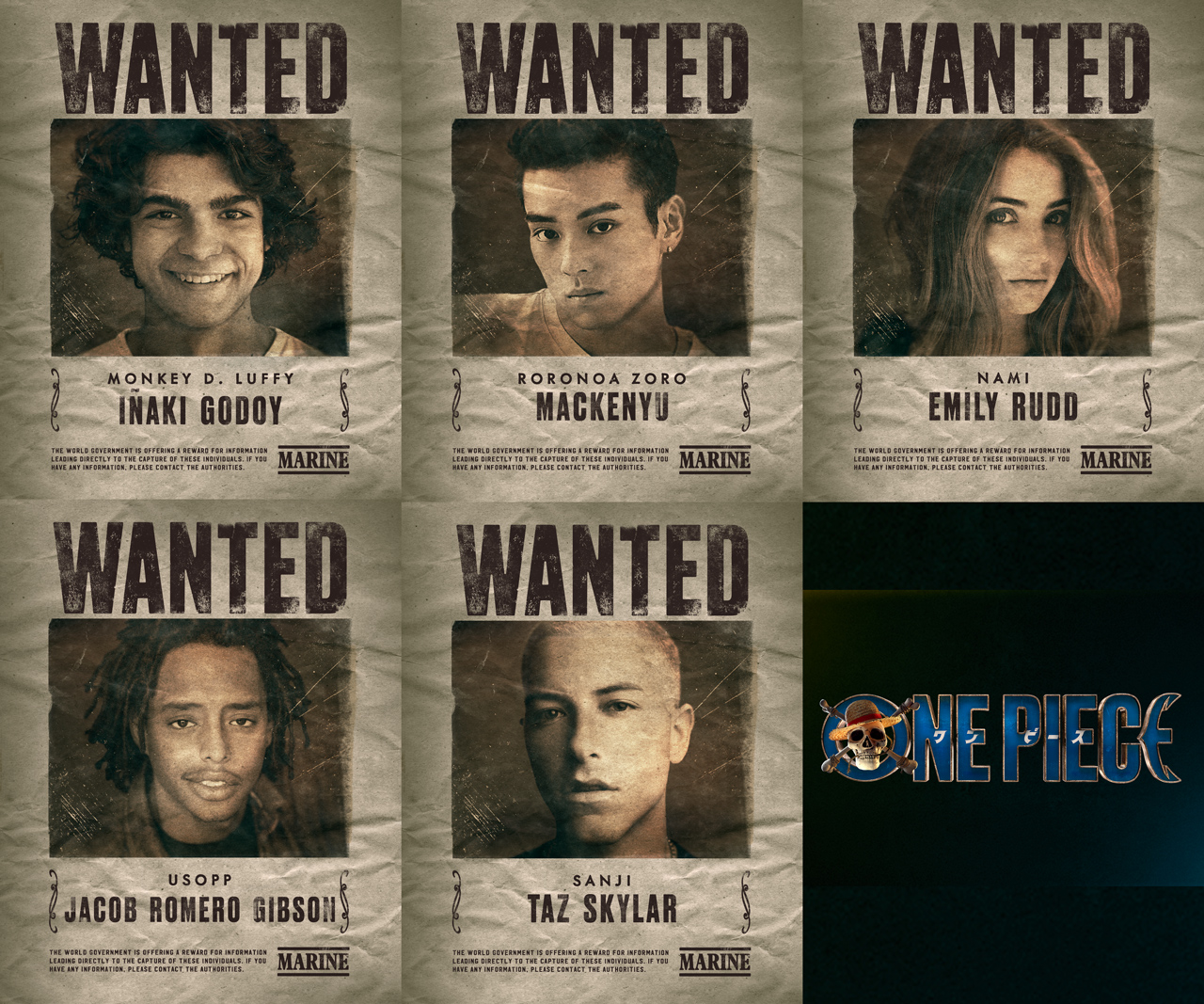 Eiichiro Oda’s manga series has become one of the best-selling manga series in history. Originally published in Weekly Shonen Jump in 1997, the series recently celebrated its 100th volume and will celebrate 1,000 anime episodes in the coming weeks. With over 490 million copies in circulation, Luffy’s adventure is beloved by manga fans around the world.

The story follows the many adventures of Monkey D. Luffy, a boy whose body gained the ability to stretch like rubber after eating a Devil Fruit. Along with his faithful crew of Straw Hat Pirates, Luffy explores the famed Grand Line in search of the ultimate pirate treasure, known as ‘One Piece.’ Gaining this will make him the King of the Pirates.

Monkey D. Luffy will be played by Iñaki Godoy, Zoro will be played by Mackenyu, Nami will be portrayed by Emily Rudd, Usopp by Jacob Romero Gibson, and Sanji by Taz Skylar. To promote the announcement, the popular wanted posters seen in the series were updated featuring the actor’s faces. Original manga author Eiichiro Oda also issued a statement: “The face, the size of the mouth and hands, the atmosphere, the gestures, the voices, the acting ability, the height, the friendship…! These cast members were chosen after much discussion with staff from around the world, and these are the ones who will become the Straw Hat Pirates!”

A One Piece live-action project had been kicked around before but has finally come to fruition after Oda and other members of Shonen Jump staff were convinced that it could be done well. Godoy, who will portray Luffy, has attracted attention for his skills in the popular drama series “Who Killed Sara?” Japanese actor Mackenyu, who will portray the sword-wielding Zoro, is one of the leading young stars in Japan. Emily Ladd has received accolades for her work in Fear Street and Hunters. Jacob Romero Gibson has appeared in a number of high-profile foreign dramas and is known for his ability to adapt to different roles. Taz Skylar has the perfect cool-guy look to play chef Sanji. This project is sure to attract attention from all over the world, and people are holding their breath, hoping that Luffy’s story can be brought to life in the best possible way. 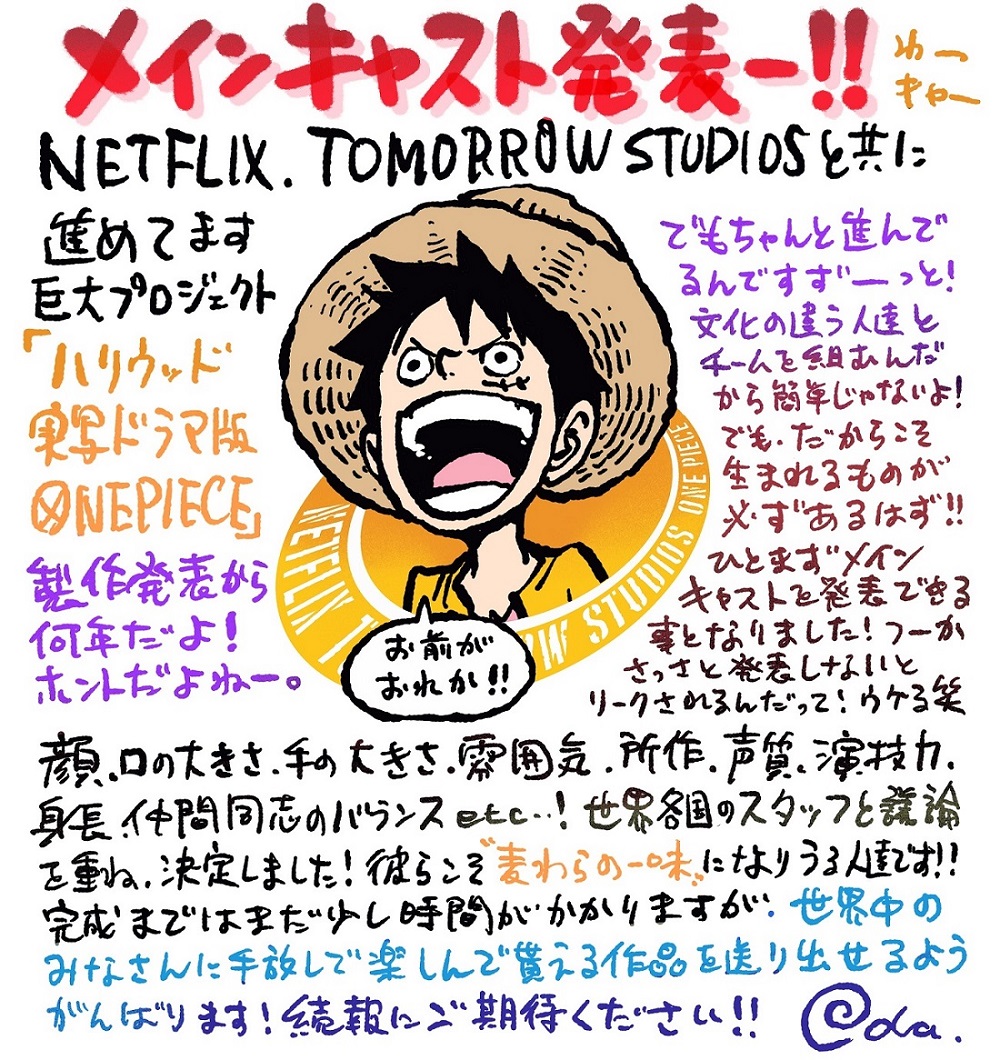 “We’ve been working with Netflix and Tomorrow Studios on the massive project that is the Hollywood live-action series adaptation of ‘One Piece!’ How many years has it been since it was announced, right? I know, I know! But rest assured we’ve been making steady progress all along. It’s not easy when you’re working with people from different cultures! But it’s precisely that process that can yield something special! For now, we’re able to announce the main cast! Rather, we need to hurry and announce it, or else it’ll be leaked, apparently! Hilarious, lol. Their face, the size of their mouths and hands, their aura, the way they carry themselves, their voice, their acting skills, their height, the balance amongst the Straw Hat Crew, etc…! We decided on this cast after numerous discussions involving people around the world! These are the people who will be our Straw Hat Pirates! It’ll take a bit more time to get this show done, but we’ll continue to do our best to deliver a show that we’re confident will be enjoyed by everyone around the world! Look forward to more updates in the future!”

“We are so excited to set sail with this amazing and talented cast. Finding the right people to pull off the looks, emotions, and actions of the iconic Straw Hats was a long and challenging (and fun!) process. Much like the search for the One Piece itself. But we have finally found the perfect fits! They have already begun working very hard to bring these characters to life. You will come to know and love them just as much as their manga counterparts. All of us can’t wait to show you what we’ve come up with! Onward to adventure!”