A “delicious and fun” restaurant which offers Japanese traditional cuisine will open in Ebisu! 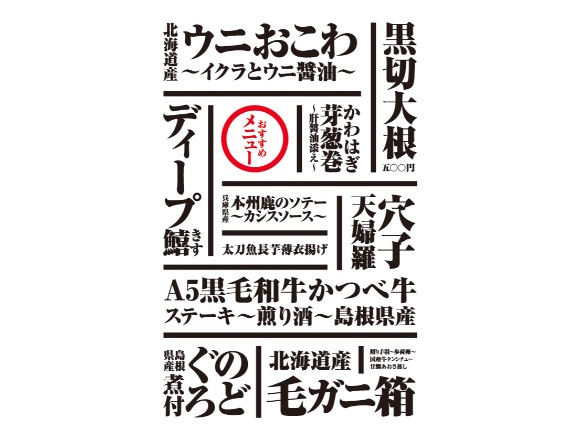 “Kappo Akemi” which will offer traditional Japanese cuisine will be opened in Ebisu from the 13th of September, 2017 (Wed.)

Full-fledged dishes will be created by the restaurant’s chefs under the direction of the head chef who trained in a long-stablished Japanese restaurant called “Nada Man.” However, the restaurant itself and the menu items are not fancy. The restaurant will offer a wide variety of dishes from standard Japanese dishes to original dishes. It will be a unique restaurant where you can enjoy your mealtime from before eating your meal.

【Examples of the menu items】

Some of the menu items have unique names but all of them are very delicious. Why not visit the restaurant and check out the taste of these dishes. Most of the ingredients used in Kappo Akemi are gathered from their special palces. Unique and rare ingredients such as fresh fish and “Kokuryu Ginjo Buta” (pigs, a little drunk because they are raised on sake) are used in the restaurant.

The most recommended ingredient is “Katsube Gyu,” black cattle produced in Shimane Prefecture. The quantity of this cattle is only about 10% of Kobe Gyu or Omi Ushi and thus the cattle is called as “the phantasmal cattle.” This breed of cattle has received many awards and you can enjoy this rare meat in many different ways, the method of cooking changing according to the season.

There are many seats in this restaurant in addition to counter seats. For those of you who want to enjoy your meal as you chit-chat with your friends, you should choose table seats. The restaurant can be used on many different occations such as on a drinking session, a date or business entertainment.

The “Handachi” (half-standing) seats are unique. You can sit on a high seat and table and enjoy your meal in a casual fashion. These seats are handy when you want to eat something before going back to home after work or eat your meal in a short amount of time.

Counter seats are very special. You can enjoy your meal while watching the the head chef’s cookery techniques. It will be a rare and good experience to watch the beautiful job of the head chef and listen to stories regarding the ingredients of the dishes.

Why not enjoy a meal in a very comfortable restaurant.

Holidays: No holidays in September