A cool “kendama (Japanese cup-and-ball game)” created by KENDAMA TOHOKU and KROM from Denmark was released. 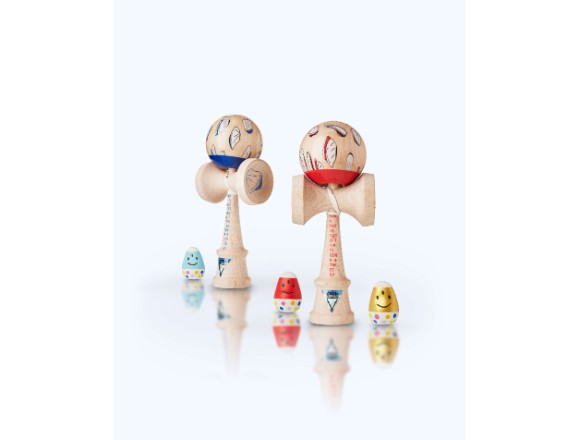 BEAMS started a project called KENDAMA TOHOKU which was created under the theme of “creating business and news continuously in the devastated areas of the Tohoku Earthquake and released a collaborative kendama with KROM (a kendama brand created by the professional kendama player in Denmark” called “KROM×BEAMS O.K. Kendama for KENDAMA TOHOKU.” The theme which the creative director of BEAMS Magoshi Minami presented was “Okiagari Koboshi (small monk that does not fall).” Thorkild May, the founder and CCO of KROM designed the swinging face of the koboshi using the third smiley face that his creative team designed.

The spirit of Okiagari Koboshi which regains one’s feet no matter how many times it falls over inspired the creative team so the words which represent the spirt of Okiari Koboshi is illustrated in the product. The small Okiagari Koboshi that comes with kendama is an Aizu Hariko created by “Nozawa Mingei,” a folk-art maker. KROM’s design of the third smiley face which was also used in the kendama and it was depicted by the artisan Nozawa Mingei. The collaborative product with KENDAMA TOHOKU “Okiagari Koboshi” is very cute. As a donation to the charity organization, Higashi Nihon Daishinsai Fukushima Kodomo Kifukin, $3 (US) (per kendama / from KROM) and 55 yen (per one Okiagari Koboshi / from Nozawa Mingei) will be given to the foundation.