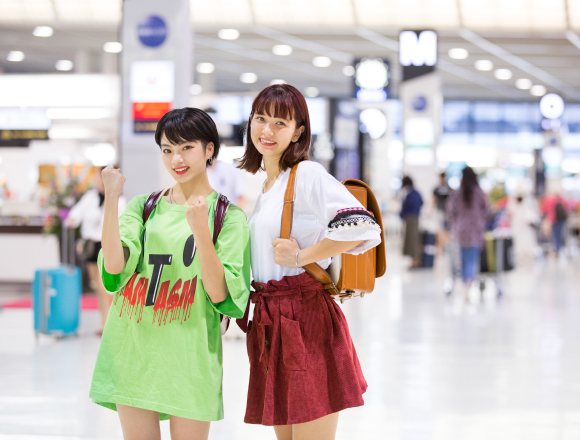 Many people find themselves with a lot of free time when at Narita Airport, whether in transit or going back home, and must find things to fill the time with. In this edition of Tokyo Stroll, we take a look at some of the best tourist spots around Narita Airport to fill your time with if you find yourself in this situation.

From visiting temples to buying souvenirs, the surroundings of Narita offer a range of exciting things to make those long hours fly by! Let’s take a stroll together with Yuna Yabe and Eri to see some of the wonderful sights. If you have a spare 2 or so hours to kill then Naritasan Shinshoji Temple is a great location to stop by. Simply board the Limited Express train from Narita Airport via the Keisei Main Line and get off at Keisei Narita Station. The journey is just 10 minutes. What greets you as you approach the shrine is a 15 meter high gate constructed from keyaki wood. Many people enter through this gate to go and worship at the main building.

As Yuna and Eri walked toward the main building through the Niomon Gate they came to the Nioike Pond where turtle-shaped rocks were poking out of the water. There were lots of turtles sunbathing on top of the rocks. Legend says that if you throw a coin onto one of the rocks and a turtle goes onto the same rock your wish will be granted. You can see lots of coins on the rocks. Once you pass the pond and climb the stairs you will arrive at Naritasan Shinshoji Temple’s main building. The Goma Ceremony has been practiced at the temple every single day since its founding. People’s prayers are offered to Fudomyoo in front of a fire to fulfill people’s worries and wishes. After praying, Yuna and Eri received a temple seal for their goshuincho temple seal notebook. They also got their hands on an omikuji each. They opened it up, and… both of them received “Great Blessing,” the best fortune you can receive from an omikuji! The omikuji have English written on the back too, so be sure to flip yours over if you can’t read Japanese. Naritasan Shinshoji Temple also has a number of designated important cultural properties, so there’s plenty of amazing architecture to see if you visit. If you’ve got some spare time while in transit, then how about taking some time to learn some Japanese history?

Get souvenirs at the AEON Mall only available in Japan!

While you can get your hands on souvenirs at the airport, it wouldn’t be wrong to assume that most people want something sold only in Japan such as snacks or other little trinkets. The next spot we’re taking a look at is the Narita branch of the AEON Mall. You can get a direct bus there from Narita Airport. Buses also leave from Keisei Narita Station, the closest station to Naritasan Shinshoji Temple.

The AEON Mall has it all – clothes shops, entertainment facilities, sundries, food and more. It’s perfect for shopping with friends or having fun together with your family at the entertainment services. It’s equipped with just about anything for anyone to enjoy.

We recommend doing your souvenir shopping at AEON Mall. And what better to spend your money on that Japanese snacks!

The most popular snack bought by travelers is the baumkuchen cake. It’s packed with just the right amount of sweetness. You can get a full, uncut cake in its distinct round shape, or you can get individual cut pieces in bags.

One of the big snacks to buy from Japan is matcha flavoured Kit Kat. You can get this and many other flavours of Kit Kat at the AEON Mall. There are even limited edition seasonal flavours that are sold with the changing seasons, so make sure to be on the look out.

Besides snacks, cosmetics are another popular item. The AEON Mall is lined with a string of different brands who also offer testers of their products. There are plenty of affordable items to find in the line-up perfect as a gift to a friend. The best way to find something you like is to just get in there.

People from all over the world visit the AEON Mall in Narita so there are duty free counters. It’s possible to get tax exemption from items purchased in the mall. There’s a counter near the 1st floor beauty products corner so make sure to head there once you’ve bought something. After a long day of sightseeing and shopping, we’re back at Narita Airport. Did you enjoy seeing some of the tourist spots around the airport?

Narita Airport also offers the Transit & Stay Program for people who have long layovers, so be sure to check it out and make the most of your time there.

Next » Made in OME: Japan’s Millennials Promote Micro Tourism Project For Ome in Tokyo