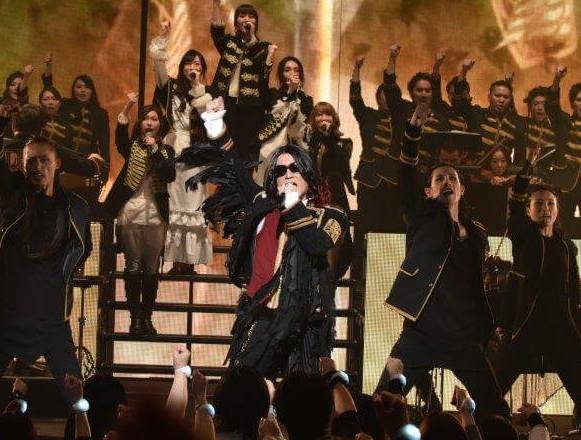 The colossal screen at the back of the stage pictured humanity and the towering wall that defends them from the threat outside it. The only thing audible was the sound of wind in every direction. Upon entering the venue it was as if being transported straight into the world of “Attack on Titan.” The audience waited in anticipation for the show to start—”Is it starting yet? How about now?”—as if they had dreamed of the young soldiers from the story departing beyond the great wall. When the time finally came, a film began to play on screen that realized that very dream, with the camera’s perspective scaling over the wall and heading through the dark forest before arriving at a crimson coloured ocean. That’s when Linked Horizon’s hero, Revo, stood on stage. The tour began back in July and this final date marked the 34th performance – a long 2 month wait that fans had been waiting for. The tour brought to life the world of Attack on Titan like nothing before it, with the story itself and the lyrics of Linked Horizon’s music tying themselves together. The set list began with “Moshi Kono Kabe no Naka ga Ikken no Ie da Toshitara,” “Guren no Yamiya” and “14 Moji no Dengon,” all of which follow the show’s protagonist Eren Jaeger and his fight to advance from a boy to a member of the Survey Corps. Scenes taken directly from the anime were shown alongside the live performance to relive his growth. The anime opening video was shown as the internationally recognisable season 1 opening song for Attack on Titan “Guren no Yamiya” was performed – with everyone screaming the famous “Jaeger!” part of the song. This was followed by the uplifting “14 Moji no Dengon” which reminds everyone of Eren’s mother, who put her life on the line to protect her beloved son. The entire concert encapsulated everything contained in the show, from the loving warmth to the rage, the sadness and difficulties, enabling the audience to experience those feelings once more.

The middle section of the concert included the theme songs “Guren no Zahyou,” “Jiyuu no Tsubasa” and “Jiyuu no Daishou” from the Attack on Titan anime movies, followed by “Saigo no Senka,” “Souyoku no Hikari” and “Kanojo wa Tsumetai Kan no Naka de” which tell of the life and deaths of girls in the series and their hardships in battle. The 5 girls in charge of solo vocals brought the world of Attack on Titan to life in a magical way. “Kami no Miwaza” was also performed with a choir, and the audience were invited to sing the part of the worshipers and link arms with the people next to them as if in prayer. The idea to not only submerge the concert in the music and visual aspects of Attack on Titan but to actually be involved with it was an enthustiastic suggestion by Revo himself. The final part of the performance was graced by the opening song to season 2, “Shinzou wo Sasageyo!” The audience of course joined in with the chorus, singing “Sasageyo! Sasageyo!” and throwing their fists in the air, bridging the gap between the performers and the fans in the crowd.

For the encore, after two Sound Horizon songs, the opening theme song “Seishun wa Hanabi no You ni” to the spin off series “Shingeki! Kyojin Chuugakkou” was performed, with a festive-like air to it different from the main part of the performance. All of the band members, singers, dancers and choir said their goodbyes until it was just Revo on stage.

“I still don’t know what’s fitting to say when talking about ‘him two months later.'”

In the tour pamphlet and in the latest edition of Shonen Magazine, Revo noticed that there was no indication that the “him” written was regarding Eren.

“But then I thought: the song continues to stand by it. ‘Guren no Yamiya’ is Eren’s theme!” Although this is the final date of the tour, it has been announced that another tour titled Live Tour “Shingeki no Kiseki” Souin Shuuketsu Gaisen Kaijou will take place next year on January 13th and 14th. It promises to bring together the success of this project which was initiated by Linked Horizon 5 years ago.

Now we eagerly await to see exactly what they have planned for this Yokohama tour.

*Please refrain from contacting the venue for questions related to the tour.