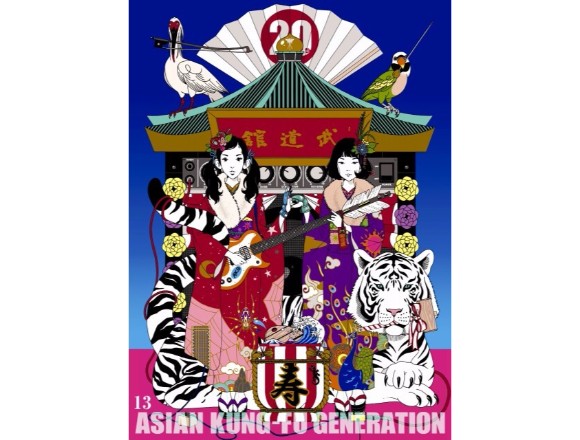 ASIAN KUNG-FU GENERATION is the band which released “the 13th video work ～Tour 2016-2017『20th Anniversary Live』at Nippon Budokan～,” a work including the videos of the 20th anniversary tour and the live held at Nippon Budokan on the 29th of November (Wed.). They have held several joint gigs including the live with the band from the UK called FEEDER which reached its 20th anniversary this year and the live with androp and CreepHyp (first time) at Miagi/SENDAI GIGS.

The band also performed an unreleased track included in the album that they are working on. One of the songs included in the latest album “SLEEP” is the first song offered by FEEDER’s Grand Nicolas (vocal and guitar).

This poppy punk song delivers a message of hope for the future and presents a cynical opinion with regards to our current society with a beautiful and light melody line.

The new song will be performed with the creator of the song FEEDER.

In the live held on the 2nd of December (Sat.), Masafumi Goto commented as follows. “I think this tour is a very important tour because it is being held in various cities, not just Tokyo and Osaka. Taka (Taka Hirose – bass) of FEEDER has been sending us many messages since the Tohoku Earthquake occurred. And I know that other members have been thinking a lot about Japan. I am very pleased that we could held with this joint gig.”

※Drink fee is not included

※Children who are not in school cannot enter the venues

※What is PlayPASS? / A system where you can play videos on your smartphone by adding the PlayPASS cord attached to Blu-ray / DVD.