12 cutting-edge artist groups will be performing to commemorate the 5th anniversary of the record label unBORDE – CD artwork for the new album ‘unBORDE all stars’ has now been announced! 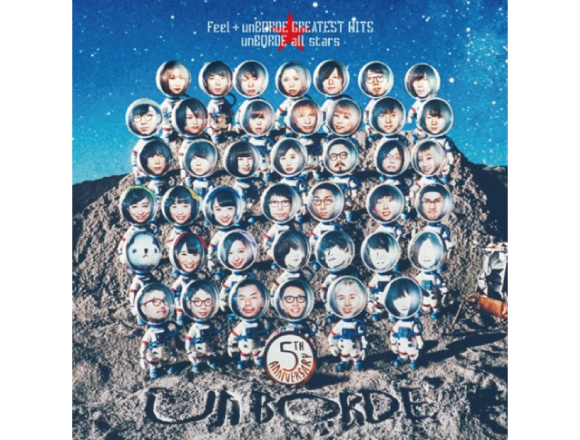 Modern, edgy, unique artists who reach out to fans not only in Japan, but also overseas will be joining forces to celebrate their individual successes with the record label unBORDE(アンボルデ).

On 21st December 2010, unBORDE was established as a sublabel of Warner Music Japan and now, in order to celebrate the 5th year anniversary of this record label, individual artists and artist groups who have been working with unBORDE have been gathered together to form ‘unBORDE all stars’. The new CD ‘Feel+ unBORDE GREATEST HITS’ produced for this commemoration will be released for sale on March 9th.

The variety of artist groups and solo performers who will be contributing to this commemoration as ‘unBORDE all stars’ have reached out to fans not just in Japan, but all over the world. These performers are; AKASICK (アカシック) , Androp, indigo la End, CAPSULE, Kyary Pamyu Pamyu, Gesu no Kiwami Otome, Shinsei Kamattechan, Yu Takahashi, Team Syachihoko, tofubeats, Passepied and RIP SLYME.

The artwork for the CD presents all 41 participating artists as astronauts, with the moon’s surface as the background. The first press copies will include the same artwork as used for the CD jacket for the 5 year commemoration CD and a booklet including photos taken during the recording of the new song ‘Feel’. Photos have also been used to make a special mini collage poster of over 200 precious photos.

The song ‘Feel’ was composed by Yasutaka Nakata (CAPSULE) and the lyrics were written by PES(RIP SLYME). The unique contribution of the artists of unBORDE has resulted in the production of a fine song, which demonstrates the unshakeable presence of unBORDE in their lives. It has been decided that the song ‘Feel’ will be included for sale on the new 5 year commemoration CD, selling now at the price of ￥1,000!

On 10th April, for a collaboration with Coca-Cola, the artists will also meet again to perform at ‘Coca-Cola presents unBORDE 5th Anniversary Fes 2016’, a large scale festival which will be held at Makuhari Messe Event Hall – the video teaser for this event has been released! It has also been announced that newcomers to the record label which include TENSAI BAND and Livetune+ will also be performing at this event!

The tickets for this festival are based on invitation only. To apply for a ticket or for further details, please access the official Coca-Cola website which can be accessed here: cocacola.jp, or alternatively, visit Coca-Cola East Japan Co Ltd website : ccej.co.jp

Please check out links below and keep an eye out for unBORDE!

■To find out how to purchase a ticket, or for more information, click here!
↓
Coca-Cola official site
cocacola.jp