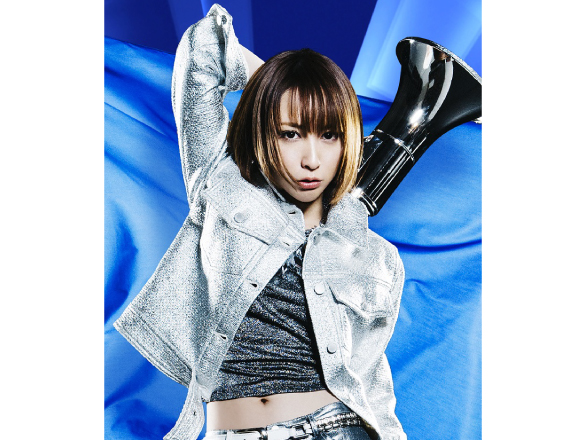 Aoi Eir is a much talked about female singer who has provided tracks used as the main theme for a long string of anime series, and who performed on the national music television program “Music Station”. Celebration 5 years since her debut, we will look at her high-spirited charm and ever-increasing glow.

Carving her own path
Born in the City of Sapporo in Hokkaido, Aoi Eir’s interest in music was influenced by her parents, which led to her starting a band during her school years, spawning a never-ending love and interest for music.
But while she was living in Hokkaido, she was unable to find friends to simply go and eat with due to her passion for music, which resulted in her desire to advance on her musical journey, as well as her visible steady future, looking hazy, and those strong and sound feelings began to shake.

In the midst of her doubt, she posted a video onto a video-sharing website, which was soon to be the impetus of a huge change to her fate.

The first post was extraordinary and had a real sense of stability. She rarely uses falsetto, and is known for her natural and powerful high-pitched singing voice. It was this ability she held which had her come to meet songwriter Yasuda Fumio in Hokkaido.

She first used the name “Eir” on her track “frozen eyez” which was released in Vol.5 of the anime magazine “Lisani” in April 2011. Later than year, in October, she made her major debut with the song “MEMORIA” which was used as the ending theme for the immensely popular anime series “Fate/Zero”. The major debut track was featured in the TOP 10 for the Oricon Weekly Singles Chart which opened the doors for her to a new and spectacular start as a singer.

An unstoppable force: A new face to the world of anime songs
Aoi Eir went on to release a string of tie-up songs for various works, including “AURORA” (used as the opening track to the 2012 anime Mobile Suit Gundam AGE from ep.40 onwards), “IGNITE” (used as the opening song to the 2014 anim Sword Art Online II: Phantom Bullet) and more. She has even realised a number of her dreams, including being able to provide the ending theme for the 3rd Dragon Dragoon RPG game, which she announced publicly she is a fan of.

Aoi Eir will not be stopping producing songs for the world of anime and games any time soon, having released her new single “Accentier” recently on March 2nd, 2016. The song is used as the main theme for the game “Digimon World -next 0rder-”.

An obsession with the stage: The reasoning for Aoi Eir’s worldwide recognition
When she started out, Aoi Eir always hid the bottom half of her head, leaving her an utter mystery to everyone, but she soon desired to create chances to meet with her fans face to face ASAP. She publicly announced along with the release of her 2nd single “AURORA” that she wishes to perform live more than anything. She successfully held her first one-man live concert in 2012.

Aoi Eir went on to focus largely on her live shows each passing year, which eventually led to a Spring tour in 2015 where she toured Japan and played in 9 different cities. She subsequently made a giant leap that year and performed for the first time ever at the Budokan in November 2015 to a huge success.

Her year didn’t stop there. Aoi Eir even embarked on a world tour titled “Eir Aoi WORLD TOUR 2015 -ROCK THE WORLD!-” where she played in 10 different cities around the world. She attended various Japanese culture-themed events, including Japan Expo in Paris, as well as performing in Singapore, Taipei, Hong Kong and more, all of which were one-man concerts. She received enormous and overwhelming responses for each of them.

Her popularity overseas is the real deal, as evident in “YouTube for Artist”, which shows where in the world an artists’ videos is most popular. To a huge surprise, Japan isn’t the place where her videos are most watched. That title goes to Thailand. America is in 2nd place and Japan in 3rd place.

You might ask why Aoi Eir has received so much attention from people. That reason would be for the strength of every single one of her live performances. In a word, since each favourite song for people varies from place to place overseas, those fans receive information from the staff on how best to show their excitement and have fun, something which is carefully considered for each show.

Moreover, since fans differ, be it at a Japan themed event or an anime themed event, the staff are well attuned to coming up with the best set list possible. It can also be said that it’s because Aoi Eir herself also has a deep understanding of Japanese culture that the concerts are so successful.

Aoi Eir’s next objective is so set forth on an arena tour. No matter the size of the venue, she wants to express her feelings to every fan. That is the kind of stage performance Aoi Eir holds onto and treasures more than anything. Do not take your eyes away even for a minute from this unbelievable artist.