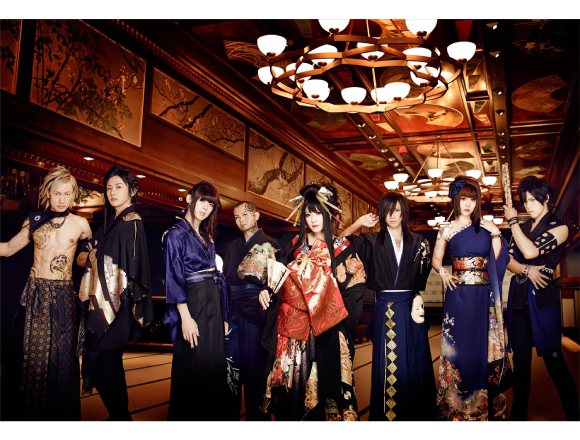 Wagakki Band hold a new vision for rock entertainment, fusing together traditional poetry and Japanese music with rock. In this segment, MOSHI MOSHI NIPPON boast Japan’s music culture to the world by picking up a fitting artist and providing a succinct break-down of their charm. In this segment, we take a look at Wagakki Band!

The Master List: Taking them One by One
Whether in their sound, music video or live shows, Wagakki Band never fail to stir us into a frenzy with their exciting performances. Just how in the world are they able to provide such overwhelming performances? Of course, it is because of the band’s members. In order for us to get to know them, take a look at this ‘shortcut’ list.
These are the members of Wagakki Band!

Yuko Suzuhana – Vocals
Yuko started playing piano when she was 3 and studied Shigin when she was 5. She graduated from the Tokyo College of Music in piano and also holds qualifications to teach Shigen. She has placed top place in national Shigen recital contests and is also active as a singer-songwriter and pianist. Yuko was also chosen as Miss Nico for Miss Nico-sei in 2011 for strength and beauty. Moreover, she is the vocalist (Shigen) and pianist for the 3-member traditional Japanese unit “Hanafugetsu”, which was formed after she won Miss Nico. “Hanafugetsu” developed more and this is where Wagakki Band was born.

Kiyoshi Ibukuro – Koto
During his time at high-school, he was dispatched by the Agency for Cultural Affairs to China where he began his performing. Since then, he has performed overseas in 8 countries, including Vietnam, Iran, Qatar, Kuwait and South Korea. Thanks to his skills in playing the koto, the scores he has written for songs have also been published, which is most certainly a great accomplishment for him as a musician. He is also a member of “Hanafugetsu”.

Daisuke Kaminaga – Shakuhachi
He started playing the shakuhachi at the age of 18, and has since had the experience of playing overseas across 10 countries. He has a history of playing at some of the world’s biggest music conventions including Japan Expo and Japanese Lounge Night. Not only that, he even teaches the shakuhachi at universities and various educational institutions, further proving his skillful abilities. Conversely, he is also active in the field of game music, making him a very unique artist. He is also the leader of “Hanafugetsu”.

Beni Ninagawa – Shamisen
Beni started out learning folk songs at the age of 4 and placed top place in a number of contests. She began to hone his skills in the shamisen when she injured her throat at the age of 15. In addition to having participated in a plethora of sessions with his shamisen, she has posted videos of herself of video sharing websites covering anime and vocaloid songs, displaying to us the diversity of her musical scope.

Kurona – Taiko
Began playing Taiko when he was 3 and was an already an elite by the age of 9 having been placed in the pro rankings for Tokyo taiko. He has performed taiko in over 15 countries, playing a variety of genres, participating in artist sessions and recording sessions.

Machiya – Guitar
Machiya has gained overwhelming popularity as a guitarist on Nico Nico Douga from posting guitar covers, with his view count surpassing 1.3 million. He is active as a guitarist and vocalist in the band “ma:a.ture” and also provides vocals for Wagakki Band. Moreover, his activity has spread to having wrote and arranged the song “Susume! Otowa Shoujotai” on the album “MIRACLE MYSTERY TOUR” for the band “Earphones”.

Asa – Bass
Don’t let his looks fool you; although he has wears girl make-up, hair and fashion, and also has a girly name, he is very much a male. He is an active Vocaloid user, going under the name of Vocaloid-P. His Vocaloid track “Yoshiwara Lament” has over 1 million views! He also writes novels. Asa has also been in charge of the chorus for the Wagakki Band version of “Yoshiwara Lament”.

Like Machiya, Wagakki Band drummer Wasabi gained immense popularity for his covers on Nico Nico Douga, which included rock, pop and many other genres. He performs with his top half naked which displays writing down his back written in Indian ink. Despite being the youngest member of the band, he has outstanding technique. The combination of his high-speed double bass ability together with fellow member and taiko drummer Kurona is one of Wagakki Band’s stand-out features.

Well, what do you think? Even if you’ve only read this small profiling of the members, you can most definitely think “these guys are awesome!” Seeing is believing; a picture is worth a thousand words. If you have become even a little interested in the band from reading this, be sure to check out Wagakki Band!

Wagakki Band were well recognized before their debut by performing covers of various Vocaloid tracks which earnt hundreds of thousands of views. They made their debut with their first album “Vocalo Zanmai” in April 2014. They reached 5th place on the Oricon Weekly Rankings and successfully stayed in the TOP 100 for 22 weeks after the release of the album. Their track “Senbonzakura” has gained a staggering 40 million views, and that number continuous to grow. 40% of the views have come from audiences overseas and the video holds more than 20,000 “likes”, providing their immense worldwide popularity.

Their second album “Yasou Emaki” released in 2015 and hit first place in the Weekly Oricon Charts. With their fusion of traditional Japanese music and rock, and their leading-edge activity in music culture such as Vocaloid, Wagakki Band continue to cause riot and lead the times with their completely original sound.

Wagakki Band began their 2016 national Spring tour in the second half of April. Beginning their invasion in Nagoya on April 23rd, May 28th onwards will see them head to Osaka, Fukuoka, Hiroshima, Sapporo, Niigata, Tokyo, Sendai and Takamatsu. Once this article has been posted, the band will have just finished another performance. They have already sold out plenty of their dates, so if you get the opportunity, do not miss out on your chance to see the performance of a life time.