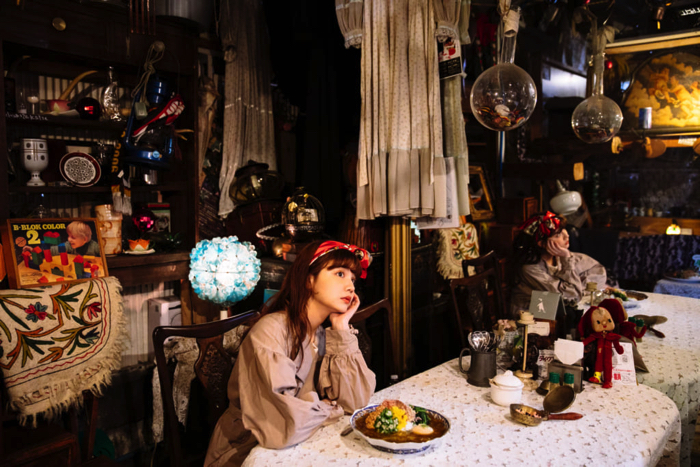 Rinko Murata loves all types of curry. In this edition of Tokyo Dinner, she invites the person she wants to meet up with the most to eat the curry she’s been wanting to eat the most.

This month’s notable restaurant she stopped by was HEIJITSU HIRU DAKE in Kōenji, Tokyo. Their curry portions are generous and are good for the stomach and satiety center. They serve a curry flavoured with Japanese dashi, or ‘stock.’

How do you spend your early afternoons when you have time off? Lounging around at home with quality time to yourself sounds like a good plan. Definitely appealing.

But this is a rare opportunity. How about going on a little adventure to try something you can get a kick out of because it’s midday and a weekday?

I know the perfect curry house for your hungry selves. HEIJITSU HIRU DAKE.

As the Japanese name suggests, it’s a curry that can only be eaten at lunchtime, a mysterious dish that doesn’t appear on regular days off.

I land in Kōenji, a place I love the most. Even though iKōenji is Kōenji, the closest station to the restaurant is Higashi-Kōenji Station. 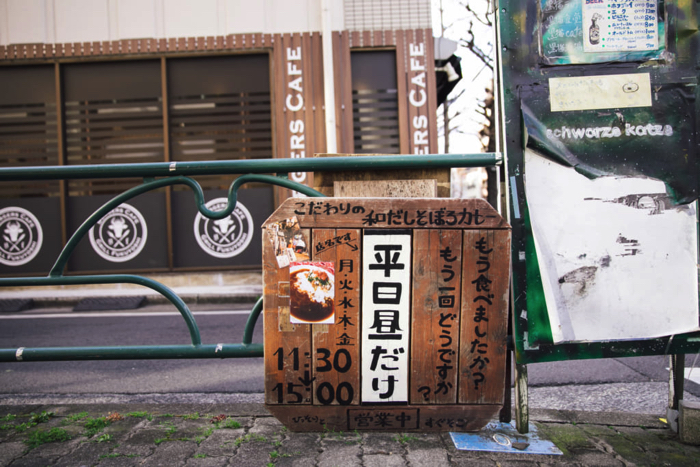 My vision is filled with all kinds of sights. 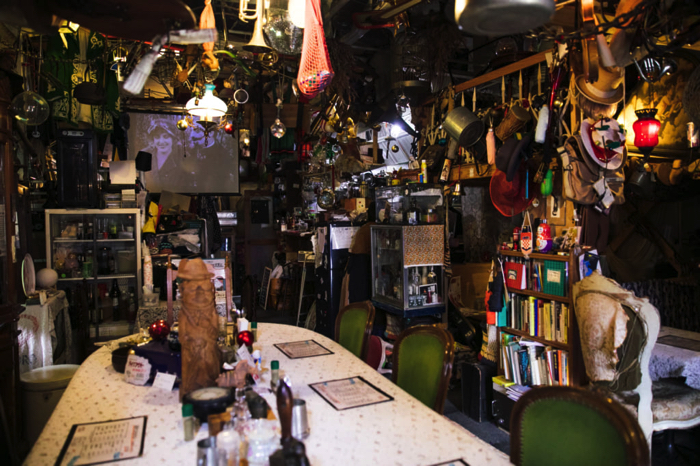 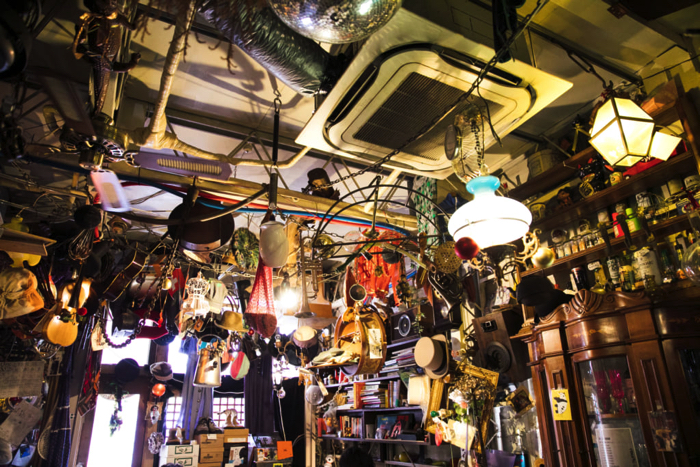 This place is actually normally a café and goes by the name Schwarze Katze. It’s open mainly on Friday night, weekends and holidays. “HEIJITSU HIRU DAKE” runs in a rented room in the café and and is open when the café is. It’s kind of luxurious to have the chance to eat my favourite food (curry!) in a place like this. 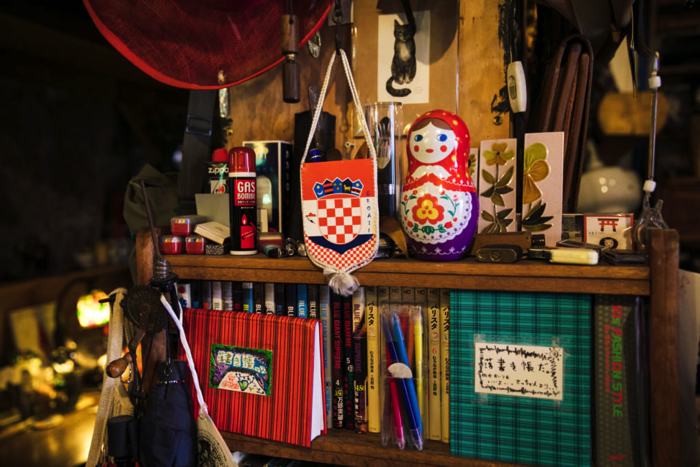 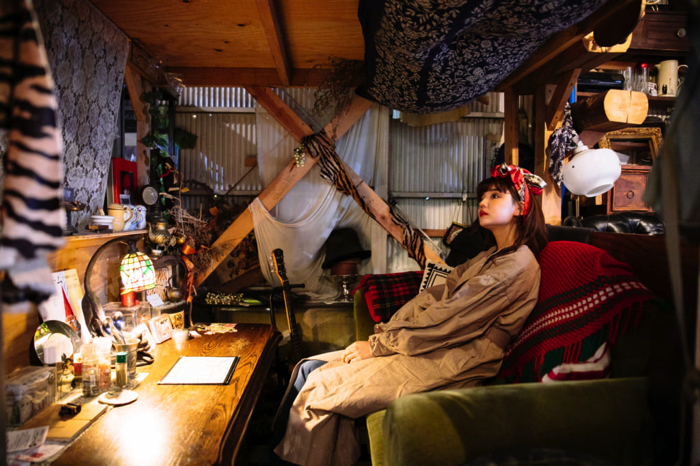 My heart desires the Wadashi Soboro Curry (¥980) that I mentioned earlier. It also comes with self-service coffee for after your meal. For toppings you can choose whatever you like. Since I was there and didn’t want to get lost on what to pick, I went for all the toppings (¥300). 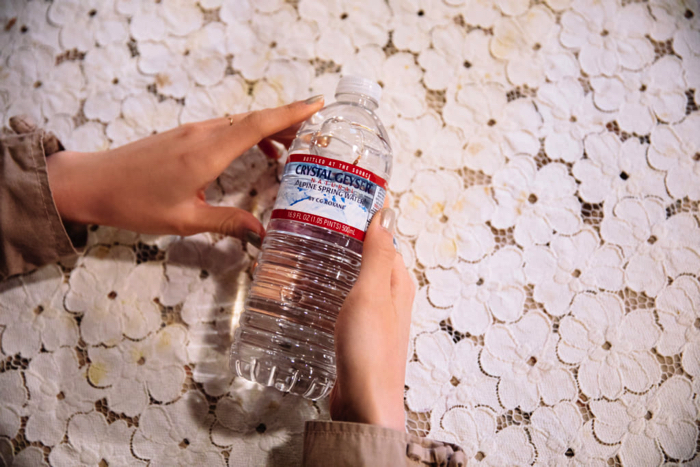 The water I ordered comes in a plastic bottle. The tables have antique displays. Everything on them was wonderful. 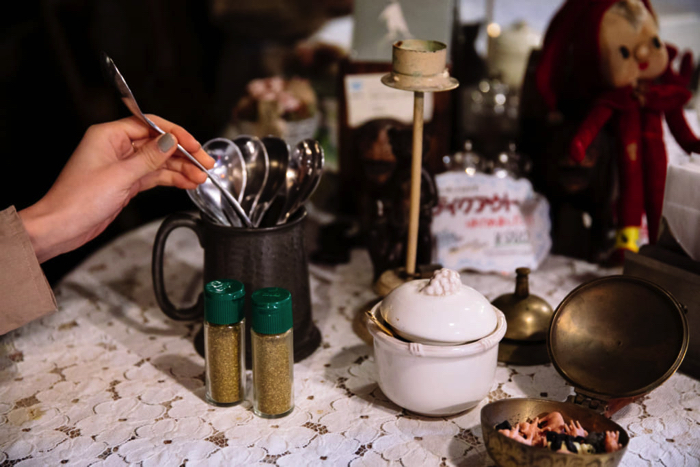 The air was clad in that rich, familiar scent of curry, a special one that I would never get to eat had I not come here. 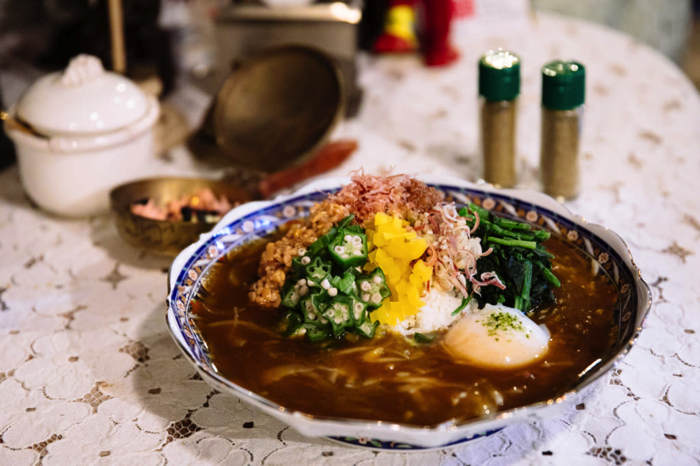 The instant I hold the curry in my mouth the delicious flavour of the dashi sparks in my mouth like fireworks. The broth has a slight thickness to it and a strong, deep flavour that fades into a soft aftertaste on the tip of your tongue. It’s not at all spicy, and the goodness of the dashi is luxurious like being escorted by a gentleman. And I can’t forget the smell. 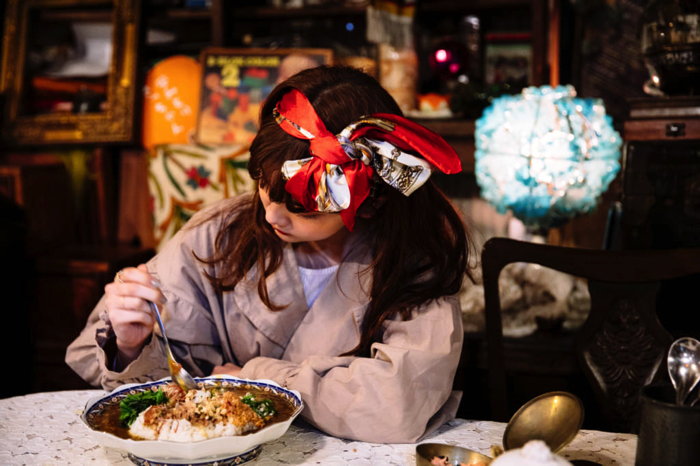 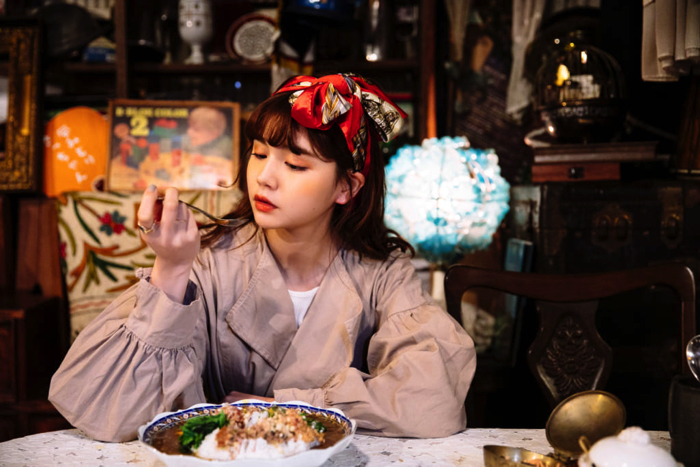 My taste buds throb at this new sensation.

Like its name suggests, this is a dish where the Japanese dashi stands out above the ingredient crowd. The restaurant owner has gathered much experience in the kitchen from traditional Japanese cuisine to sushi, ramen, yakiniku, izakaya style and so on. He encountered this place by chance, and with one look he said to himself, “I want to try doing curry.” The Wadashi Soboro Curry came about through his gained culinary experience combined with the aesthetics of the café.

To bring out the full flavour of the dashi so it isn’t drowned out by the curry spices, the owner uses two types of skipjack tuna, kombu, dark sleeper, and dried sea slug, as well as a type of soy sauce called Kaeshi. 15 more ingredients are blended together to create the spices, creating deep and delicate flavours. 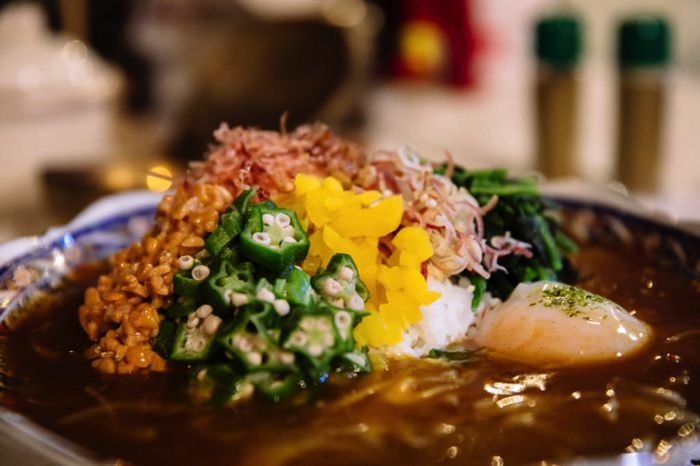 Now it’s time for a session with the mountain of ingredients I greedily asked for. It’s enshrined with classics like meat soboro, beefsteak, agedama, bonito flakes, and dried plum in addition to pickled daikon radish, crushed natto, Japanese ginger, and okra. The spinach and onsen tamago egg sit at the foot of the mountain and create a new culinary sight. 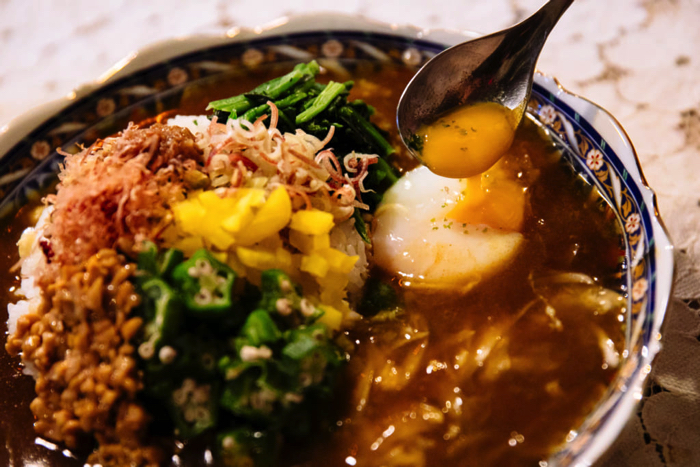 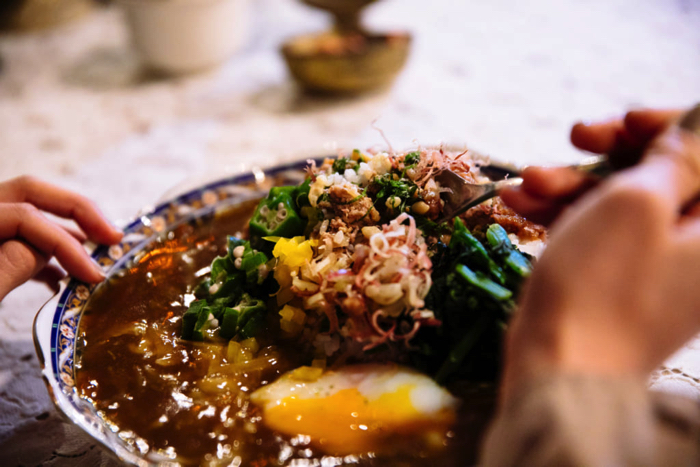 The base of the dashi is mobilized with a force of Japanese ingredients with a smell and flavour and that comes together harmoniously in your mouth. I’m spellbound by the flavours that stand out coupled with the pleasant textures of the agedama, daikon and ginger.

Hey, I must have hit every ingredient in there. All correct.

I added a sprinkle of pepper that was on the table and create yet another refreshing aromatic veil. 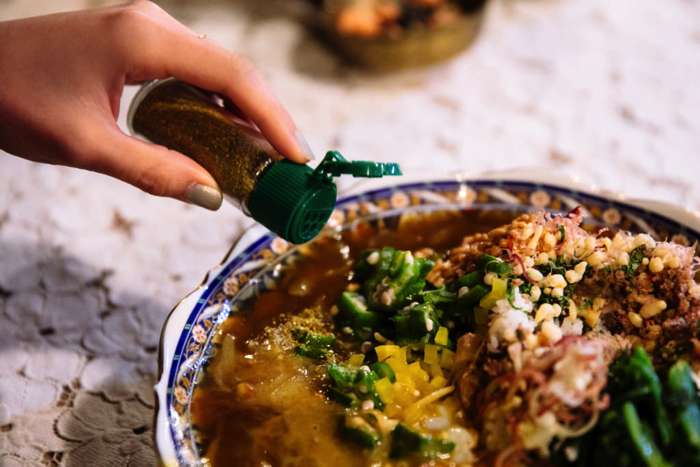 The compatibility of the pepper with the dish works so well precisely because it uses a Japanese dashi. Wadashi, or Japanese broth, is a staple of Japanese cuisine. The curry and Japanese soul carved into this dish resonates with me. It’s my first time eating it, yet I’m still filled with a sort of nostalgia―a warm embrace. 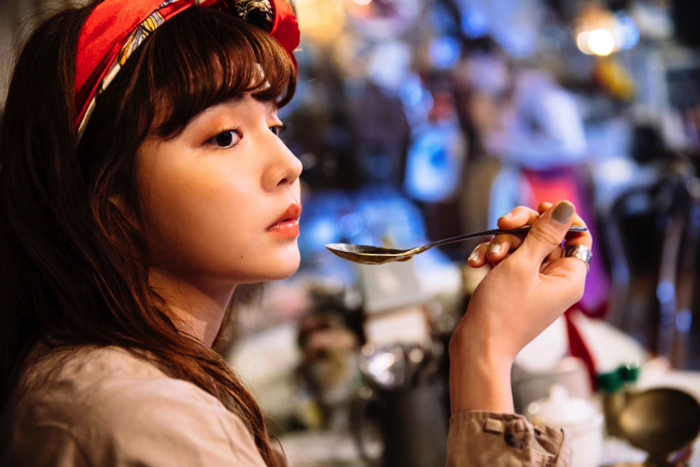 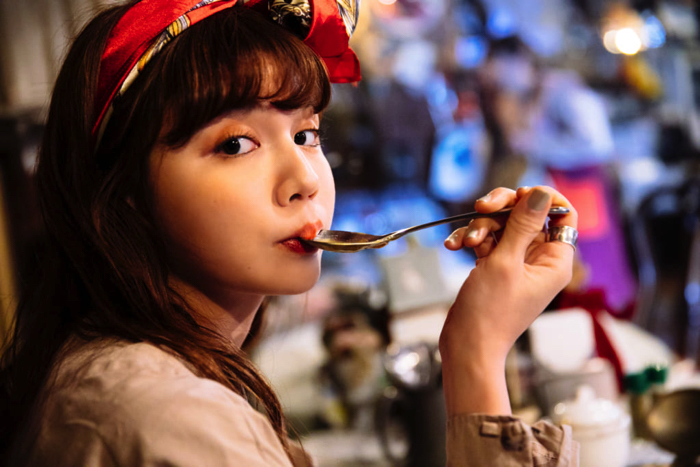 I also understand why when the shop opens, the customers in the café stand up and change with the next line of customers. The owner has a wonderful sensitivity, and has worked out a way to put his own matchless warmth into each and every bowl. I caught sight of his gentle smile as he was cooking in the kitchen. It left an impression on me. 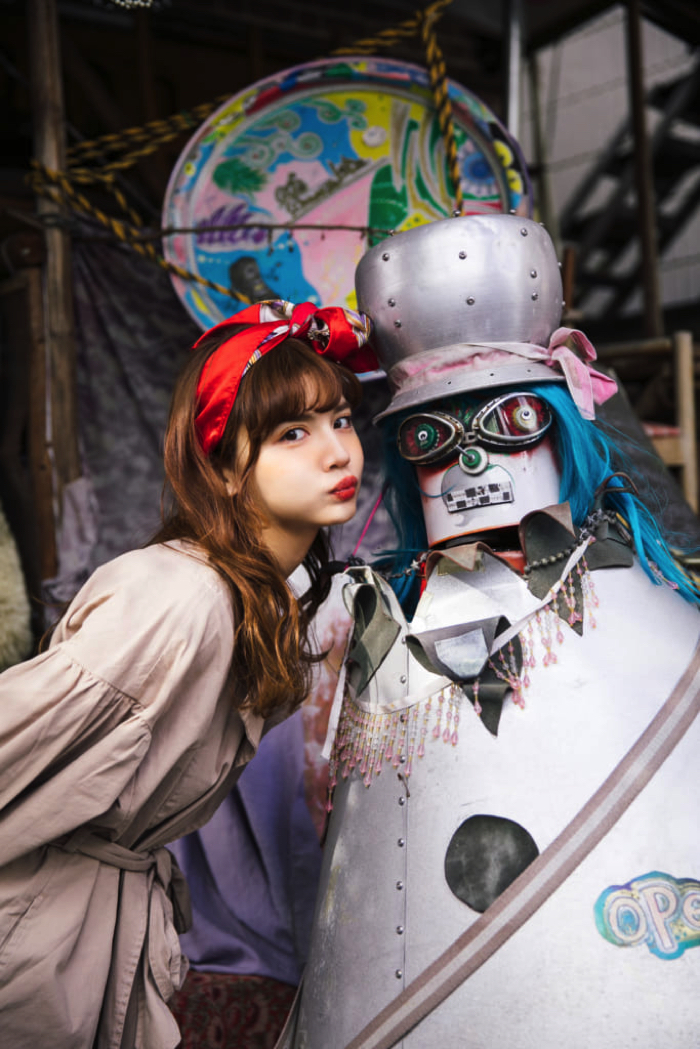 What a delicious curry to enjoy in such a wonderful place. All five of my senses have reached peak happiness. I grab my post-meal coffee and head onto the streets of Kōenji. 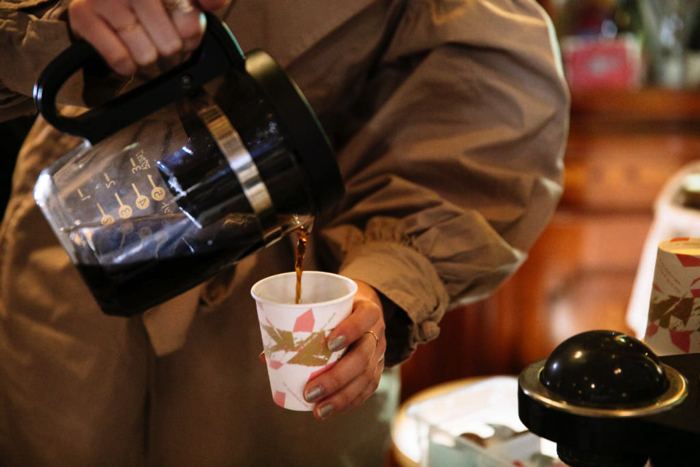 What a wonderful weekday afternoon.