A Date With Yutaro: Soaking Up the Japanese Summer Sun & Visiting the Art Aquarium | Tokyo Stroll 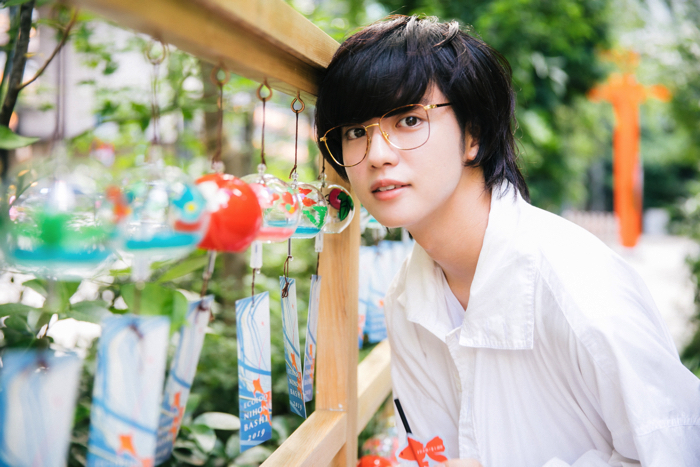 It’s been a while since our last date with Yutaro. He’s been very busy with film shoots. He had some spare time today so we paid a visit to Nihonbashi for our next date. “ECO EDO Nihonbashi: Enjoy Cool Edo With All Five Senses” is an event held every year in the Nihonbashi area which takes the Edo period cultural idea of “coolness”―an in, to enjoy being cool during the summer－and puts a modern spin on it. There are many exciting things to look forward to, including the art aquarium which proves massively popular every year.

We gave ourselves more time to arrive at the meeting place to be in the safe side, but it seems Yutaro-kun was already there waiting for us! 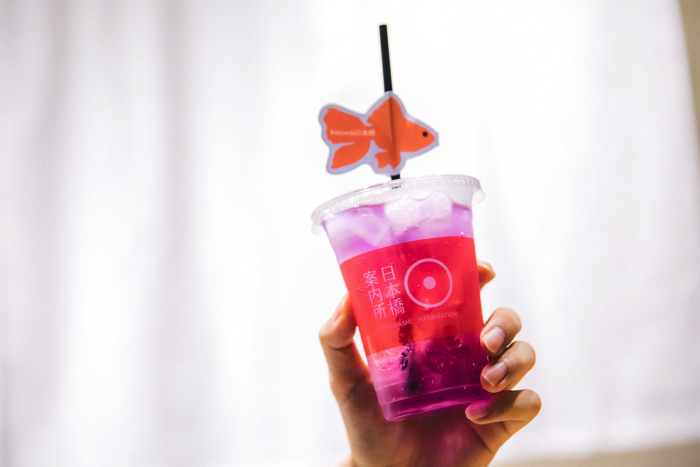 “Here, you must be boiling.” Yutaro-kun kindly offers a cup of IPPIN CAFE’s limited-edition sparkling herb tea. It’s a delicious mix of fizzy soda and lemon, a perfect refreshment for the summer. Since he ordered takeout the drink came with a goldfish straw. Goldfish are a staple sight during Japanese summer festivals so it’s very fitting for the occasion!

With our drinks in hand, it’s time to head to Nihonbashi for our Edo summer date! 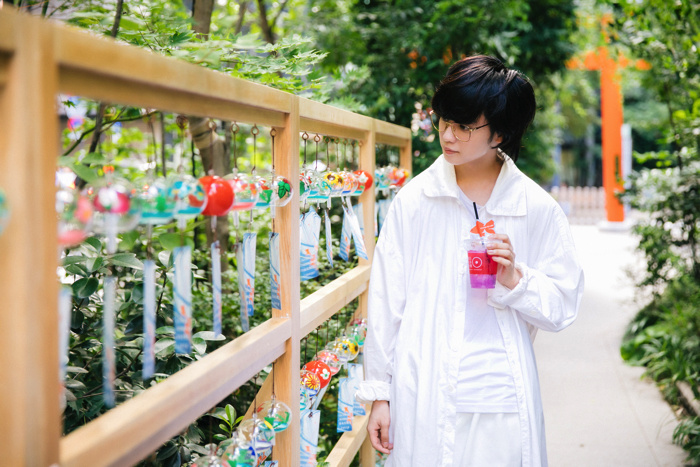 Lining the path between Fukutoku Shrine and Fukutoku Garden is the Wind-Chime Forest Path where around 200 Edo-style wind chimes dangled. This year, during the evenings, the path is illuminated with beautiful lighting. 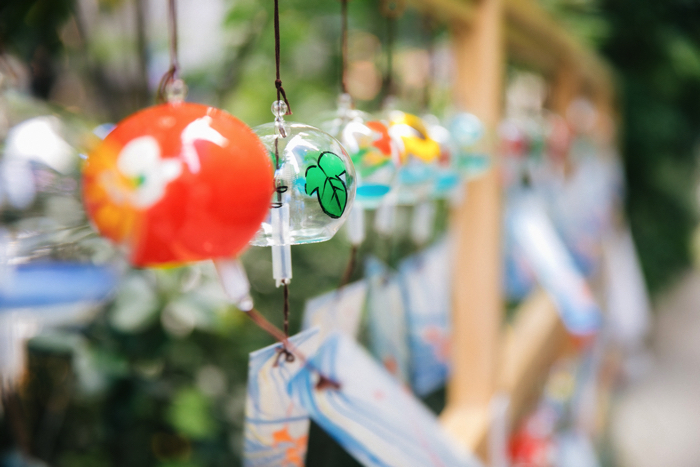 When the breeze rolls past the wind chimes ring one by one－a cool and refreshing sound. 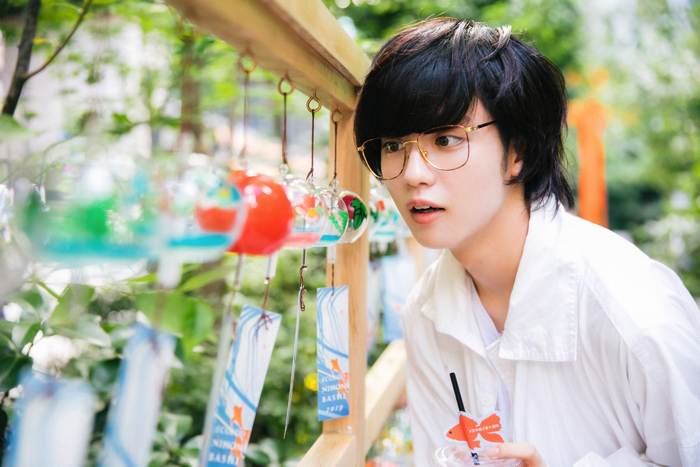 “I hear each one of these Edo wind chimes are individually handmade by craftsmen.”

When you hear the sound of the wind chimes it makes you feel cool like a gentle breeze of the wind.

After strolling along the Wind-Chime Forest Path we make our way towards this year’s ECO EDO Art Aquarium event. 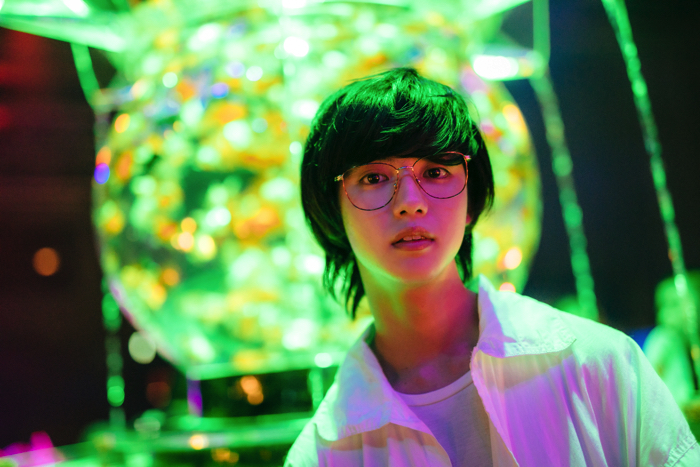 The moment we step instead Yutaro is already dazzled by all the goldfish: “Wow! I knew about this place from what I’d seen online, but this my first time here! This art aquarium really is something!”

The full title of the event is “ECO EDO Nihonbashi ART AQUARIUM 2019 ~Edo, Coolness of Kingyo~ & Night Aquarium.”  Goldfish were a huge part of the common culture in Nihonbashi during the Edo period. This event recreates that and brings that “coolness” aspect while combining it with contemporary art by having people observe the fish in lots of different artistic environments. 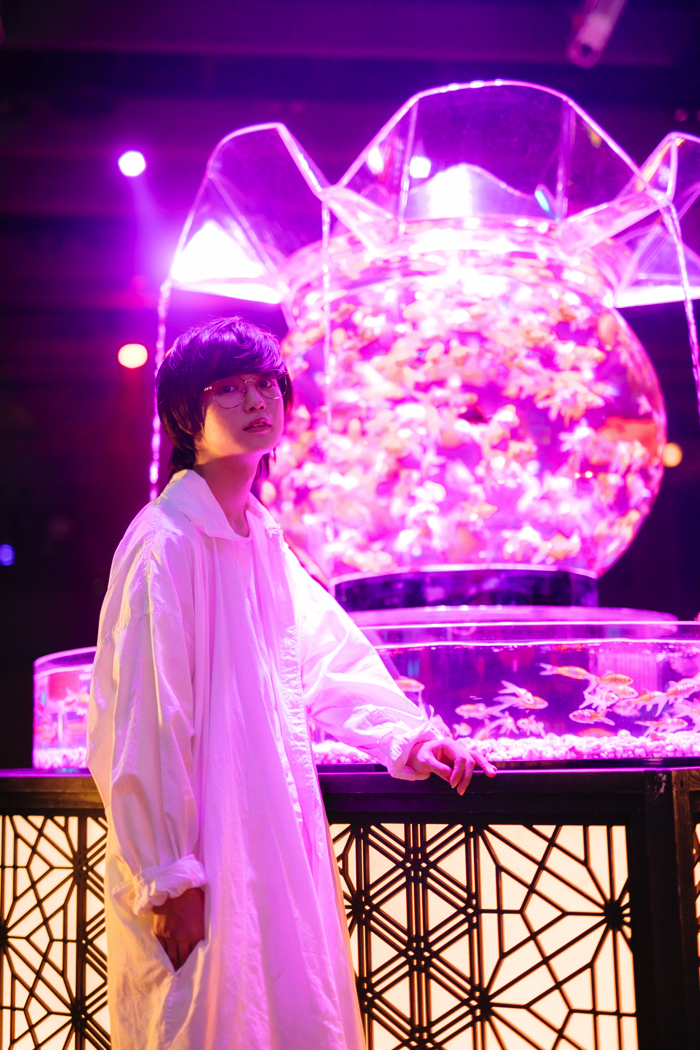 “This is the biggest fish tank, apparently it has 3,000 fish swimming inside!” 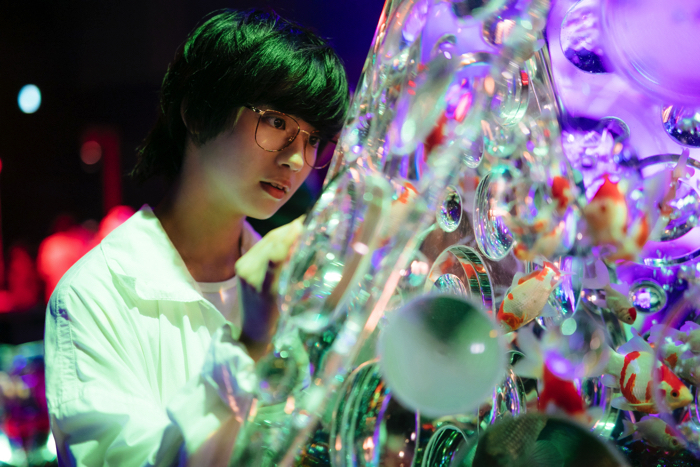 “Seeing the light reflect on the water from the illuminations lets you see the fish in a different light, doesn’t it?” 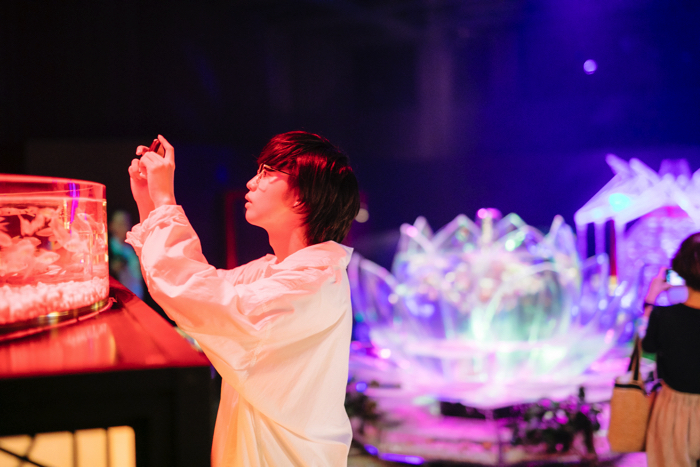 Looks like Yutaro-kun is having a lot of fun taking photos. 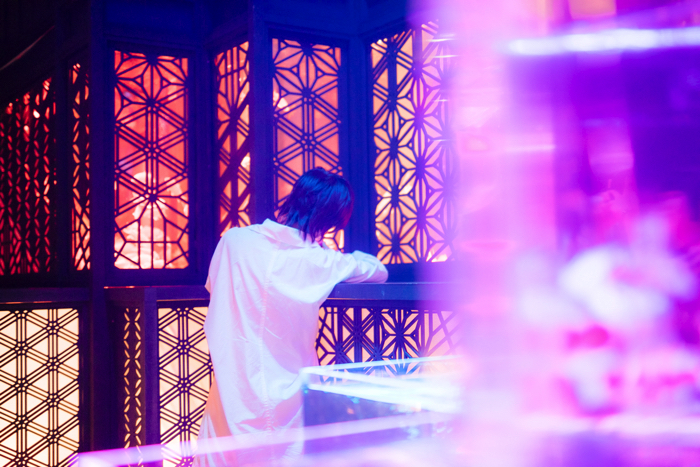 He’s equally interested in just about every fish tank! 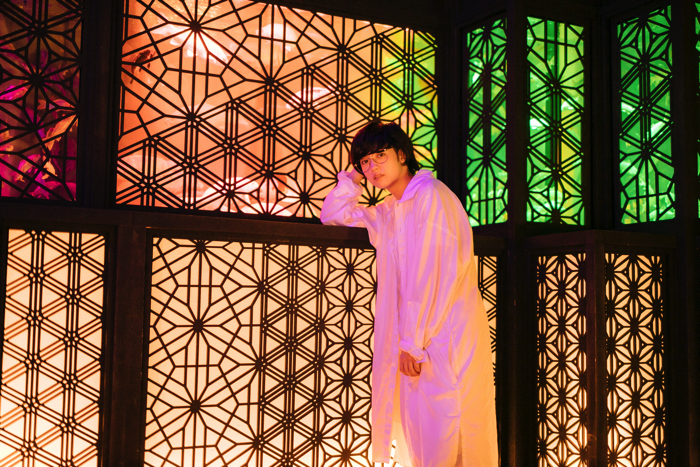 These other fish tanks have a different aesthetic to them. Their Japanese-style designs make for great photos. 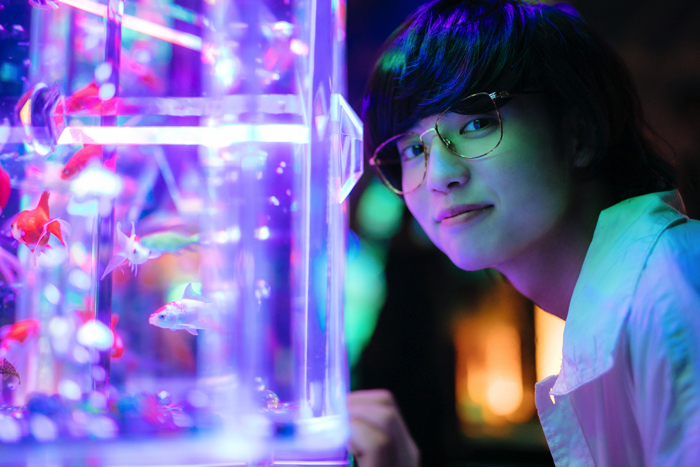 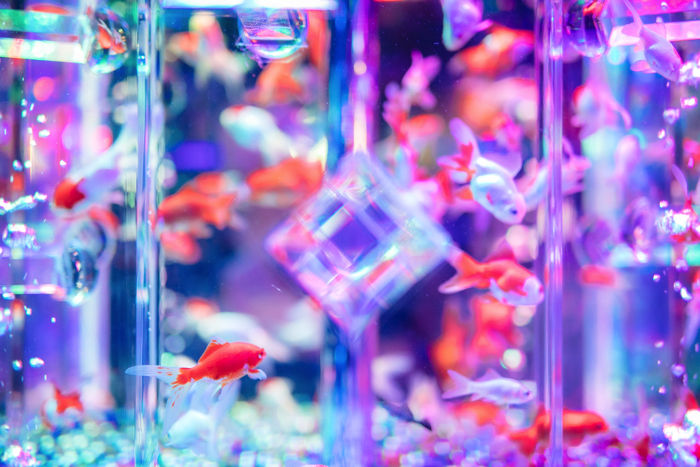 It really does look like one. When you take a peek instead you can glimpse all kinds of colourful fish gently swimming around. 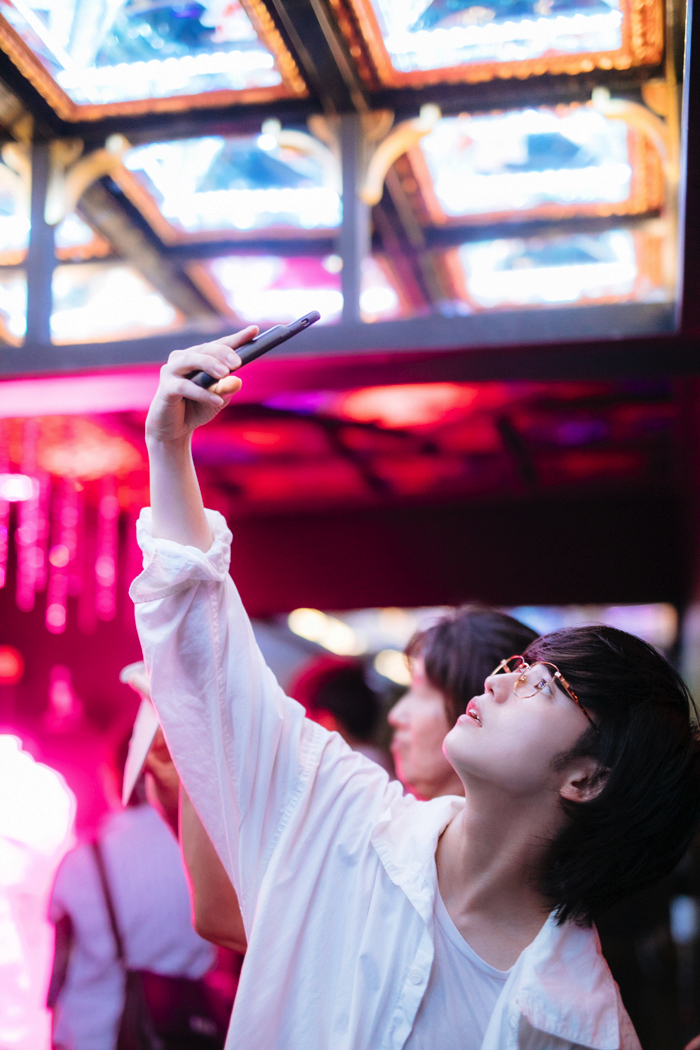 “There’re goldfish swimming on the ceiling too. So cool! This aquarium is incredible. It brings together the great culture of Edo and contemporary art.”

The Art Aquarium bustles every single year with visitors, but this year will mark its last run. It’s being held at Nihonbashi Mitsui Hall, so if you have the chance to go then please do. 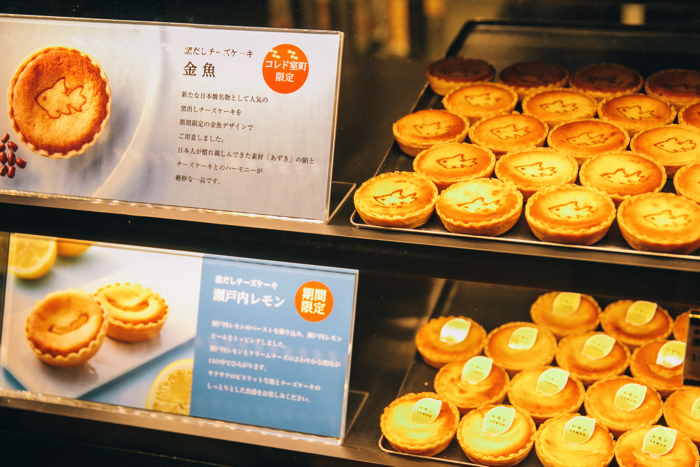 We of course checked out some local Nihonbashi treats too! We stopped by morozoff for some cheesecake after the aquarium. 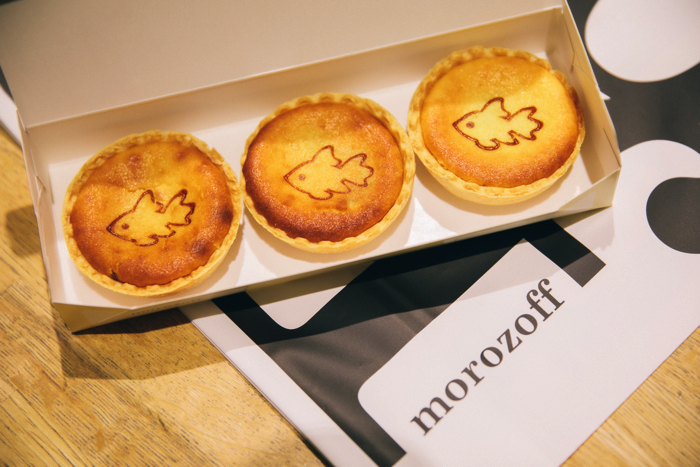 These cute cheesecakes with their goldfish designs are available for a limited time only. They’re filled with sweet red bean paste. They perfect with iced tea. 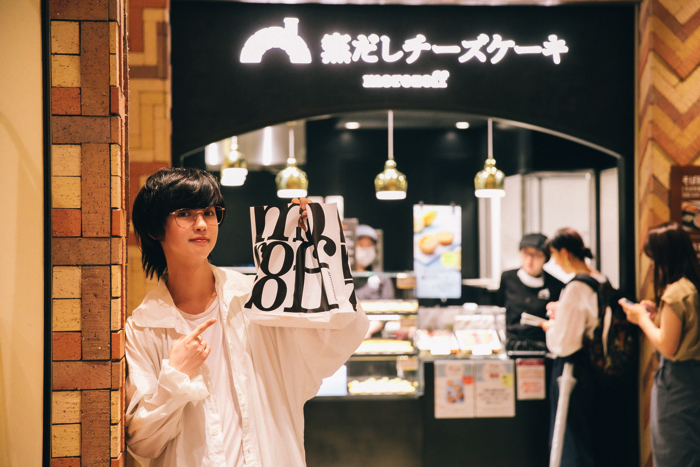 “Got some! Let’s eat them while we head back.” 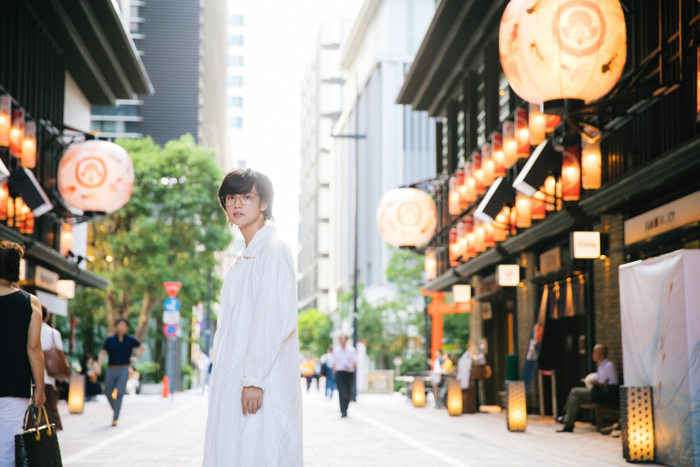 Our first date in Nihonbashi was so much fun. While on the date Yutaro-kun spoke about the new live-action film he’s in, Kaguya-sama: Love Is War.

“It’s a romance film with mind games to try and make the other person confess their love. I play the character Tsubasa. His number one highlight scene is the kabedon scene. That was my first day shooting, so I was super nervous, but I got along well with the other actors, and the atmosphere on set was harmonious, so I was able to relax for the shoots. Tsubasa is a genuine guy who will believe things that have been said to him in earnest. You’ve definitely gotta check out all his scenes throughout the film!”

“A lot of the cast are the same age as me, so we were all energetic together in the waiting room. There’s a scene at the end where all the cast get together. It took 3 days to shoot so we ended up getting along really well.”

“This film has made me realise that love comes in many shapes, and that mind games happen in a variety of ways between guys and girls. There’s cute scenes that express that small bit of pride that teenagers have, the embarassment they feel, when they get butterflies, scenes that will warm your heart. The film has various elements to it so I thoroughly enjoyed watching it myself. I hope that couples in love in their teens and twenties watch it, and I also hope that married couples watch it and crack up laughing too.”

“In the film it’s summer break, and they go and see fireworks and stuff. It’s definitely one to watch durnig the summer. You’re gonna come watch it too, right? Shall we go?”

An offer we cannot refuse! We’ll definitely go and see it with you, Yutaro-kun!

Yutaro was born in Hiroshima on June 3rd 1998. His modeling career has earned him lots of attention as a fashion icon of the new generation. The famous model also works as a “charisma” shop assistant. Yutaro has gained his reputation as a “mysterious and handsome guy” from his appearance on Japanese variety shows. His debut was made on the show “Gyoretsu no Dekiru Horitsu Sodanjo” and has since then appeared on numerous different TV shows. He challenged himself to appear on stage for the very first time in March this year and is gaining popularity by the day for his diverse work.