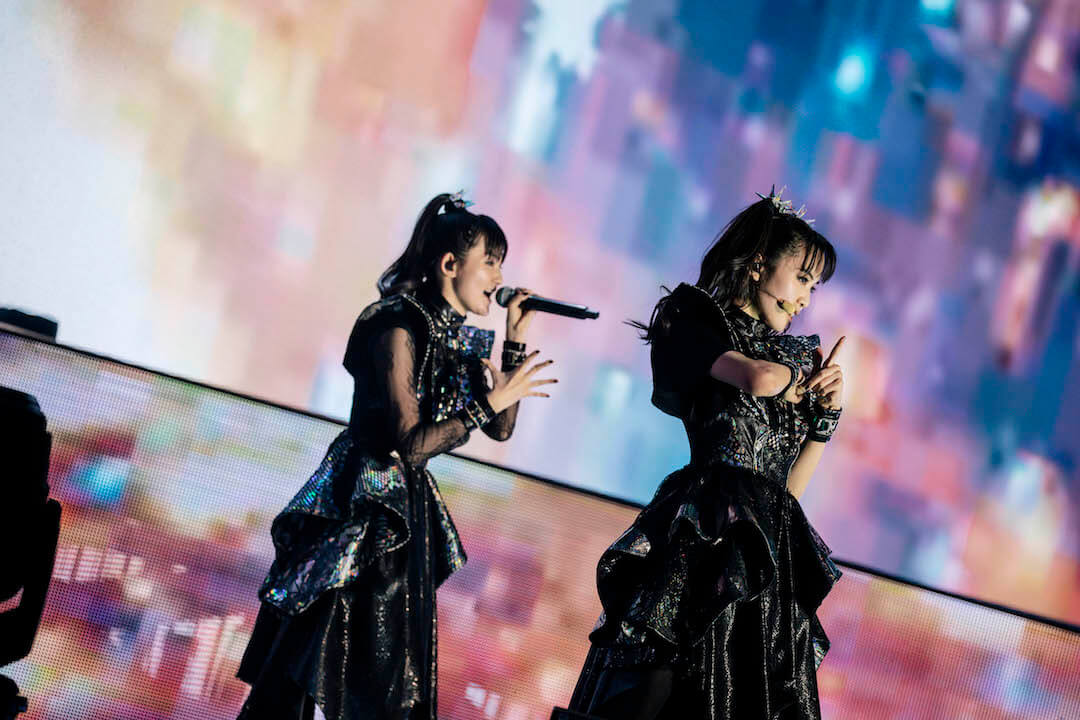 BABYMETAL’s first solo performance of 2020 took place over the weekend on January 25 and 26 at Makuhari Messe International Exhibition Hall in Tokyo. The two concerts were added as extra shows to the Japanese leg of their ongoing “METAL GALAXY WORLD TOUR.” They performed for close to 50,000 fans across the two nights, which were filled with anticipation and excitement, and were a display to Japanese fans of the band’s honed performance skills as a result of playing around the world.

BABYMETAL released their third studio album METAL GALAXY worldwide simultaneously on October 11, 2019 which they promoted with a US tour, their biggest to date with 20 concerts, which included a performance at The Forum in Los Angeles, USーtheir first arena show in America. They followed the promotion up in November last year with a Japanese leg to the tour, with the Makuhari Messe gigs which took place over the weekend being additions to that leg. Both days sold out all tickets.

Today, we take a look at those two shows, which precede the upcoming European leg of their tour. BABYMETAL threw out the idea of a generic set list with these concerts, instead option for performing both discs from METAL GALAXY, one for each night respectively. 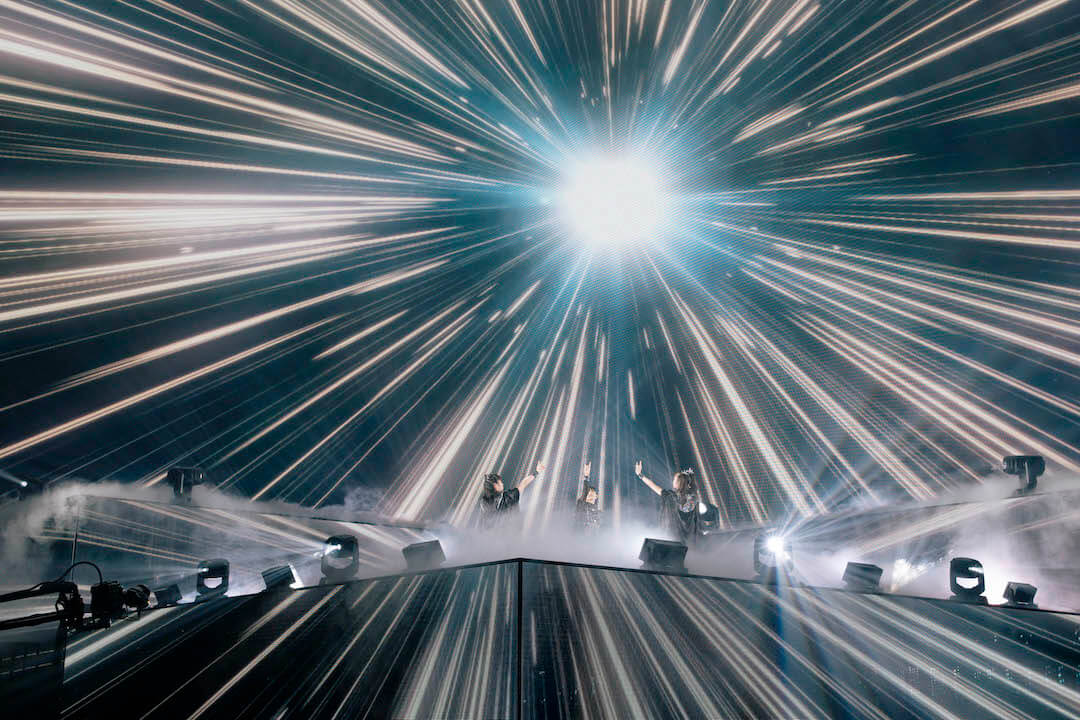 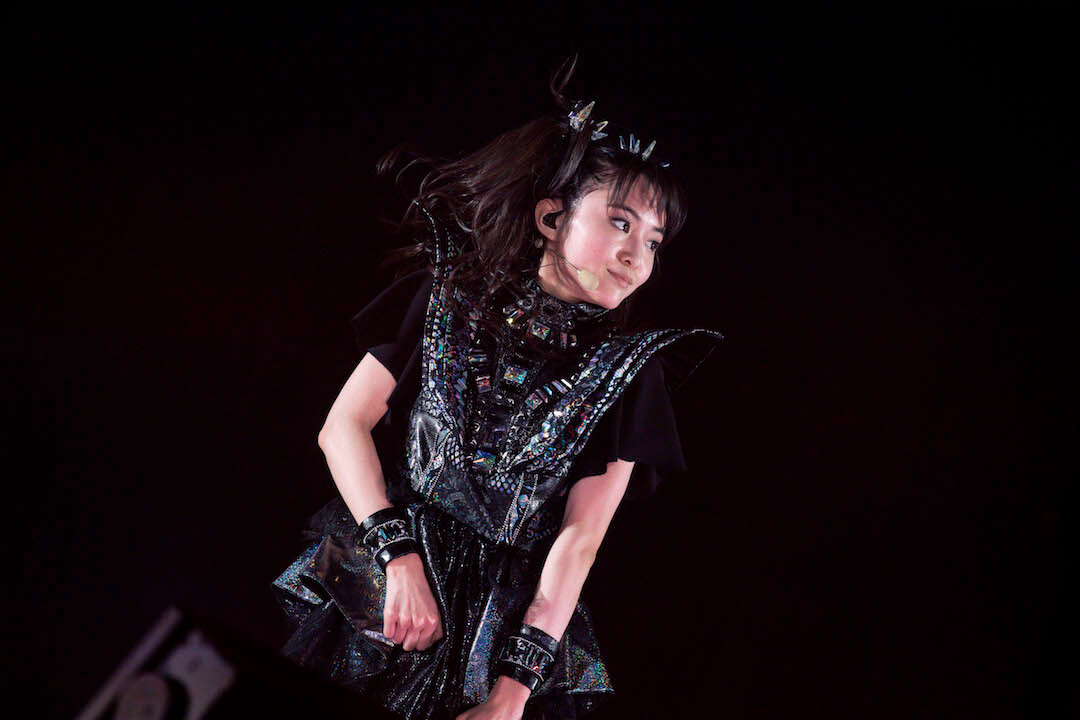 On the first night, Saturday January 25, the theme of the concert was “Power of Light.” BABYMETAL’s set focused on the songs on the first disc of METAL GALAXY. The performance began with the album’s opening track, FUTURE METAL, which at the same time as it begin, the giant LED screens materialised visuals of a metal galaxy, pulling fans space-bound into the galactic world of BABYMETAL.

This was followed by DA DA DANCE (feat. Tak Matsumoto) which saw the members finally step onto stage where they were met with a surge of applause and cheers from fans. They continued with hit tracks Elevator and Shanti Shanti Shanti. And for the first time ever, they performed Oh! MAJINAI (feat. Joakim Brodén) live, during which Sabaton vocalist Joakim Brodén appeared on the LED screens. This was a video made in collaboration with the Sabaton frontman, and served to send the crowd into even greater excitement. 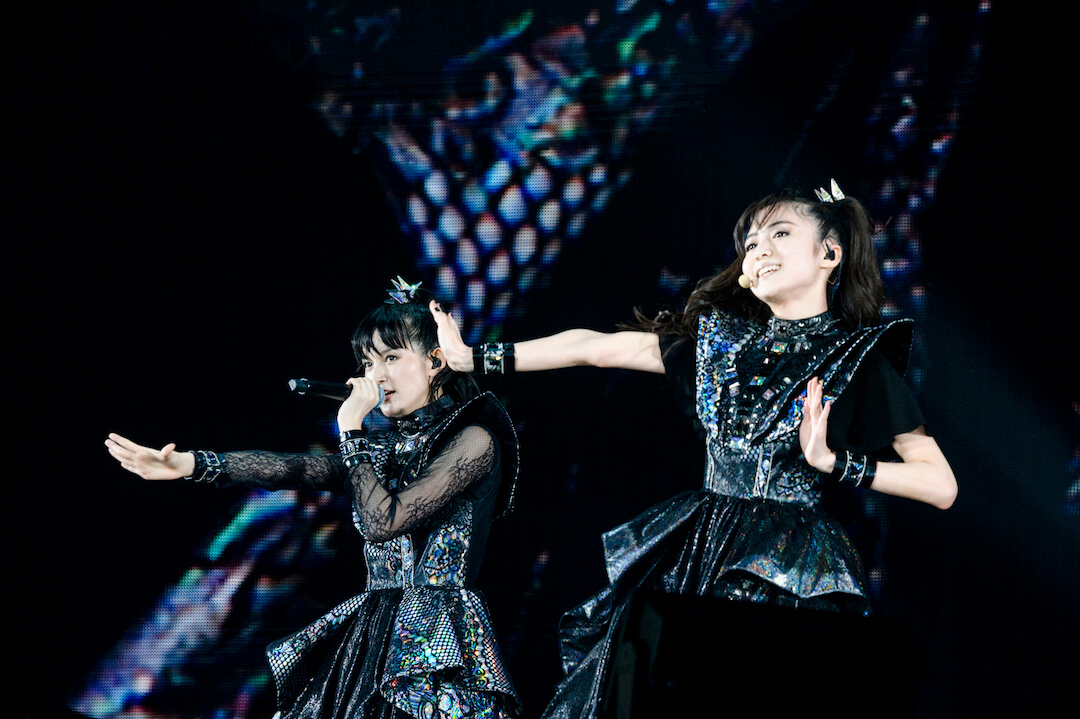 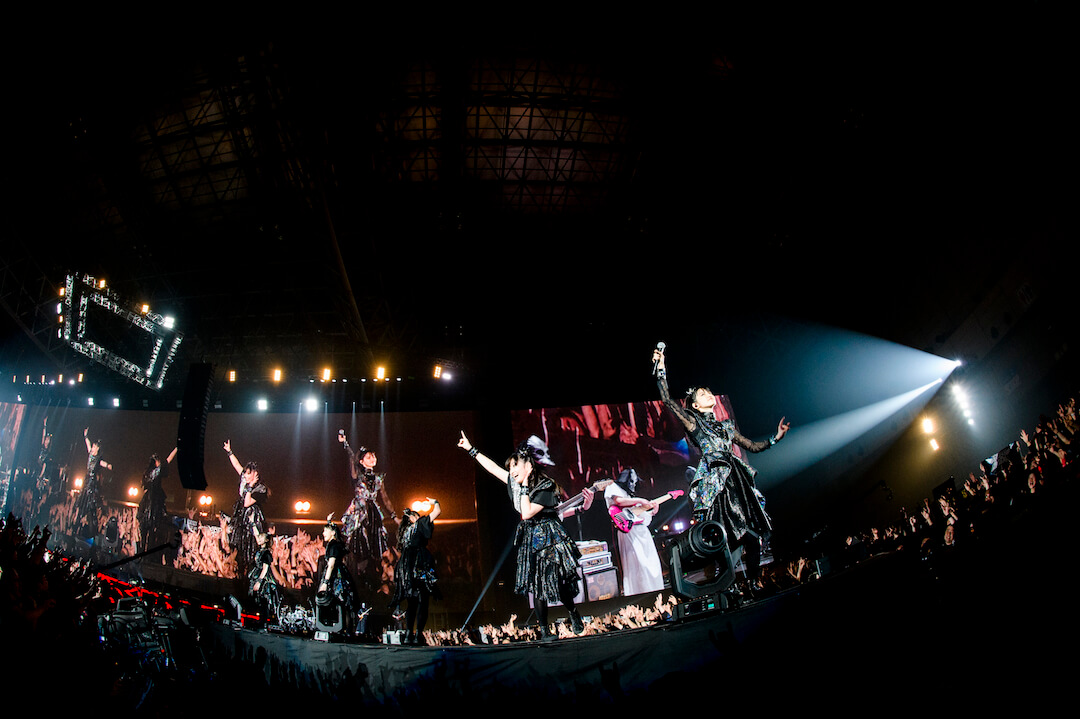 Other songs played live for the first time included Brand New Day (feat. Tim Henson and Scott LePage), during which the members’ silhouettes reflected onto screens as they danced, captivating the crowd, as well as Night Night Burn! which featured flamenco and samba-inspired choreography.

As the gig sped towards its climactic conclusion, BABYMETAL performed the epic track THE ONE, which as the name of the song suggests had the band and the fans come together as one. A lore-packed video was shown during the performance which featured the Avengersーthe dancers who tour with BABYMETALーcoupled with the Kami Band and their thrilling sound. This saw the excitement in the room went from a kindled flame to an outright blaze, and subsequently a fiery eruption when they played Road of Resistance. 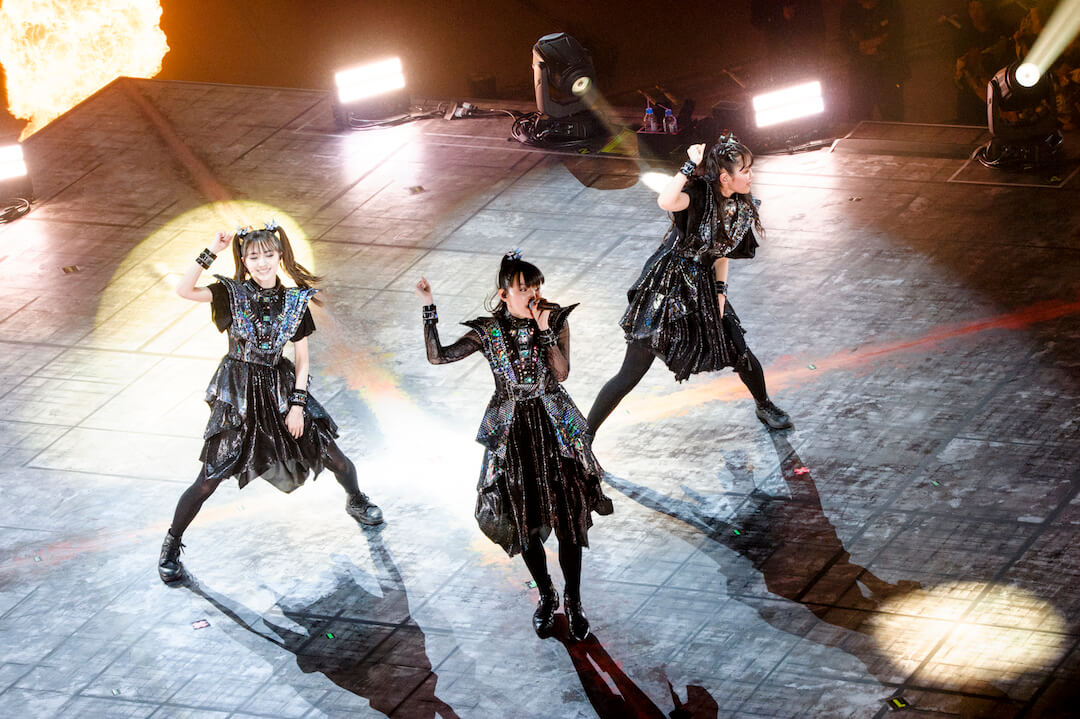 For night two, on January 26, the theme was “Power of Darkness,” which saw BABYMETAL perform 12 songs form the second disc of METAL GALAXY. Day one was supported by the “Eastern Kami Band,” but for the second day, fans were greeted by the heavy sound of the “Western Kami Band.” BABYMETAL and the Avengers came onto the stage across the flower-decorated floor, beginning the night with IN THE NAME OF. 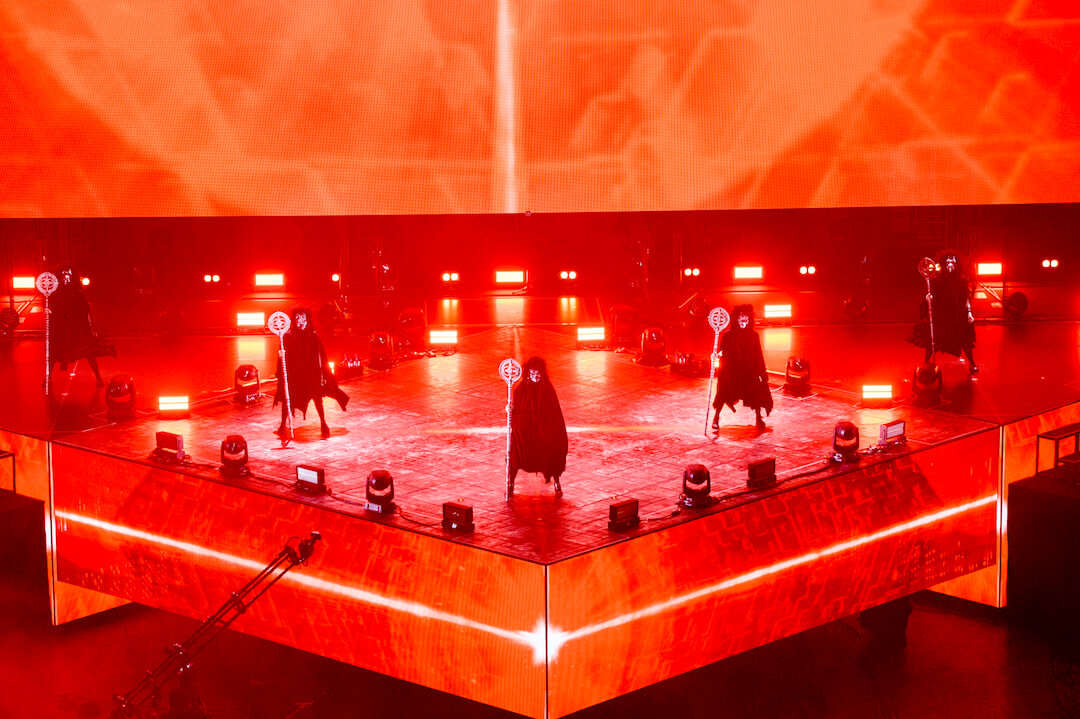 During Distortion (feat. Alissa White-Gluz), the LED screen was dyed a bright-red yellow, and SU-METAL, saying nothing, gazed out into the crowd with a fierce gaze. It was an immersive experience like being in a movie.

PA PA YA!! (feat. F.HERO) followed, which incorporated the use of a moving stage, sending the band towards the audience as fans swung their towels overhead. The Kami Band slowed things down with the flowing, chill groove of Kagerou, after which BABYMETAL performed BxMxC live for the first time which featured rapping parts, combining to create a metal-rap amalgamation.

After playing Syncopation and Headbangeeeeerrrrr!!!!!, BABYMETAL sent the crowd into quiet captivation with Starlight and some enchanting stage lights, as well as the beautiful Shine. Arkadia marked the move towards the final act of the show, just as the song serves as the final track of METAL GALAXY. 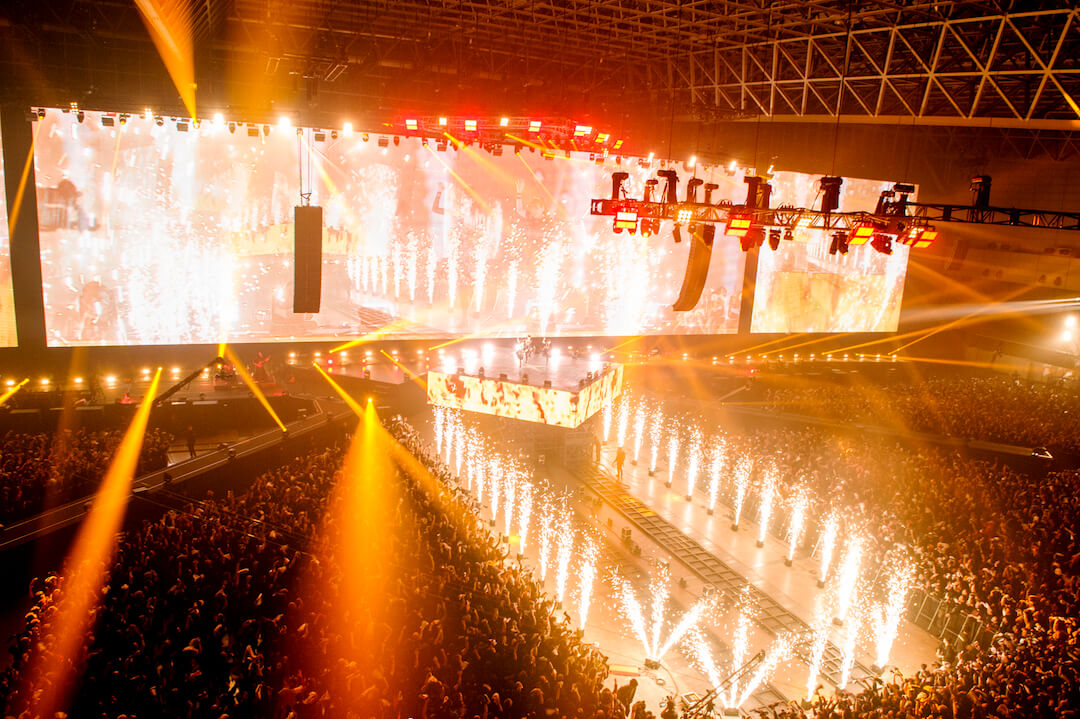 Some time was set aside to show the same story video as in day one featuring the three Avengers and the two Kami Bands. It was then that the intro to Ijime, Dame, Zettai rang in, and the crowd split into wall of death formation. Moa-metal and the Adventures performed their iconic dash, and then all five of them, with Su-metal included, took to the centre stage to jump together with the fans. Thus concluded the two light and dark-themed concerts performed over the course of two days, and the fans’ journey into the Metal Galaxy.

2020 marks the 10th anniversary since the band formed. Be sure to catch them on the road in a city near you as the European leg of the METAL GALAXY WORLD TOUR begins in early February. Check the dates below.