BAND-MAID their first “one-man” tour begins! They are going to release a new single on the 19th of July. 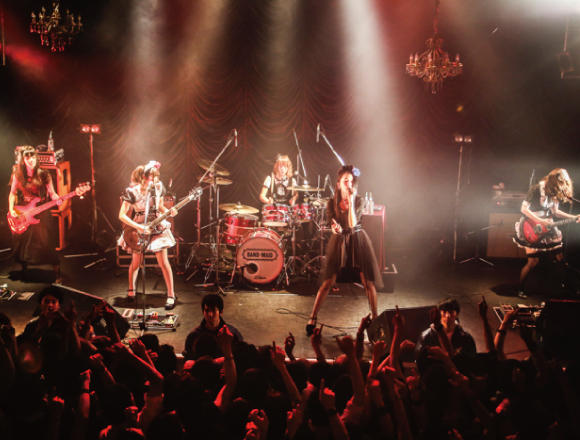 BAND-MADE held their first concert of their “one-man” tour titled,“Hatu One-man Okyuji Tour 2017” which will take them to six places throughout Japan (8 concerts) on the 10th of May at Tokyo Kinema Club. Ticket were sold out and many masters and princesses (they call their fans masters/princesses and they call their live concert “servings”) gathered at the venue. As the sound effects resonated throughout the room, a chandelier appeared and the maids appeared on the stage which looked like a European-style house. All the “masters and princesses” went wild and the venue was filled with an air of excitement. They first performed their hit tune “Don’t you tell ME” before performing their most popular song “REAL EXISTENCE,” “Unfair Game,” which displayed the band’s performance skills, and “Take me higher!!” During the “serving,” since the 10th of May is “the day of the maid,” Saiki (Vo) and KANAMI (Gt) performed the acoustic version of “Awkward” and “YOLO.” The sexy voice of Saiki and warm sounds of KANAMI’s guitar filled the venue and the masters and princesses were sucked into the maids’ new world. After the acoustic part was finished, Kobato Miku, MISA (Ba) and AKANE (Dr) appeared on the stage and introduced the goods of the band and announced that they are going to release their major second single “Daydreaming / Choose me.” The first-run limited edition comes with a video of serving. The masters and princesses were filled with exciting when they heard that a second single is going to be released. At the end of the serving, they performed “Thrill” and “Don’t let me down” which were the songs that made them famous and masters and princesses were filled with excitement, diving and moshing. As the last song of the concert, they performed their standard number called “secret My lips” and finished their first “one-man” tour concert. Tickets for most of the venues are already sold out, so you had better get tickets as soon as possible. They are also planning to perform in rock festivals such as SUMMER SONIC 2017 while touring throughout Japan this summer. Please check out the great success of the “maids.”