【Tokyo Dinner】You won’t believe that the chef of “Negura” in Koenji has never been to India! 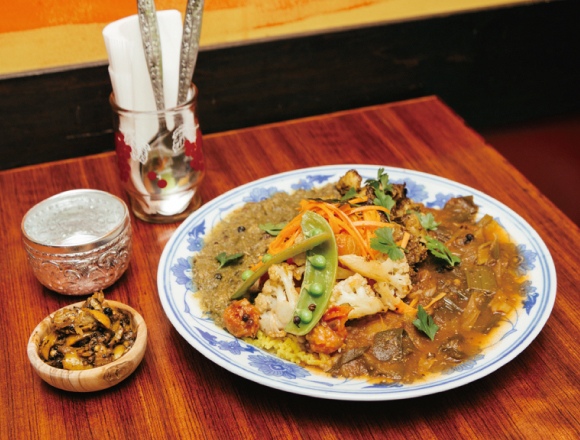 Spring, summer, autumn and winter, for breakfast, lunch and dinner – I want to eat curry all the time! This is the sequel to curry lover Rink Murata’s mission to visit all the best curry restaurants in the city. All restaurants in the sequel have been approved not just by Rinko-chan, but also by many other customers! All Rinko-chan has with her is her purse, a camera and an undying love for curry! If you go to Koenji once, you will immediately want to go again. When you go out to drink in Koenji, it has recently become a common trend to hit up “Negura” while you’re out there. “Have you been there before? Let’s go!” say the many fans of these crazy curries, however, this isn’t really a place big on alcohol. We were contacted by Rinko, who said she found a new, exciting place to continue her curry quest. This place features Indian curry with a wild concept! Just a two-minute walk from Koenji station by foot and you will reach the Etoile shopping centre. With a name like that anybody would be curious. This is where Negura is located. The chef of Negura has never been to India, but the concept of the restaurant is their wild ideas used to make curry. Just the sound of it is a fun concept but it is not so much the concept that gave the restaurant its name, but the destination. The official restaurant name “Negura” (meaning roost) originates from the pet name that the two managers referred to this location as during their old school days, as this was their meeting point. Whilst eagerly opening the door to the restaurant, Rinko’s heart was throbbing! The interior is decorated with lots of small objects and books crammed together. One wall also features a colourful and dynamic painting. The art direction was managed by Shoshi Nigamushi, an artist who has contributed to the designs of rock festivals and many other events.

Ower Osawa-san explained that they have never been to India, which came to a big shock because one taste of the food and you would have thought differently. (It’s a real shame we don’t have Osaawa’s photo – a very kind and gentle person!)

“The restaurant atmosphere is very Indian, and despite not mentioning anything of the sort, it is easy to believe that Osawa-san has done training in India” said the cute Kondo-san while laughing. The menu uses ingredients of the season and likewise bases the meal around a wild concept for the daily special. Today’s menu featured onion and tomato, rape blossoms and manila clams. (￥1,000) The topping was kumquat and pepper chutney (￥200) Rinko also ordered Shibireru chai! (￥500) The whole plate was fully satisfying! Two varieties of curry, and a colourful range of vegetables such as tomato, garden peas and carrots – what a luxurious mix! Where to start? A meal with impact accompanied with a spicy chai – surely you cannot taste anything as extravagant as this anywhere else. “This is delicious!” said Rinko chan, as she continued through her meal. Describing the flavour as “gentle”, her spoon quickly cleaned the plate. The spices and the ingredients worked perfectly together. On the whole, the meal was not too spicy, allowing the true flavours of the ingredients to be fully enjoyed. The aftertaste of the spices, however, packed a decent punch. Not only was the taste exceptional, but the balance was a whole new experience! The true wild concept could be tasted in the meal. Combining the taste of India with mankind’s strongest point of imagination, the wild concept for this restaurant was born. The atmosphere of the restaurant was youthful – from its name to its interior. You could feel the wonderful, warm personality from the two staff members. There is more than just that, however. By means of imagination and freedom, a challenging concept was born. And this flavour is what brings many people happiness. A restaurant where memories are made, two people embarked on a challenge, creating a wild kingdom of Curry. Koenji is already known as “the India of Japan”, and this Curry kingdom emphasises this even more.

Come try a curry at Negura, which offers a unique atmosphere, moreish meals and the unique feeling that you are in India!