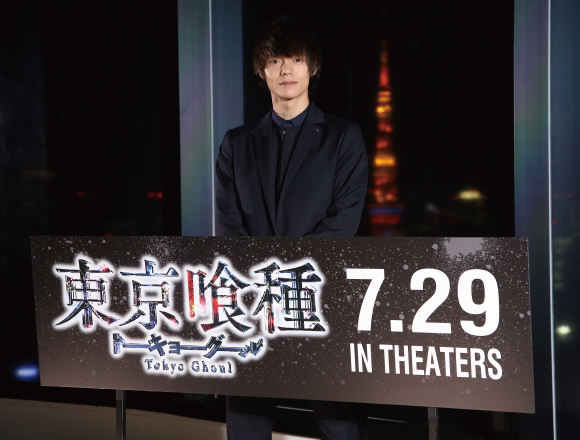 Tokyo Ghoul has proven to be a global phenomenon, popular not just in Japan but across the world, with the manga series having sold over 30 million copies worldwide. A long-awaited movie adaptation has been announced and is finally on the way. It will make its way to cinemas on July 29th. A special kick-off event was held for the release amongst the hype on June 2nd at YouTube Space Tokyo. Guests at the event included Masataka Kubota, who plays the lead role of Kaneki in the movie, Kentaro Hagiwara who directed it, and the original author of Tokyo Ghoul, Sui Ishida. They gave some big announcements surrounding the film. They also held a Q&A session and showcased a special screening. The event itself was broadcast live on YouTube worldwide for everyone to see and gained huge attention.

YouTube Space Tokyo is located at Roppongi in the heart of Tokyo where you get a fantastic view of Tokyo Tower, the perfect location for a Tokyo Ghoul event. The event began with a Q&A session with the guests. The producer of the film, Mr. Nagae , is a huge fan of the original manga series, and revealed the sequence of events that led to him becoming the producer of the movie, something which he had really wanted to do. Director Hagiwara long knew the series before receiving the opportunity to direct the movie. He had been captivated by the manga after reading it, and revealed how much he had wanted to work on a movie adaptation. He told the audience that he had gone back and forth on lots of ideas and presented plans for a movie before being chosen as the official director. The manga’s author, Sui Ishida, mentioned how eager he was for Masataka Kubota to be cast as the main character, Kaneki. “When I first met Kubota, I felt that he would be a great pick if the series ever became a movie. For me, I think that’s a strong reason behind why it became a movie,” said Ishida. Kubota, who had been given a direct request to play the role of Kaneki by the manga’s author, summed up in one word his feelings when we received an offer for the role: “Surprised!” He commented, “At that moment I really felt that although it’s a tragedy for Kaneki, people’s tragedies are also comedies for others.” Smiling, Kubota further commented, “It’s truly an honour to have received an offer from the creator.”

When the questions started rolling in about the globally long-awaited movie adaptation, Director Hagiwara boldly declared, “I am confident.” As well as having challenged themselves to trying out an array of VFX and sound design techniques, something not easily done when it comes to adapting Japanese movies, the most recommended element to focus on was the choice of casting and making sure it was a fantastic line-up. Because it’s a difficult story to adapt in making sure the balance is right between maintaining the original author’s image while also preserving a sense of realism, Hagiwara heavily praised the performances of the actors, saying “The film hits the mark on maintaining realism, and the actors put on a performance that will continuously exceed your expectations, so much so that you’ll want to just keep watching them.” It was also announced at the event that the film is set to screen across 23 different countries (see above image). Despite the movie not even yet being complete, they have already announced a worldwide release across North America, Europe and Asia, signaling imminent excitement and anticipation in the run up to the release.

Information regarding the movie’s score and main theme song was also unveiled. Staff who worked on the music include Hollywood’s best: Don Davis, who is best known for his work on “The Matrix” franchise, and Nicolas Becker, who worked on “Gravity” and worked on the unique sound of the quinque for the movie. Yojiro Noda of RADWIMPS is also responsible for the main theme song “BANKA” under his solo project “illion.” Kubota himself has worked music by illion before, and displayed his excitement for having him on board, saying “I think his music really brings the world of the movie to life. I’m looking forward to hearing it.”

It was further revealed that official world premier for the movie will be held at Anime Expo in Los Angeles on July 3rd. The European premier will fall on July 7th in Berlin, and the Japanese premier will be on July 10th at Marunouchi Piccadilly in Tokyo. Kubota expressed his enthusiasm for the worldwide screening, saying “I hope to convey this as the world’s ‘Tokyo Ghoul’ by focusing on working hard together with everybody.”

Finally, a message from Kubota himself for fans around the world that are looking forward to the movie’s release. “Because I’m aware just how much this series means to all of you, I wish from my heart for it to grow and be seen by even more people around the world, even if it’s just by one person. I play a big role in the movie so there has been a lot of pressure, but I want to continue working to my fullest to ensure that this 2-hour movie made by all the staff is delivered to everybody.”

“Tokyo Ghoul” will be released on July 29th. In the meantime, keep on reading the manga series! And if you haven’t started already, what are you waiting for?!

Related article: The solo project of Noda Yojiro (a member of RADWIMPS) called, “illion” created the main theme song of “Tokyo Ghoul” which will be released on the 29th of July worldwide.