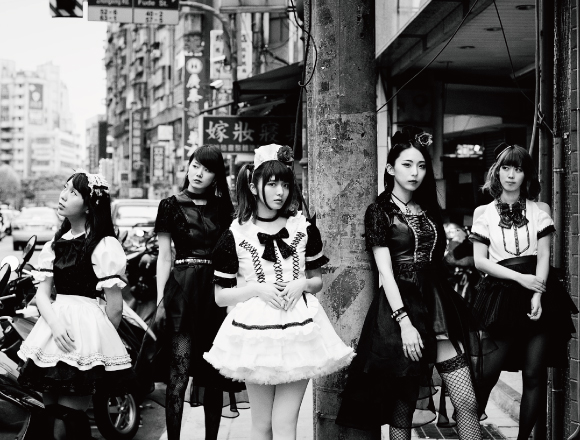 Internationally recognised 5-piece maid rock band BAND-MAID have announced a new tour for Japan called Moeru no? Moenai no? Docchi na no!? which will see them playing 10 locations across the country, starting at cube garden in Sapporo on September 24th and ending at Shinkiba STUDIO COAST in Tokyo towards the end of November.

The news was announced to masters and princesses at the last serving of their first solo serving tour Hatsu One-man Okyuuji Tour 2017 at Ebisu LIQUID ROOM in Tokyo. This string of concerts saw the maids play 8 performances in 6 locations around Japan, all of which were sold out. Their ever increasing popularity at home is part of a certain mission they set out to achieve since their formation—world domination.

And their goal for global conquest is about to seem even more real as they have just announced a world tour slated for Autumn 2017. Details are yet to be announced but all masters and princesses around the world can expect BAND-MAID to serve them up a filling of maid rock very soon.

BAND-MAID will be serving up lots this year. Their brand new single Daydreaming / Choose me will hit shelves on July 19th. They will then go on to perform at SUMMER SONIC 2017, RISING SUN ROCK FESTIVAL 2017 in EZO and other big rock festivals, before taking over Japan in a new tour and then embarking overseas to dominate the rest of the world.

If you haven’t checked out the explosive sound of BAND-MAID yet, what are you waiting for? Pick any song and be served by the fierce music of maids!

Related Article：BAND-MAID their first “one-man” tour begins! They are going to release a new single on the 19th of July.