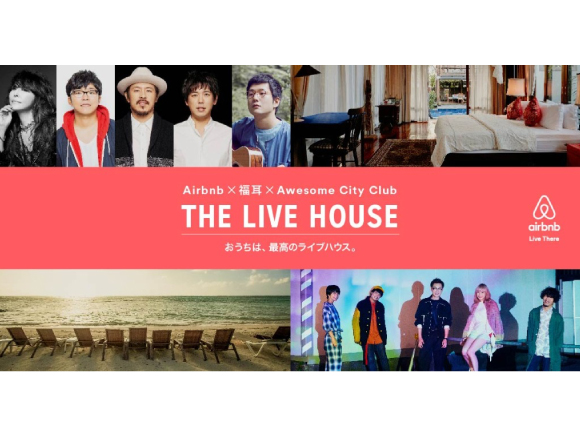 Space Shower TV, managed by Space Shower Networks, Inc., is one of Japan’s biggest music channels, and they have just started their very first collaborative campaign. On August 3rd, Space Shower TV launched THE LIVE HOUSE ～Ouchi wa, Saikou no Live House.～, a collaboration with Airbnb, a popular accommodation booking service used by travelers all over the world. The aim of this collaboration is to have music artists use Airbnb to travel and get away from the hustle and bustle of the busy city. By heading out to different locations and tasting the local food, coming into contact with the locals and such, the project hopes to have the artists express the inspiration they have acquired through music.

Two artists from Office Augusta will be in “THE LIVE HOUSE” – Fukumimi and Awesome City Club. As part of the first installment, select members of Fukumimi (Kyoko, Sukima Switch, Yuu Sakai, Seiya Matsumuro) will hold a live concert on August 20th at a location in Nagano on Airbnb which will be streamed live. The video will be available to watch live on YouTube. This live performance will see the artists performing in much more at-home environments as offered by Airbnb, something much different from their usual routine of playing a big venue. It’s an opportunity to see their faces up close as they perform, something you can’t normally do at a live show.

In addition, Awesome City Club will be performing a secret live show at an Airbnb location in Kagawa. It will fall on September 4th and 3 lucky groups of 6 people will be invited via a lottery draw. It’s a dream chance to enjoy a live performance right at home in your staying quarters. Fukumimi will perform at the end of August and Awesome City Club in mid September. A movie documenting each of their travels will be shown on Space Shower TV, so people who miss the live stream can catch up with everything from there. Full details can be found by keeping up to date via the official Airbnb Twitter (@Airbnb_jp) and Facebook (@AirbnbJapan) pages as well as via Spacer Shower TV (@spaceshowertv). You can also check the campaign website.

Don’t miss out on this unique occasion to see a concert much different from any summer festival or show you would normally attend.

Details regarding live stream and signing up for the secret show can be found via the campaign site here: