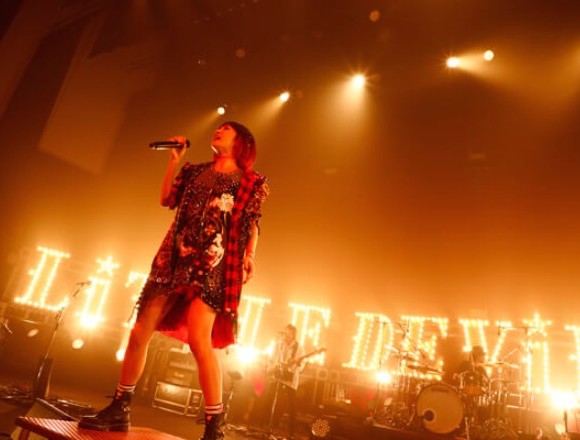 The tour finale saw a completely sold out venue and, after the set-list was complete, an encore from LiSA. Before the first performance of the encore, LiSA surprised fans by announcing, “This is the final show of the tour, so we invited a special guest!” As the crowd chattered among themselves upon hearing this, Aki, the bassist of rock band SID and composer of LiSA’s new single “ASH” which will be released on November 29th, stepped out onto the stage.

“ASH” has been performed at each date of the tour, but Aki himself graced the stage as a guest musician to play alongside everyone and make this a very special night. It was a 1-month early Christmas present to fans. But that wasn’t the only present LiSA had for everybody that night as she surprised everyone by announcing a new tour for 2018. Starting July 2018, LiSA will play two days at the Nippon Budokan in Tokyo and Osaka-jō Hall in Osaka before embarking on a solo tour around Japan and the rest of Asia. LiSA has performed many solo tours overseas, but this will be her first huge Asia tour that also includes performing at arenas around Japan. Early tickets for the Japan arena dates went on sale on November 24th at 21:30 on LiSA’s official fan club website, LISA LAB. The release of LiSA’s new single “ASH” is imminent, set to hit shelves on November 29th. The title song “ASH” can already be purchased digitally; it ranked number one on 13 digital media platforms including the iTunes chart, proving to be a hugely popular release.

We now wait with excited expectations for LiSA in 2018 as she begins preparations for a huge tour.