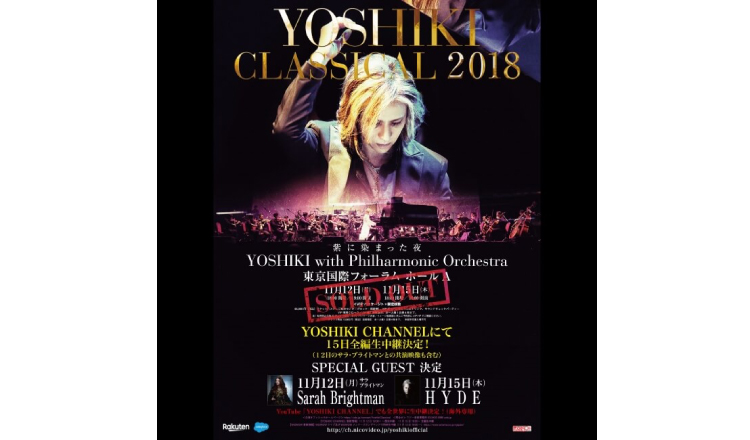 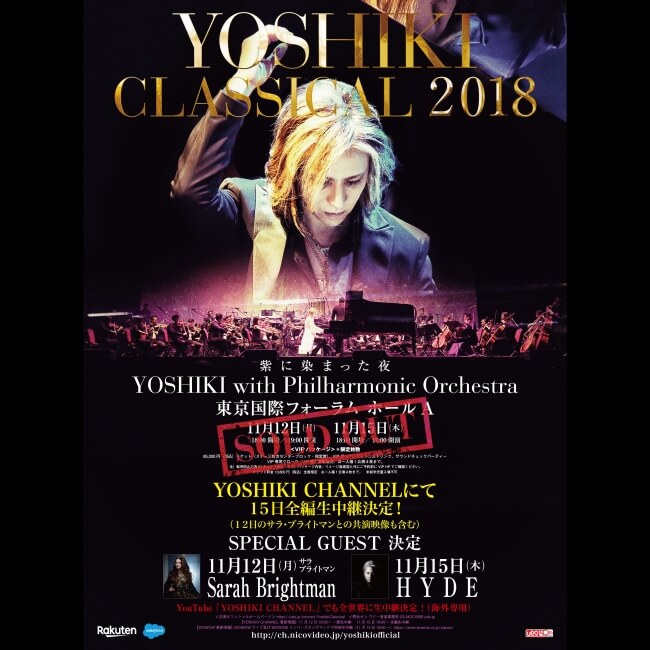 Tickets for both nights sold out the moment they went on sale. In response to demand from fans unable to obtain a ticket, the entire concert on the 15th will be streamed live on Yoshiki’s official channel on Nico Nico Channel. Select parts from YOSHIKI’s performance with Sarah Brightman on the 12th will also be shown during the stream.

The concert will be streamed on YOSHIKI’s official YouTube channel too―which is being renewed as YOSHIKI CHANNEL International―for overseas fans. It will be available to those who pay to become a member of the channel, a new system introduced by YouTube.

YOSHIKI collaborated with Sarah Brightman on her upcoming new album Hymn which is set for worldwide release on November 9. He wrote the lyrics for and composed the song Miracle. Brightman has sold over 30 million records worldwide and has acquired over 180 gold and platinum albums in over 40 countries. She has performed at the Olympics in Barcelona and Beijing. Her song Time to Say Goodbye is one of the biggest selling singles in history.

YOSHIKI and Brightman performed Miracle to a select number of fans at Brightman’s global TV and cinema event “Extravaganza in Bavaria!” at Ludwigs Festspielhaus in Hohenschwangau, Germany on September 21. Japan will mark her first performance of the song at a real concert.

YOSHIKI performed alongside Jean Simmons of KISS at Visual Japan Summit in 2016, a visual-kei festival organised by YOSHIKI. He was also joined by Marilyn Manson at Coachella in April 2018 and Skrillex at Fuji Rock in July 2018. Now he is set to make history once again by collaborating with British soprano songstress Sarah Brightman.

He is also set to perform Red Swan―the opening theme for season three of Attack on Titan―together with HYDE on the November 15 show. It will be a special arrangement backed by a full orchestra.

Make sure you don’t miss the worldwide stream of YOSHIKI’s concert.