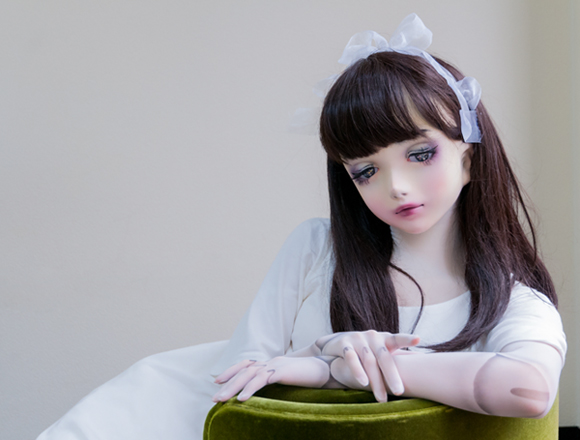 ―I saw a couple of pictures posted up on Lulu-chan’s Twitter and recognized a lot of hakuchum tokyo’s outfits. Is Lulu-chan an official model for hakuchum tokyo? That’s not the case. She took part in their event, which coincided with her debut, so I had her wear pieces from hakuchum tokyo during this specific period.

I’ve had her incorporate these accessories in her outfit in the past so you may have noticed already, but some of my favorites are Emily Temple cute, PINK HOUSE, MILK, RoseMarie seoir, Innocent World and Leur Getter. I also love anything from Harajuku-kei to girly casual, Lolita, classical and retro, so keep an eye out for Lulu-chan’s upcoming outfits! They’ll be versatile, if anything.

―How did Lulu-chan’s debut come about? 。

She’s actually a collaborative work with a creative team called Nukopan, who’s known for the bodysuits they make, specifically for Bishoujo or beautiful girls.

I actually discovered Nukopan two years ago, when they first released their doll heads. When I first saw it, it was as if they’d read my mind and put into shape something that I had always dreamed of. I still vividly remember when this feeling struck me. It’s strange, how people come together. I was at this event and was helping out at a booth for a brand that I started working for this year. I happened to meet someone from Nukopan at the after party. It was pure coincidence, and I had to let them know about the insane amount of delight I experienced through witnessing their doll heads. That was when they told me that they were thinking of launching a fashion brand that took on a completely different approach to what they were doing already, and asked if I wanted to help out. It was smooth sailing from there, and that was where the idea of producing a Harajuku-based “doll fashion model” came around in hopes of creating the world’s cutest identity.

―This is the first fashion show where a doll will be walking down the cat walk – what would you say is the difference between Lulu-chan and a regular fashion model?

Purely the fact that she’s a doll.

Rather than questioning whether she’s a doll or a human being, we’d like the audience to just accept her as a character called “Lulu Hashimoto.” She’s just a girl that wanted to be a doll.

―The desire of wanting to be a doll sounds like it doesn’t necessarily resonate only with doll enthusiasts, but with all girls who want to be kawaii.

You’re right. You see the “doll look” or “look like a doll!” phrases thrown out all over girls’ fashion magazines. You’ll see doll make-up, a doll-like dress, etc. But they’re just one representative expression that ties into the idea of kawaii out of many out there.

If you take it apart, “I want to be a doll” differs from “I want to be a model” or “I want to look like that cute girl.” It does express the heightening desire to be “kawaii,” but becoming a doll is also perceived as a dream that’s impossible to fulfill. Despite how much we say it, it almost seems we never really mean it literally. People give up even before they try.

―So to you, becoming a doll is about reaching the ultimate level of kawaii.

That’s right. Lulu Hashimoto made it come to life.

I’ve actually making ball-jointed dolls with a spherical figure for eight years now. I was fascinated by beauty that doesn’t wear out, which was what got me started. I’ve never actually had the experience of being a doller myself. As I mentioned earlier, the only reason I was able to meet Nukopan was because we both had our own booths out at the same doll event. I found out later on that doll events were also a challenge for Nukopan.

―I heard you collaborated with Koh Ueno from Tableaux in order to make Lulu-chan more doll-like?

I’d been a huge fan of Ueno’s ball-jointed stockings ever since they came out, and I’d actually met him before as well. The way he creates beauty is phenomenal, and he’s got great, innovative ideas. He has always placed an emphasis on “real clothing” rather than “cosplay” or “flamboyancy” and this was also another reason I’ve been attracted to his style. The moment Nukopan and I decided to collaborate, I knew I wanted Ueno to be a part of it too. I admired him so much, so it was such a pleasure to have him accept my offer. ―It almost seems like dollers transcend humans in a sense due to the fact that they can fully customize themselves and change their physical appearance however they want.

I’m not so sure about that. I feel there are certain jobs that only human models can handle, and others where only doll-ers can handle. I just feel the window of opportunity got wider with doll-ers coming into the picture.

For example, the one thing that’s possible by humans is the fact that they can bring the whole look to life. Even if the makeup is perfect, they’ve still got room to express themselves – which makes humans perform better with casual looks. On the other hand, if you’re going for an unwavering beauty that’s down to the t, the spark that ignites that nestling dream of “being cute,” or an artistic look, I feel dolls perform better. The makeup is done flawlessly yet naturally, whilst they’re free to put on whatever wig or color contacts they’d like, which means they can get their hair to be a color that’s difficult to achieve with regular human beings. The height and proportions can be adjusted if necessary, I’m trying not to settle down with a certain look for Lulu-chan just yet. The best part of doll-ers is that they can keep changing to look however they want, whenever they want. This allows them to freely express themselves through their sense of fashion.

－Lulu-chan is more doll than human too.

Right. But it’s important to differentiate with dressing a mannequin. It just doesn’t create the same effect.

－Right. They’re soft to the touch.

Right. It’s easier to see the silhouette of the person when it’s a live human being wearing the outfit, rather than a mannequin. But dolls are definitely more apathetic than human beings.

－I saw a couple of photos of Lulu-chan with varying heights, but I could see how they were all her.

Lulu-chan’s identity is mainly focused on her doll head. Even if her torso is a little longer or her height a little shorter/taller, that’s the reason why you can tell they’re all her. You’ll see Lulu-chan in all shapes and forms, but don’t question which Lulu-chan is the real Lulu-chan, they’re all her. We want to tell the world that you’ll see Lulu-chan change in shape, form, and in fashion, but they’ll still all be her.

―That feels very new. It’s futuristic, but at the same time there are elements that resonate with the modern age, which is what gives us this strange feeling.

Rather than people telling us “this is the cutest thing that has happened yet,” we get comments like “here comes a new genre!” or “I feel like I’m witnessing something really peculiar.” I feel having a doll-look is slightly different from having an anime-look as well. Maybe that’s why it inflicts a strange feeling to our fans.

―It really feels like a new age has dawned upon us.

Virtual Reality (VR) and augmented reality (AR) have both been a trend lately, but what’s interesting about doll-ers is that they bring fiction to life without the use of CG.

Next » MMN INTERVIEW: Chatting With the Producer of the Very First “Doll” Model, Lulu Hashimoto