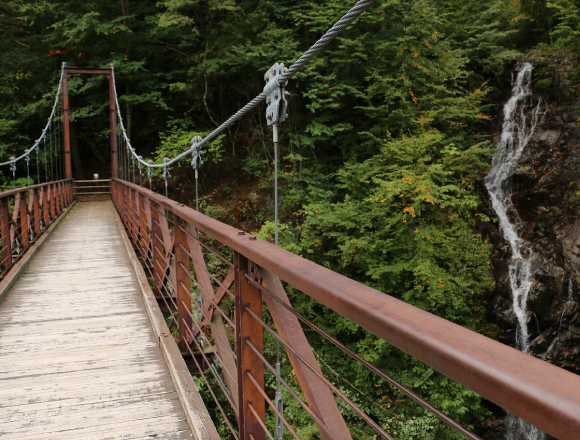 It is great fall season in the area around Okutama-machi and Hinohara-village which has 1500 meter high mountains and some lakes includeing Lake Okutama which is one of the important source for supplying drinking water for Tokyo. This west Tama area is popular for people who enjoy hiking. As a matter of fact, the free shuttle bus is going to run this round trip route which connects JR Okutama station, Okutama lake, Yama-no-Furusato-Mura to Hinohara-mori for limited period in 2016. The local buses do not go to these sections. This shuttle bus runs a wonderful route which goes to quite popular spots in west Tama area such as Ogochi Dam in Lake Okutama where you can see the dynamic scenery and Hinohara-mori which preserves beautiful Japanese beech.  If you are going to walk in the forest in Hinohara-mori, it is recommended to go around Mito great falls which only takes about an hour to stroll.

It is also good to go sightseeing efficienctly by using a taxi. Keio Jidosha co. is setting a recommended route for tourist which goes from Okutama station, Nippara cave, Nippara valley, to JR Oume line Sawai train station.  (It takes about three hours, cost 17,280 yen. Prior booking is essential.) You can visit great places such as Nippara cave which is said to be one of the best sightseeing spots in Tokyo, Nippara valley which is little-known but a good place for seeing fall leaves, and Ozawa Sake brewing which is pretty close from Sawai train station.

Why don’t you go enjoy the nature in Okutama-machi and Hinohara-mura in this great fall season by using this special route?

▶How to use shuttle bus：You can use this bus for free without reservation, but its tickets are available on a first come, first served basis.  You are also required to fill out a questionnaire.

*The bus stop in Okutama station is in front of the tourist office where you go left after getting through the ticket gate.  Please be careful not to mix up with other local buses.

*if seats are full (40 seats are available), you won’t be able to use this bus even standing up.

*It takes about 15 minutes to Lake Okutama, 40 minutes to Yama no Furusato-Mura, 1 hour and 10 minutes to Hinohara mori from Okutama train station.

*Please note that if you used Ginkgo liner, there is no returning shuttle bus from Hinohara mori on that day. There is local bus which goes to JR Musashi-Itsukashi train station from Hinohara mori. (The last bus leaves at 4:45PM.)

*Prior reservation is essential.

*Admission for facilities are not included.

*This business is a demonstration experiment of Tokyo and Tokyo Convention and Visitors Bureau.