Stay Home With Etsuna: Tips On Having Fun With Kids While During the Lockdown Doing Crafts and Cooking 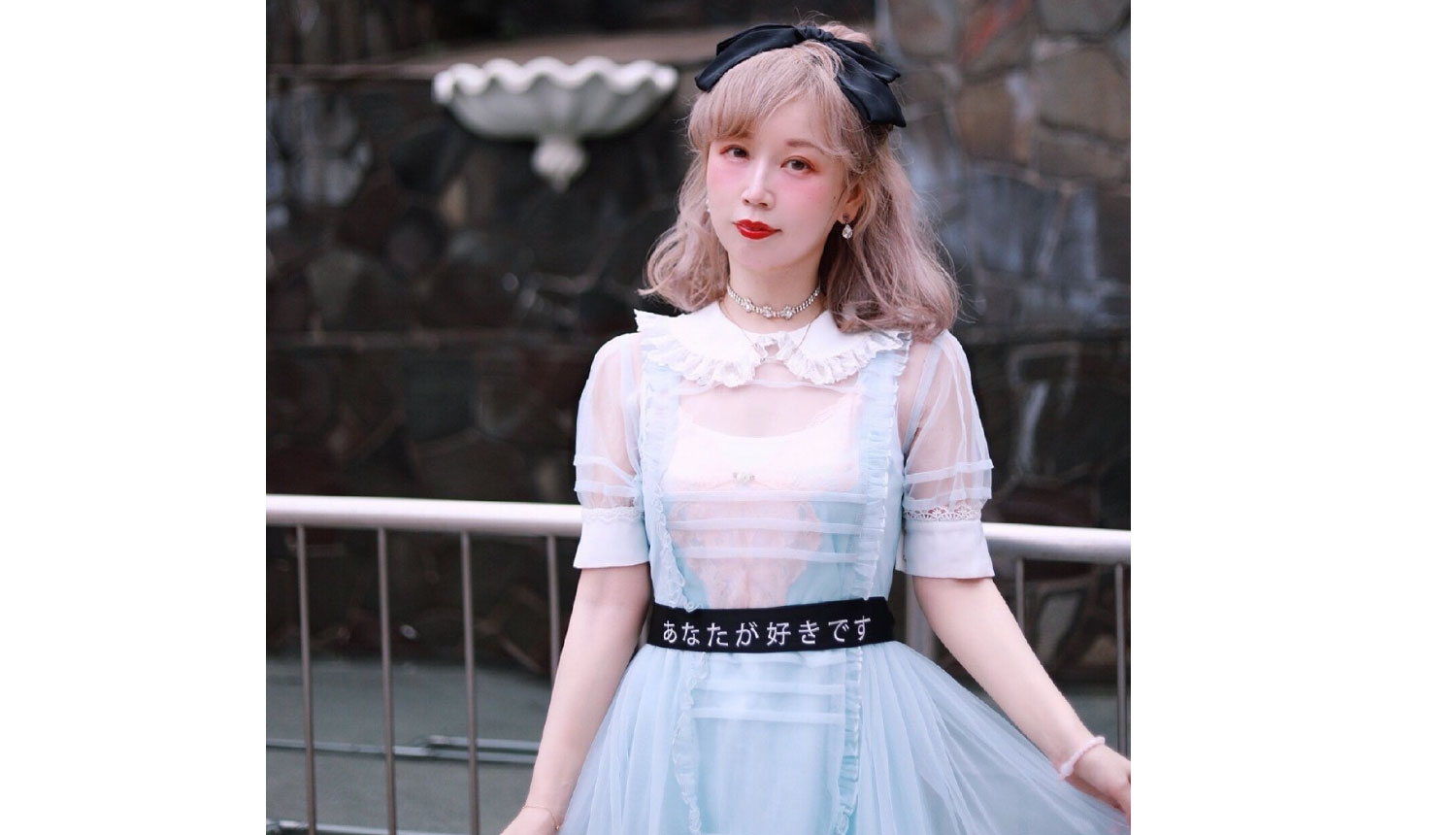 Here at MOSHI MOSHI NIPPON, we post news and information about Japan in six languages. Our aim is to deliver a variety of content related to Japan for those who love and enjoy Japanese culture.

Right now, people across the globe are in self-isolation as a result of the coronavirus pandemic. The same goes for Japan too, so we’ve taken this opportunity to create a new series on the website to show how we’re spending time at home here in Japan.

The future is yet uncertain, and we hope for normality to return for all of us soon. We hope that this article takes your mind off the situation, even for just a little bit, to help you feel calmer, and just maybe it might give you some tips on what you can do while spending time at home. 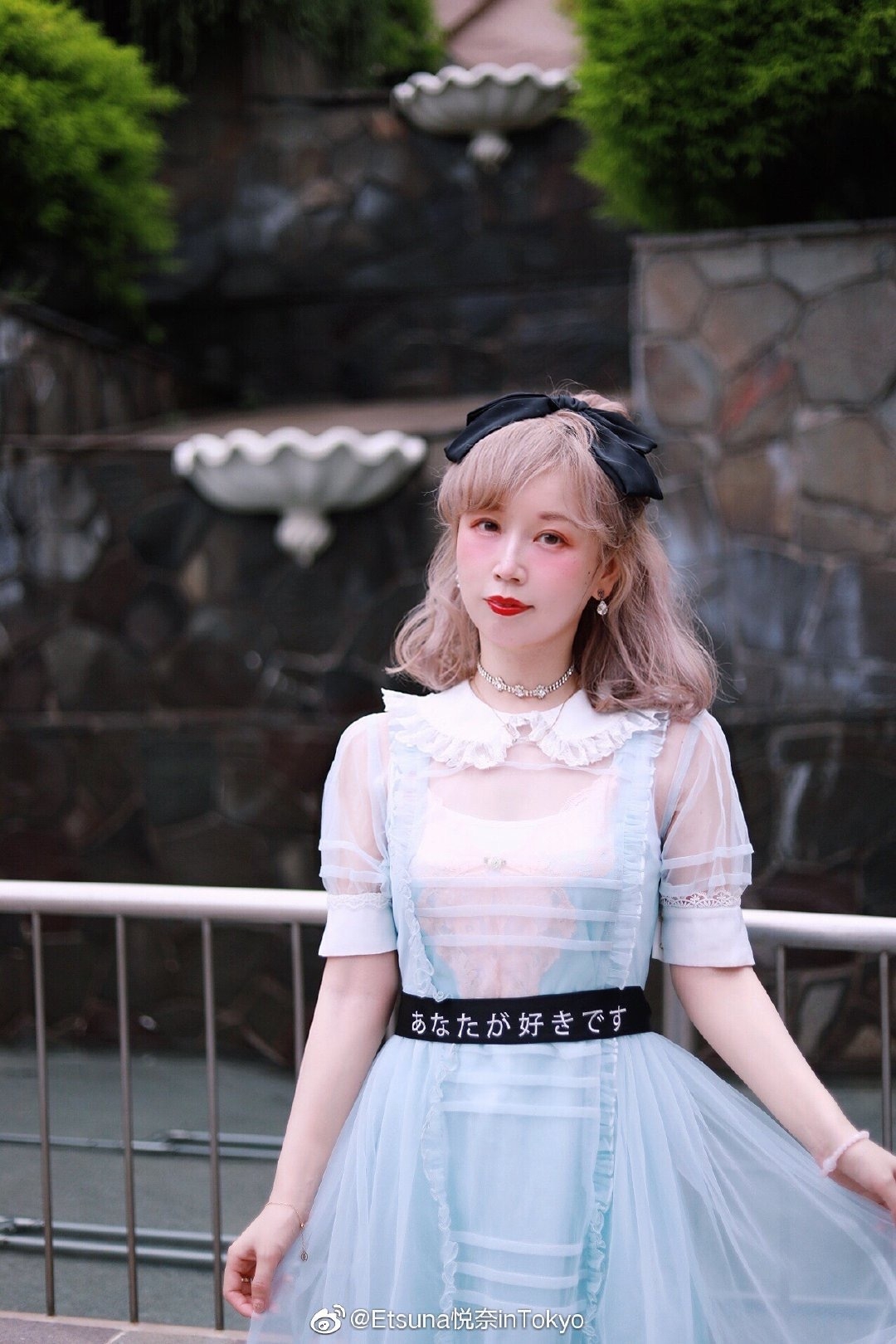 Etsuna is a model and talent from China who currently lives in Japan. She owns her own fashion brand where she designs clothes, and she posts news about Japan on her social media pages including Instagram and weibo. She’s also a mother of two.

She kindly took some photos for us to share with you to show how she is spending time with her family at home right now. 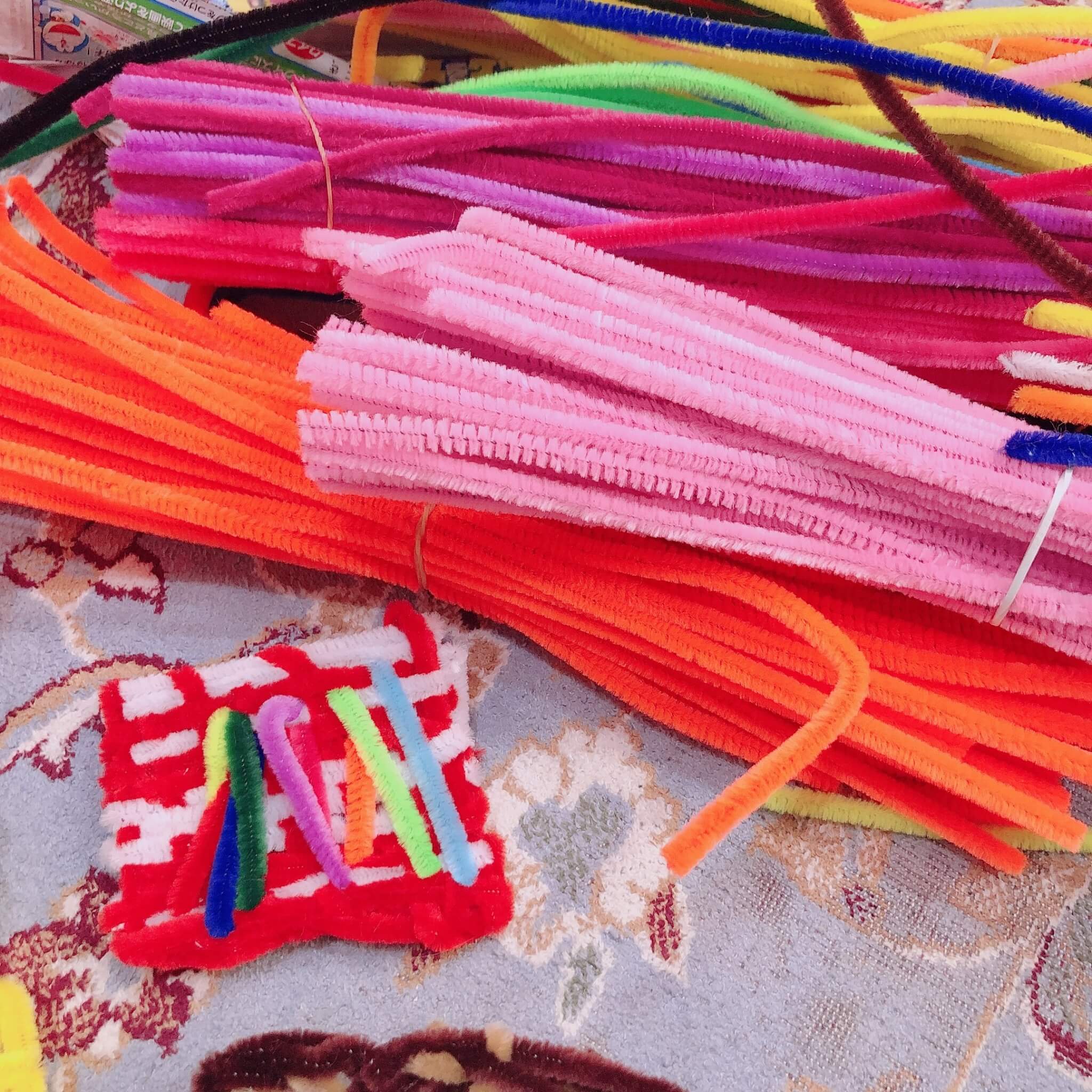 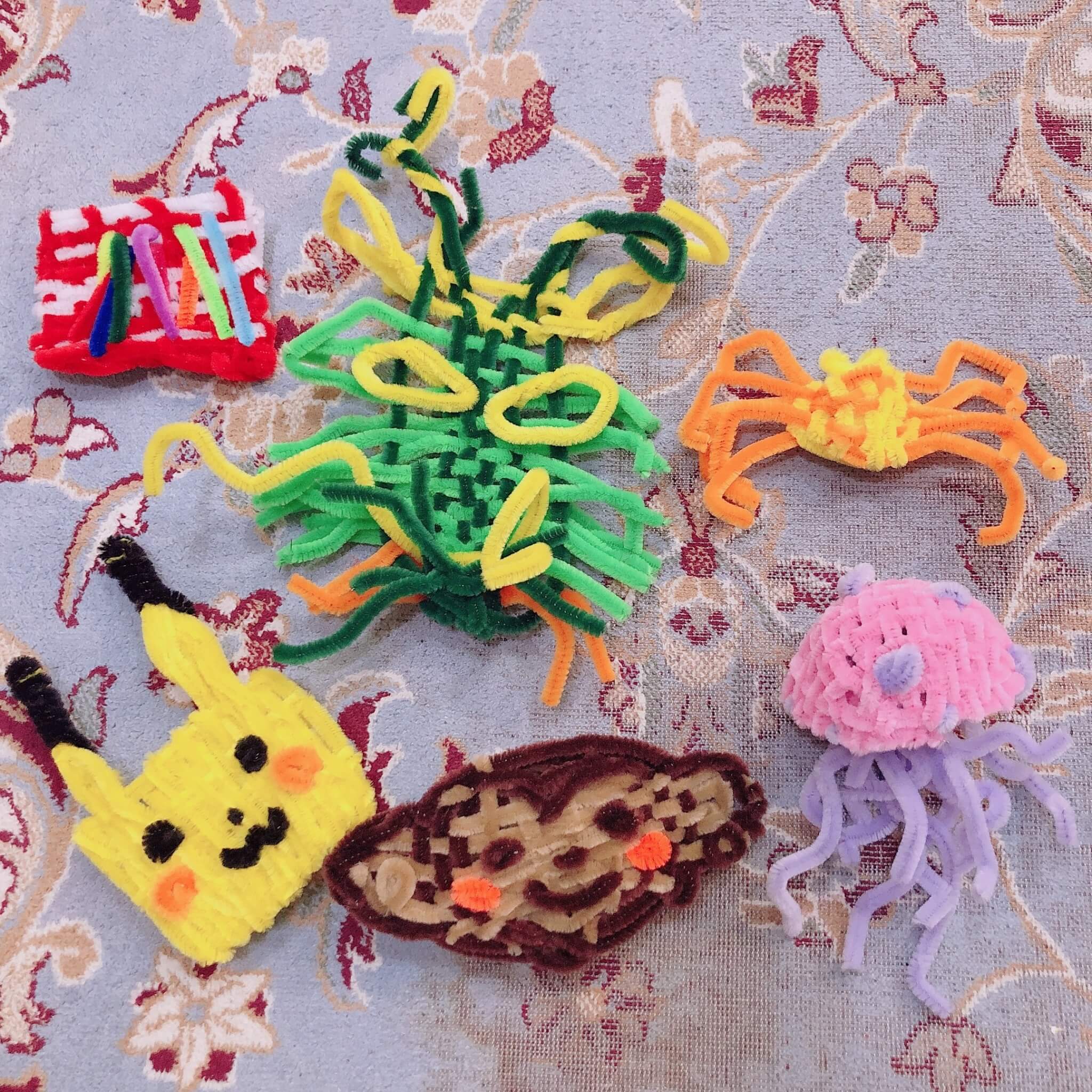 Here she’s prepared some colourful pipe cleaners! She’s combined them to create various different things, like Pikachu and a jellyfish. The colour of the jellyfish is just like Etsuna’s usual fashion aesthetic♡

Simple banana art that kids can do too 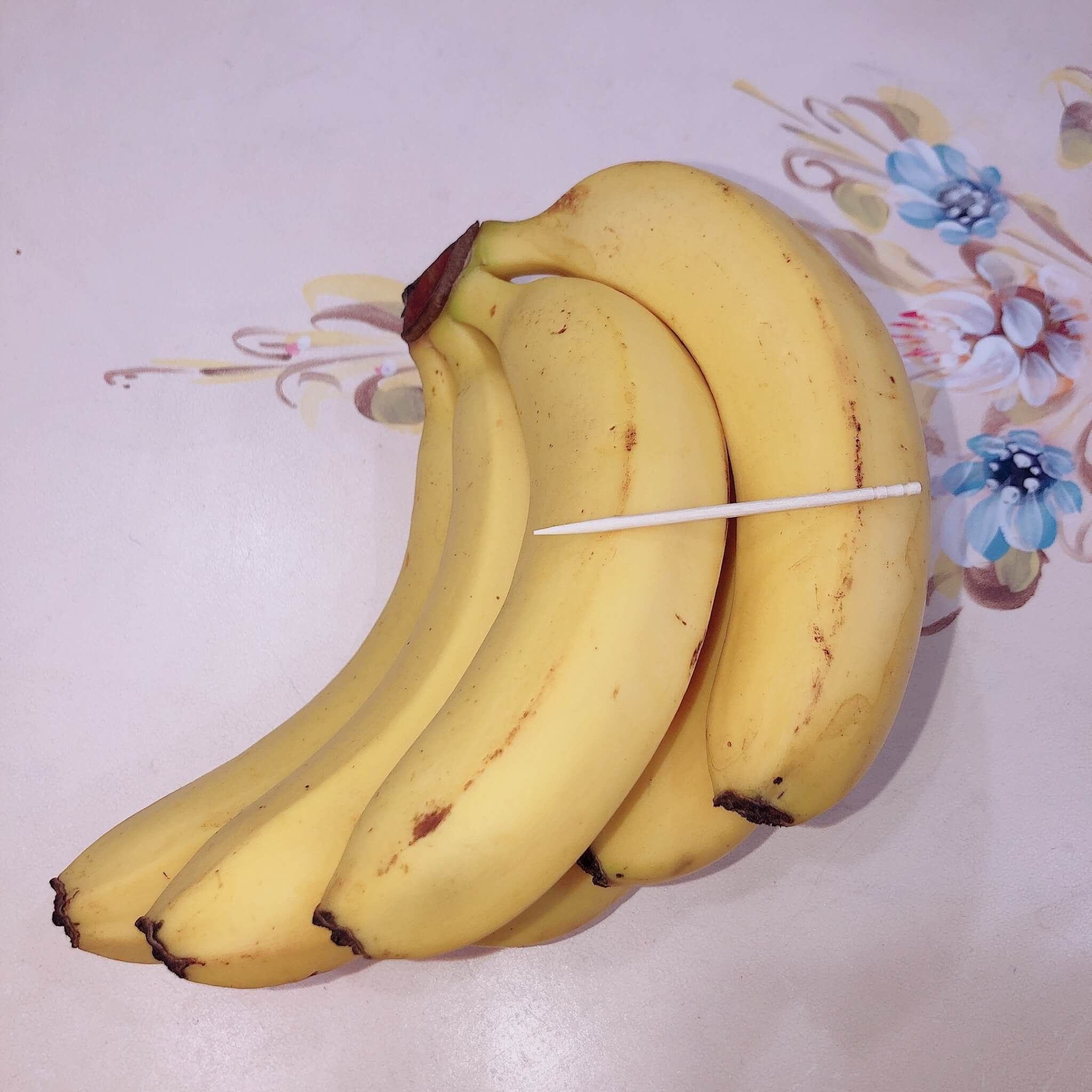 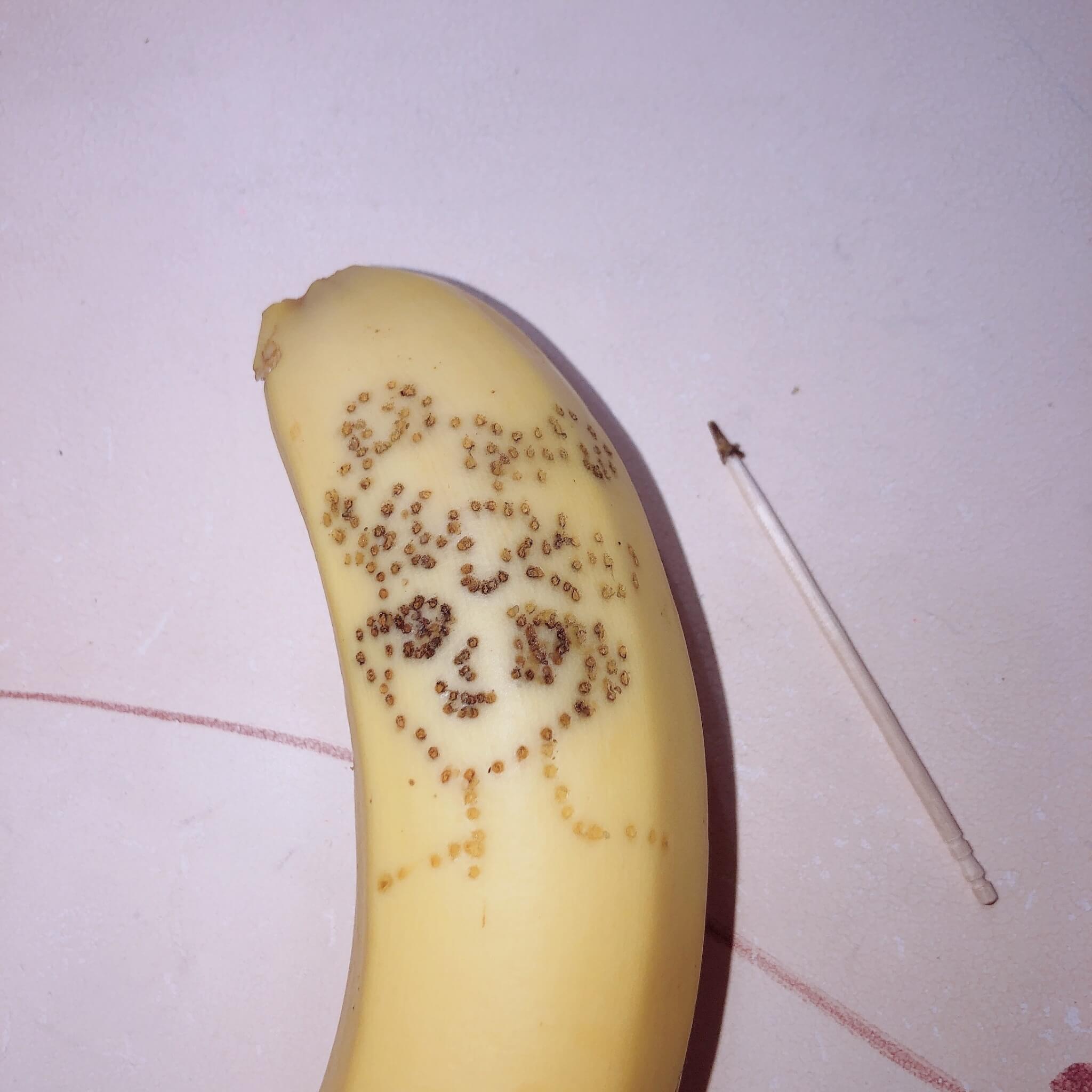 All you need for this are bananas and a toothpick. By using a toothpick you can ensure you don’t actually pierce the banana, just the surface of the skin. Stick at it and within 30 minutes to an hour you’ll have created your own piece of banana art like Etsuna. 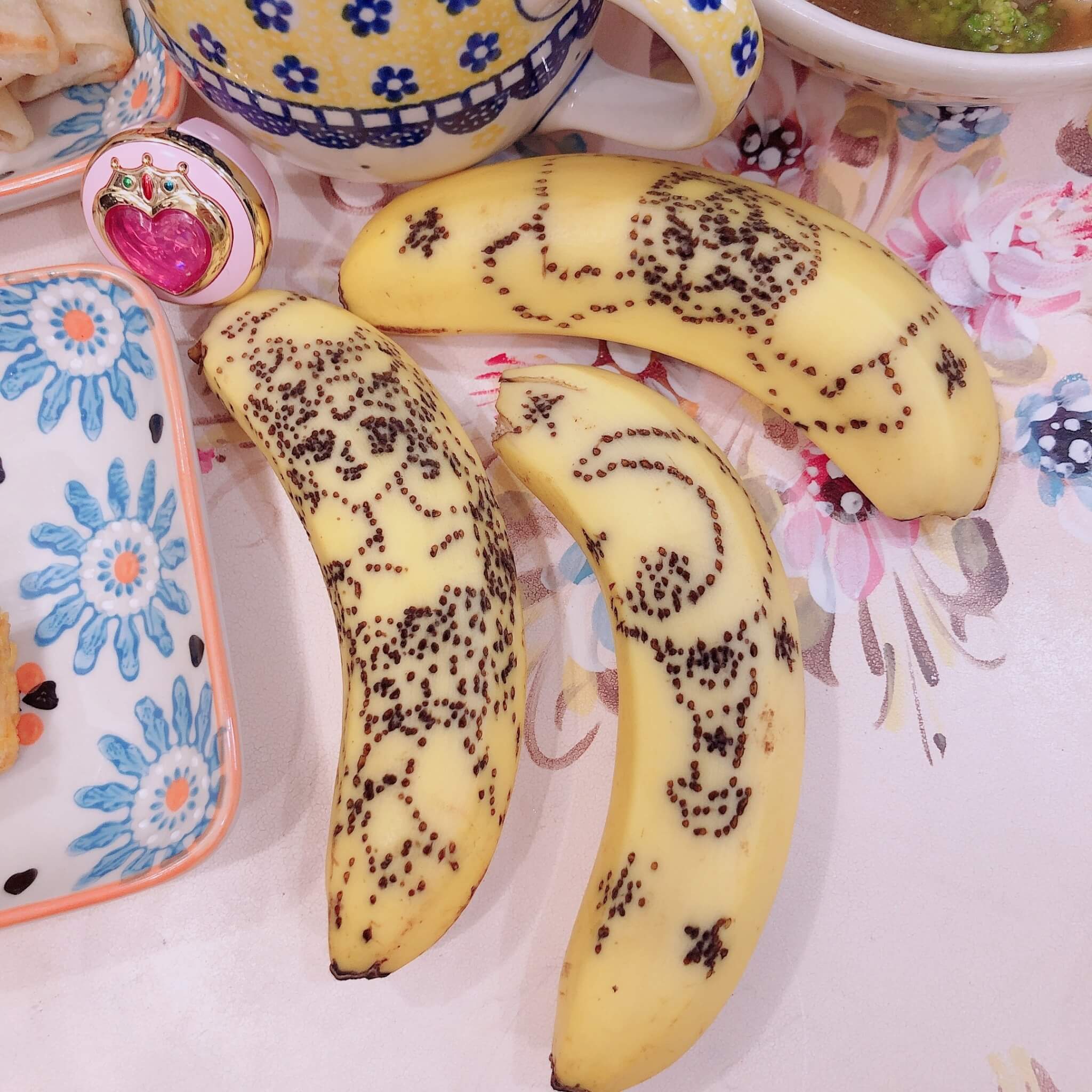 Her banana art is the real deal, as expected from an art college graduate! 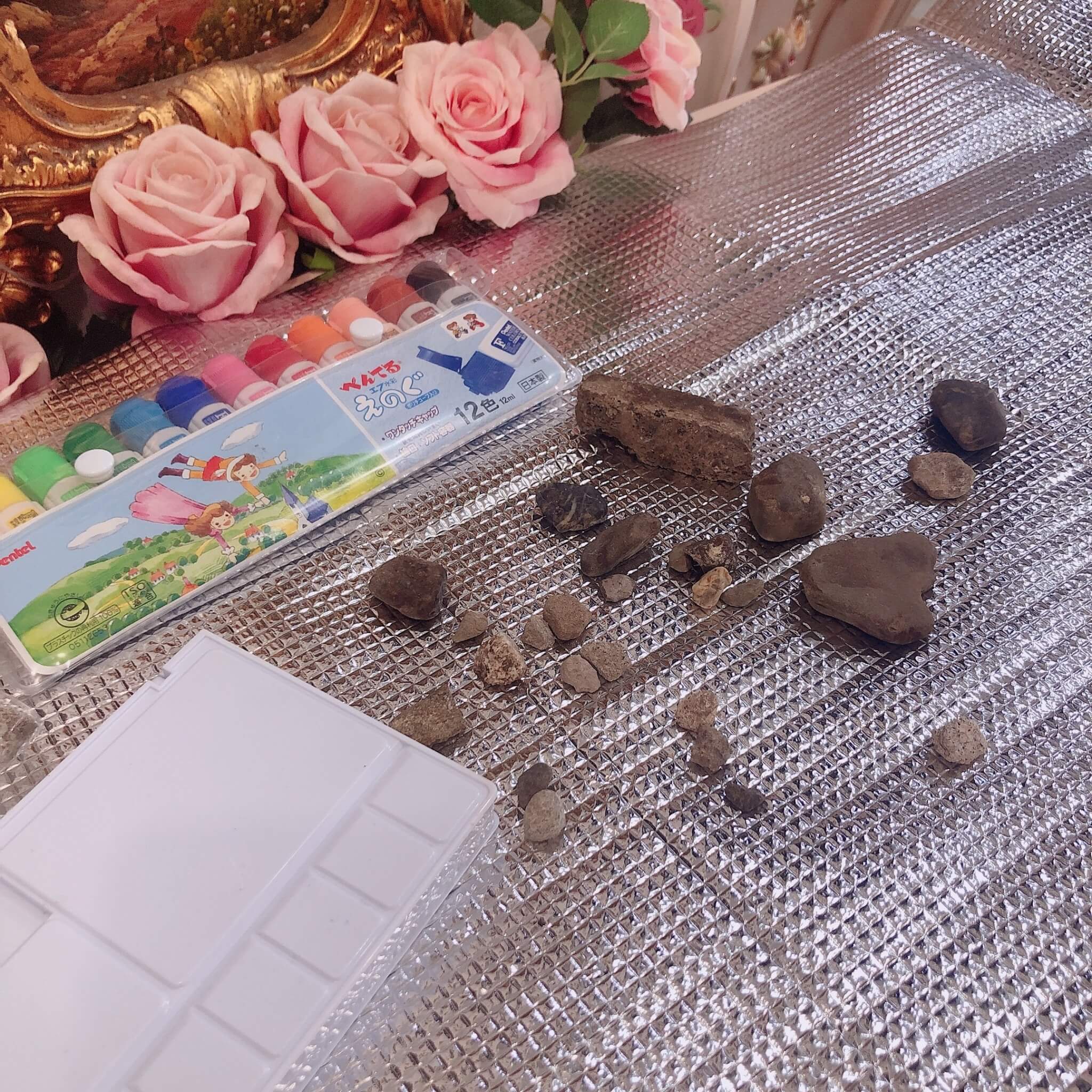 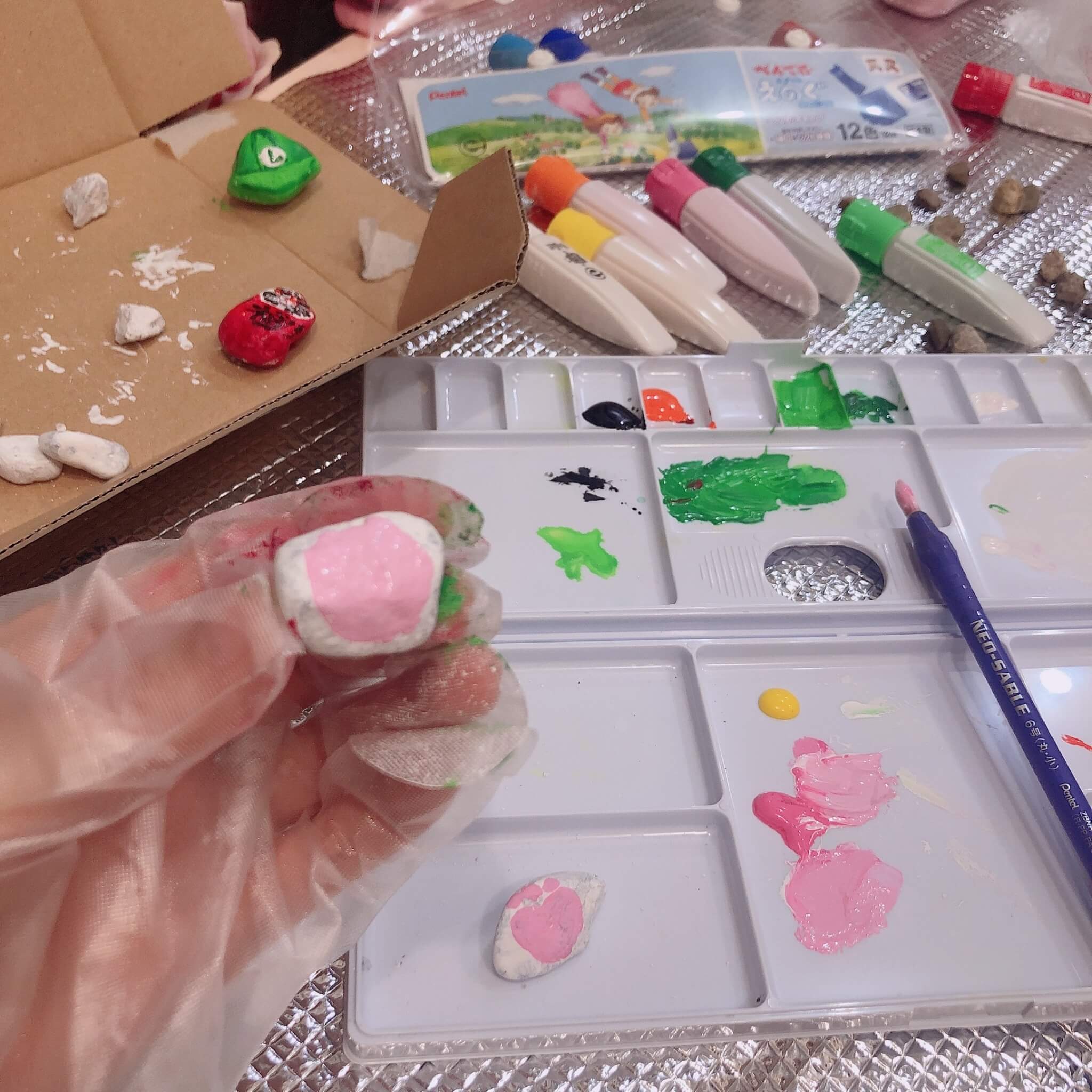 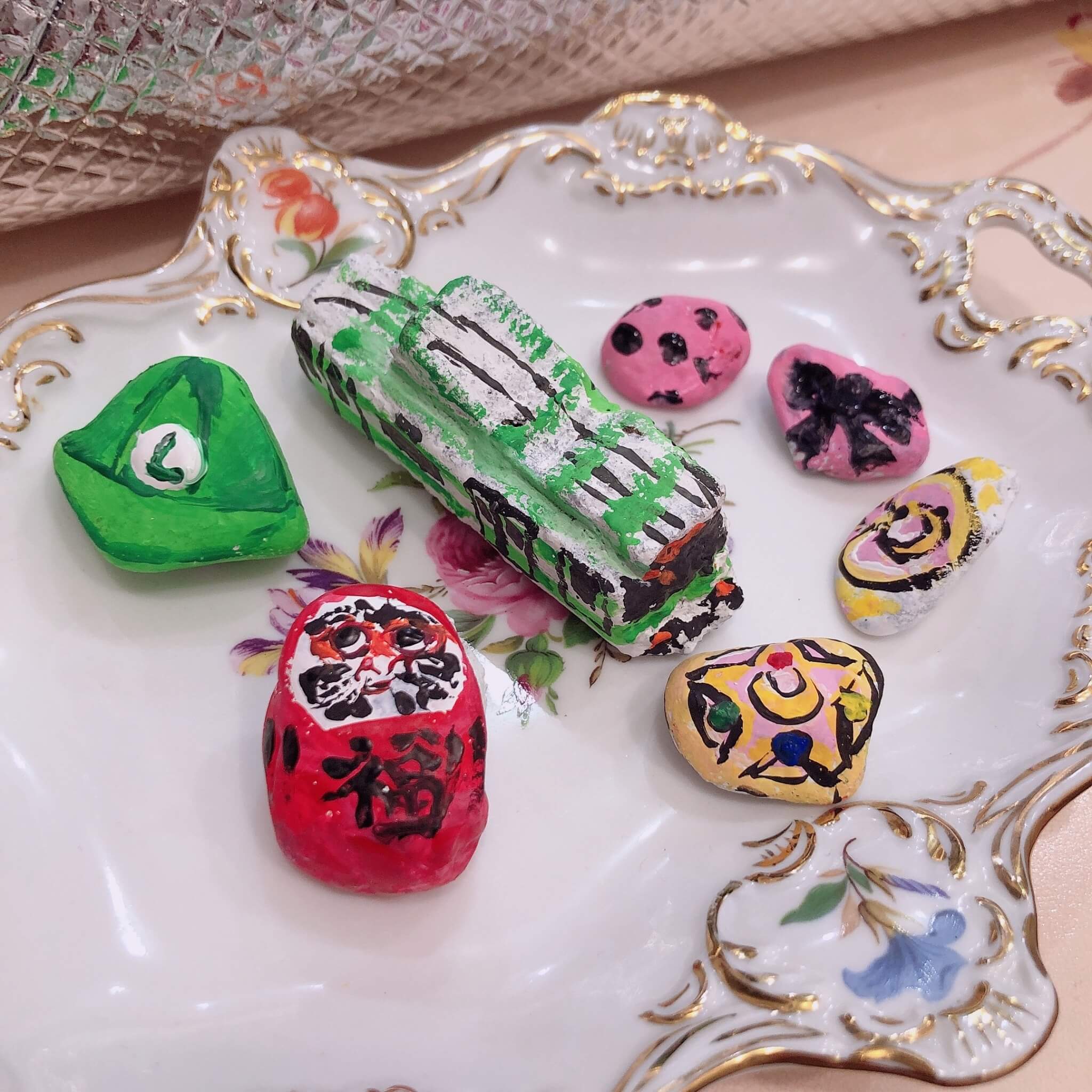 Here, Etsuna’s prepared various rocks of different sizes. Add your own paint touches to a rock of your choice to create your very own mini figures. Possibilities are endlessーEstsuna’s tried everything from a Japanese daruma doll to Luigi’s hat.

Enjoy your own Japanese festival at home 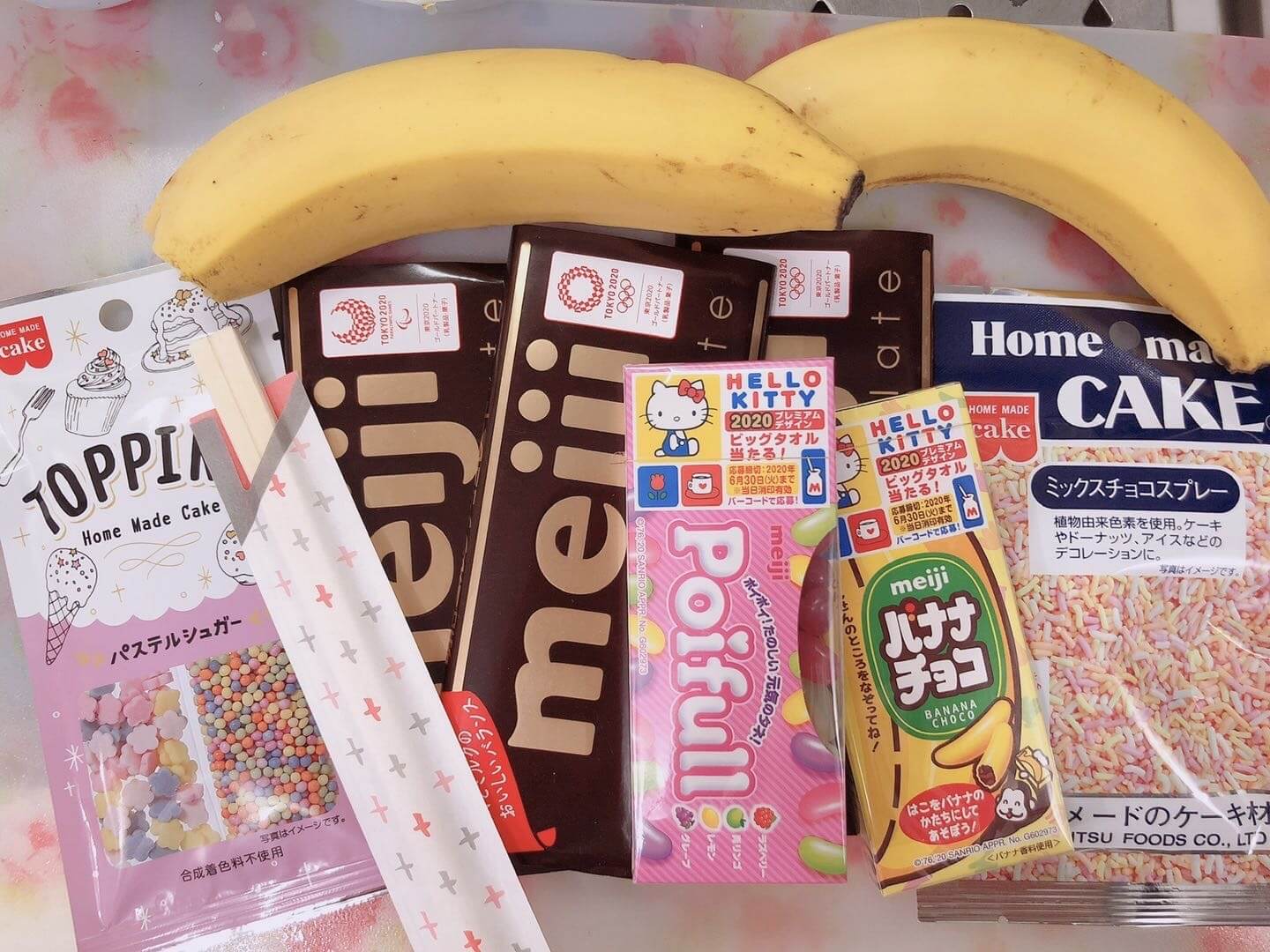 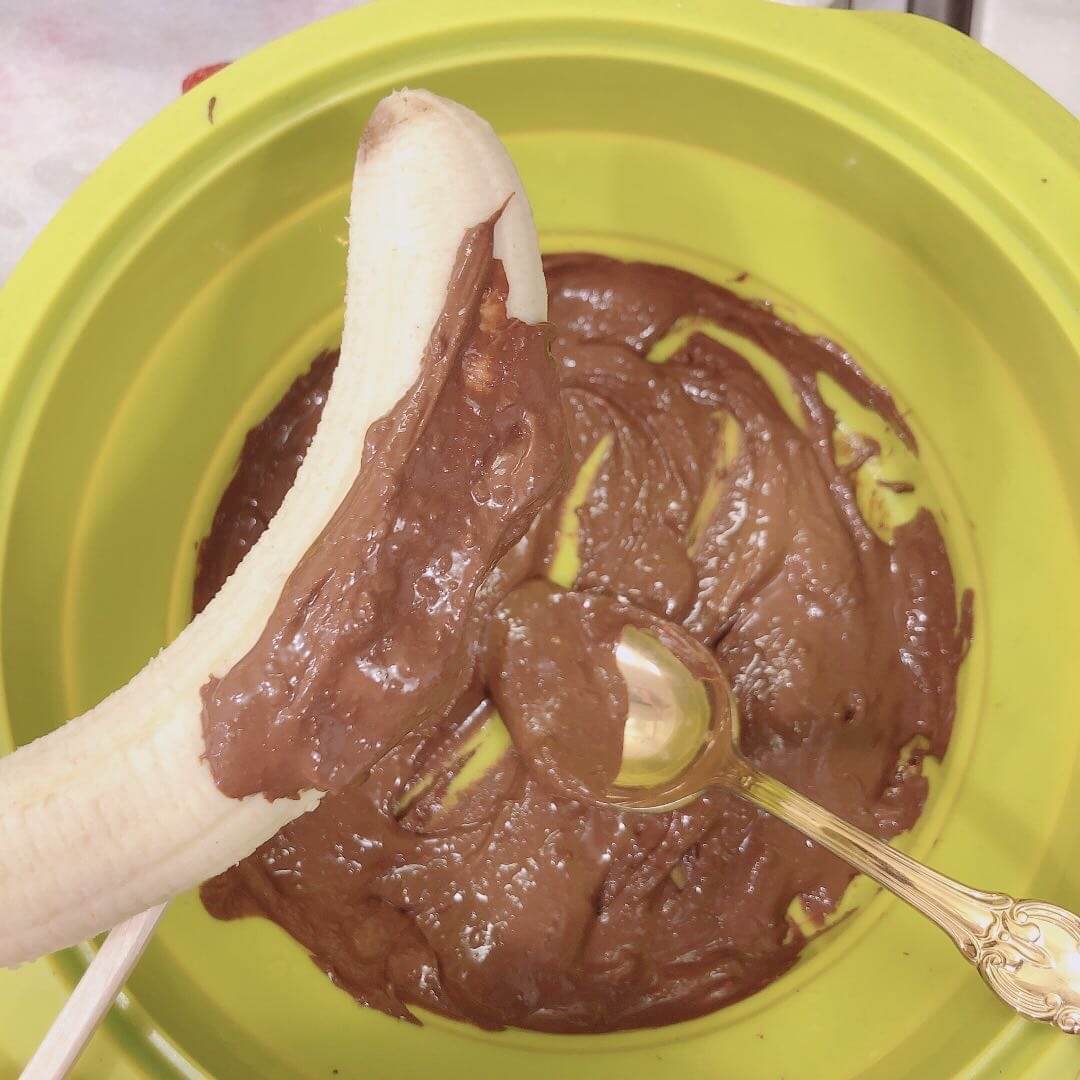 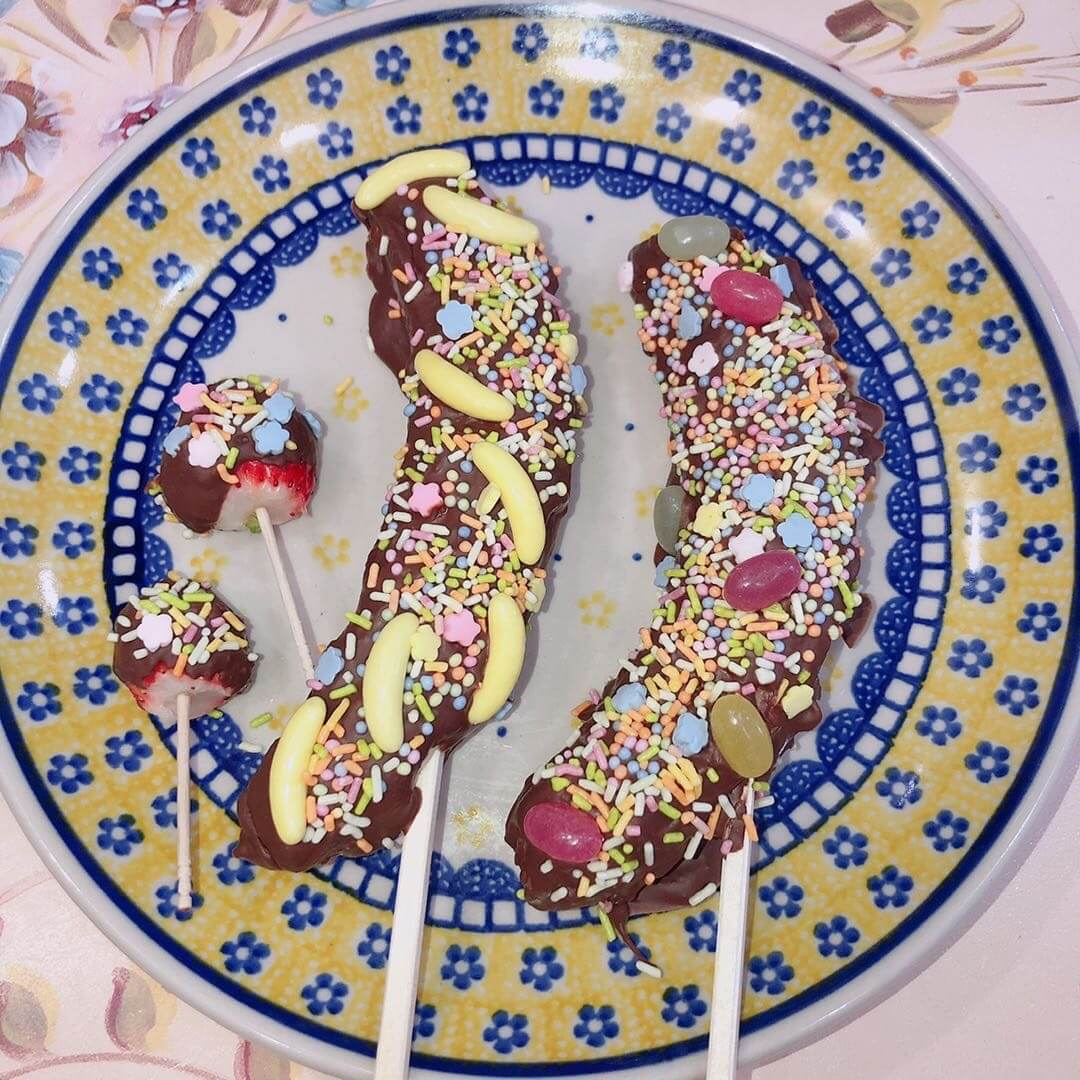 You can make chocolate bananas like they sell at Japanese festivals using the same bananas you made the banana art with. Etsuna decorated hers with various Japanese candies like Pastel Sugar and Poifull. To make them, simply skewer the banana with a chopstick, lather the banana in chocolate, and add toppings of your choice! 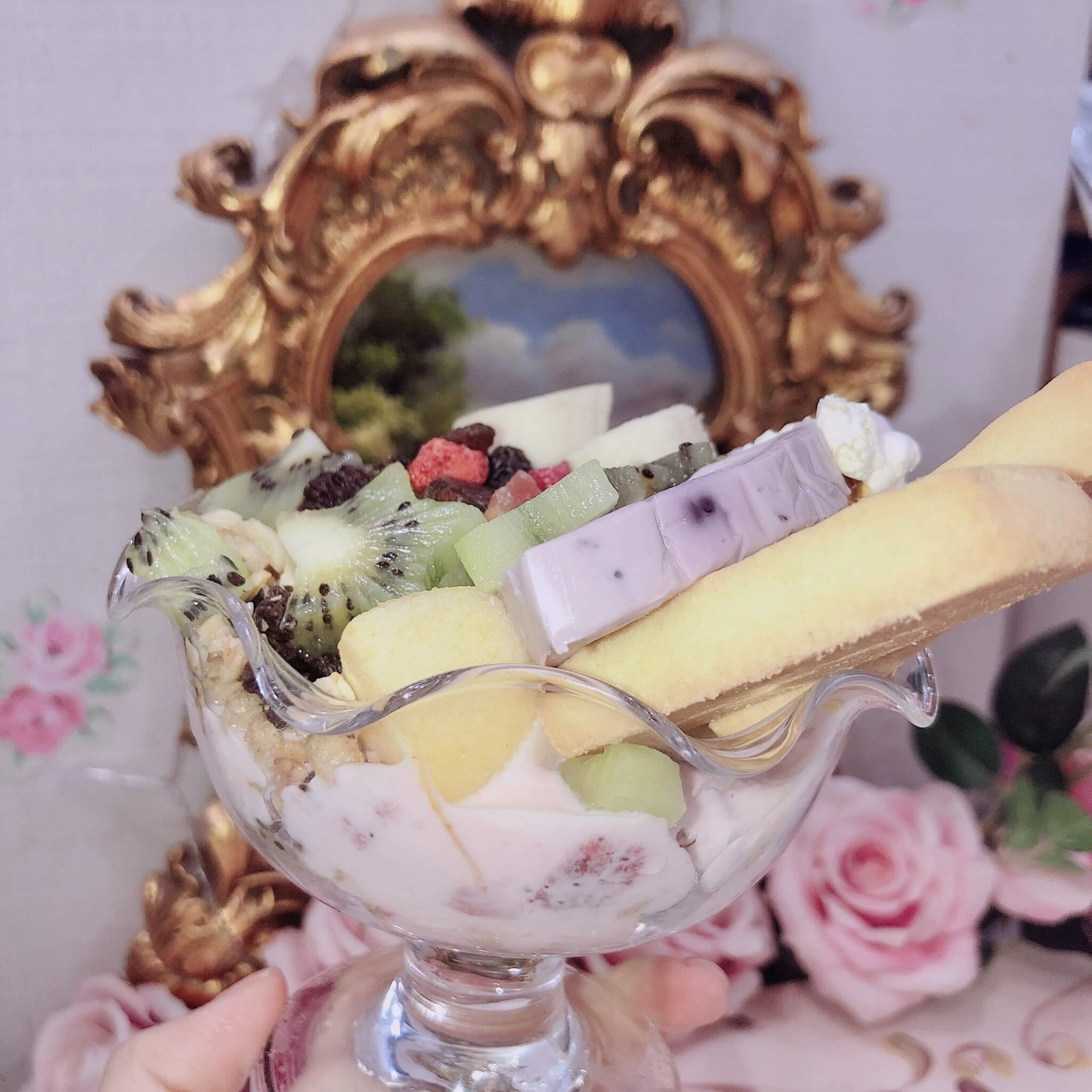 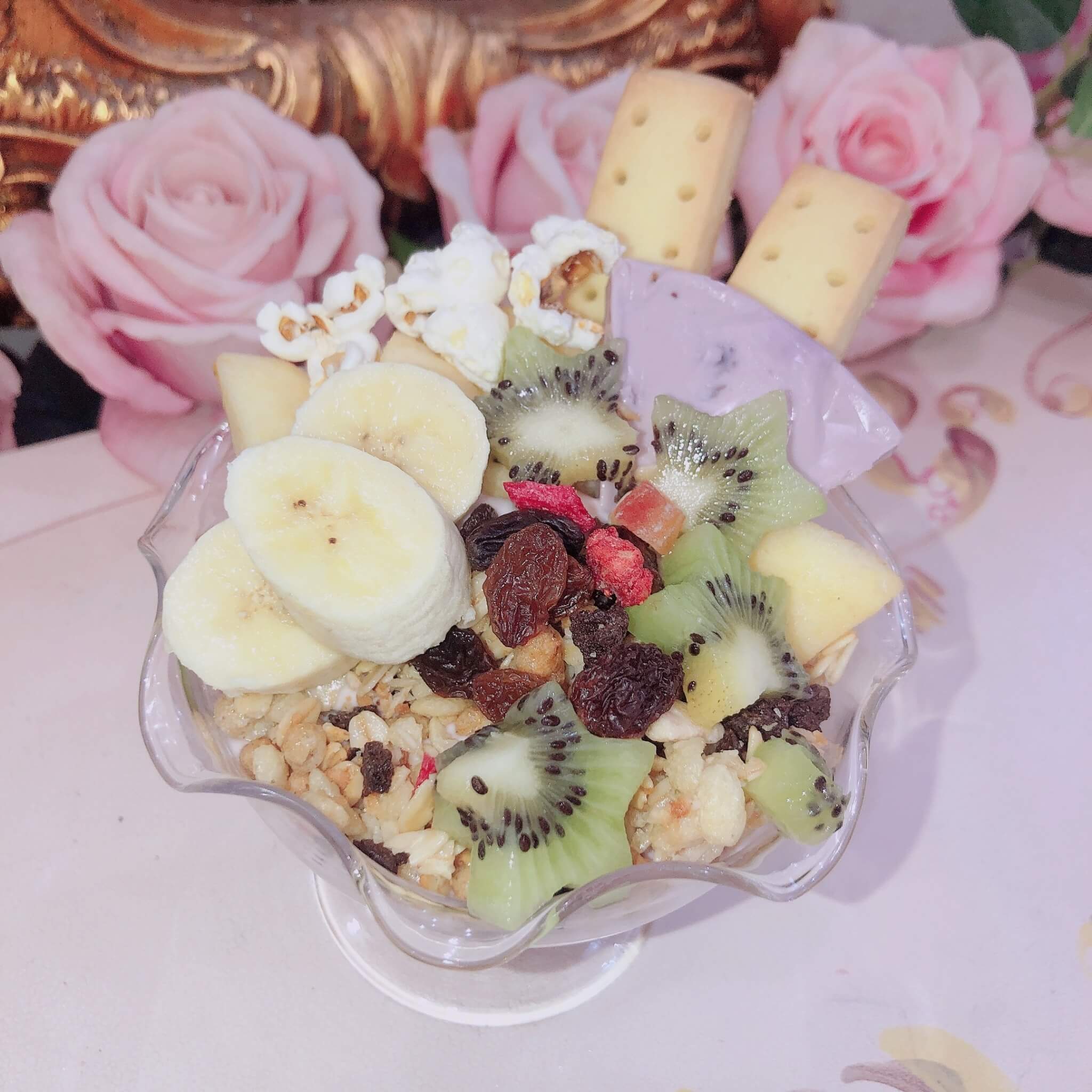 With a little planning, you can make some super cute snacks. Here, Etsuna has made a tasty parfait with yogurt which she topped with heart-shaped kiwi and banana, granola, raisins, and other surprise delights. Try making a cafe-quality dessert like this yourself at home. 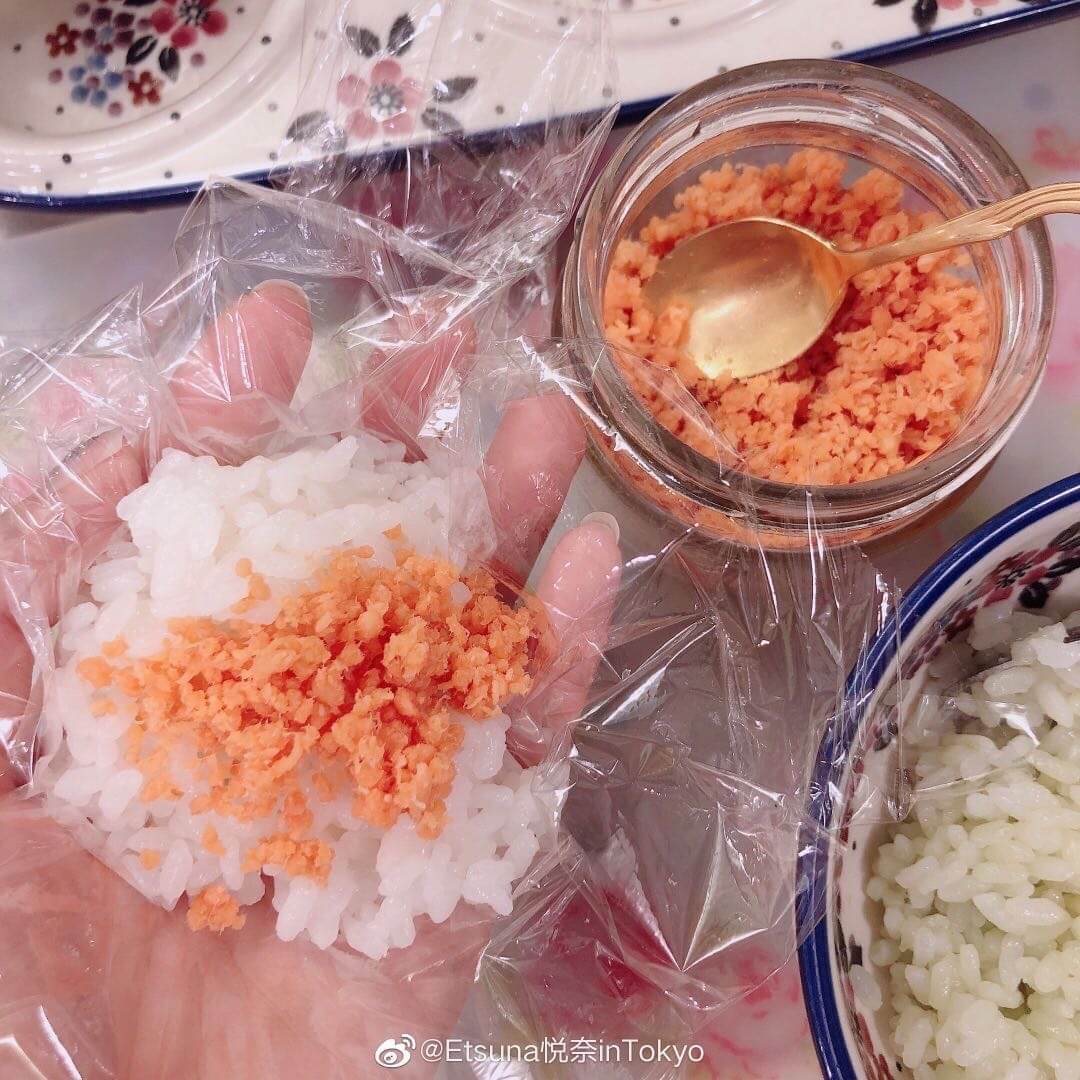 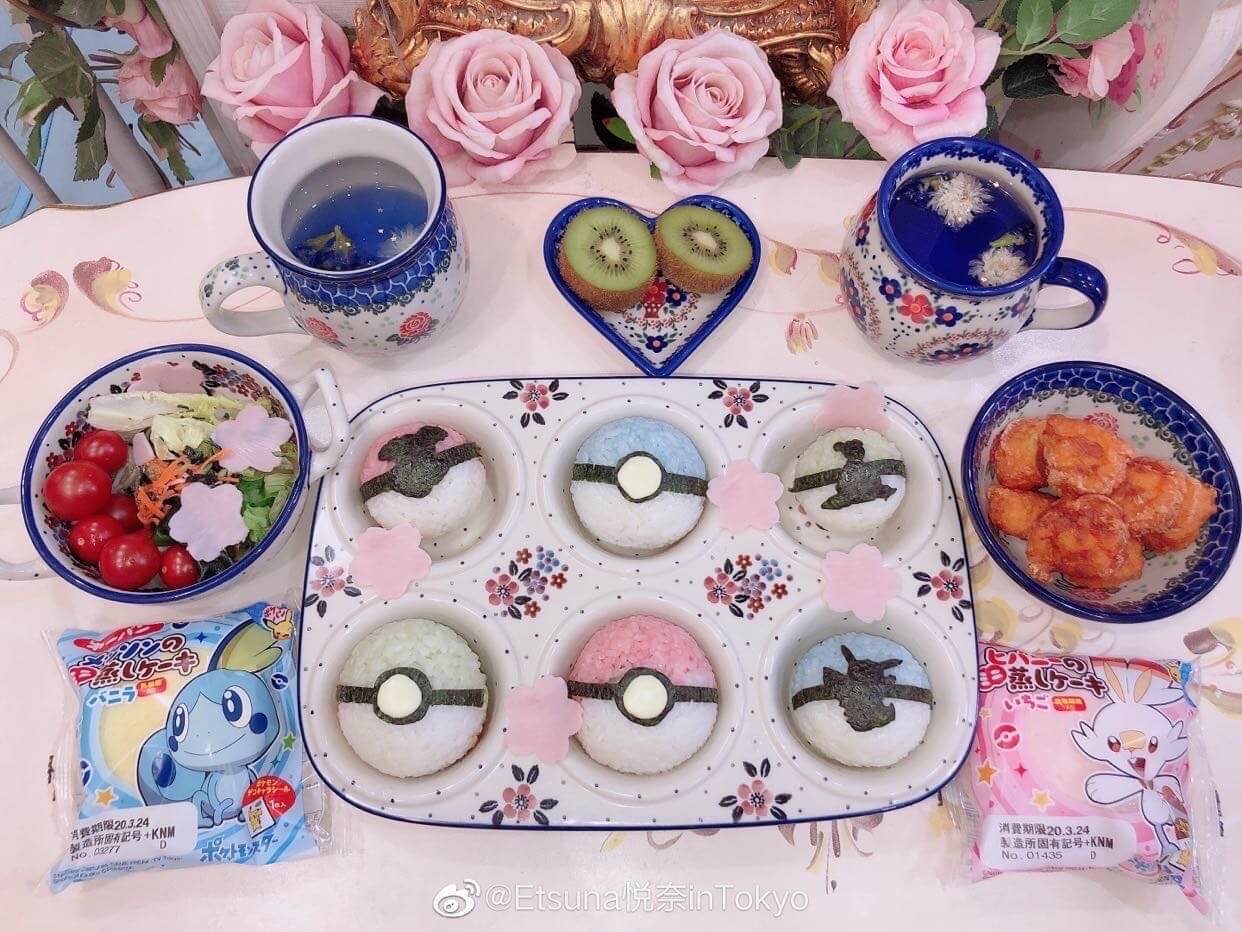 Estuna’s kids love Pokémon, so she made some onigiri rice balls that look like Poké Balls for them. They’re filled with salmon flakes and umeboshi dried plum. They’re then topped with seaweed and cheese to make the Poké Ball details. If you have some Japanese ingredients at home, like Japanese rice and seaweed, try it yourself too.

Etsuna also answered some of our questions below.

What’s the secret to spending time at home?

“Kids can get pretty tired of staying at home all day, so to make it more fun and so it doesn’t feel like self-isolation for us, we do pretend play like having indoor picnics and playing shopkeeper. You can create situations that make it feel different from being inside, and my kids seem to be enjoying that.”

Please give a message to those reading this article

“The world is in a tough spot right now from the coronavirus. There are many people having to self-isolate in lots of different countries, from Europe and America to China. Make time to have fun at home so you can protect the lives of yourself and those you love.”

Next » Interview: What Type of ‘Kawaii’ Did This Popular Foreign Influencer Find in Japan?