【NagasakiStroll】Why Not Kyushu? Come and View the Gorgeous 99 Islands 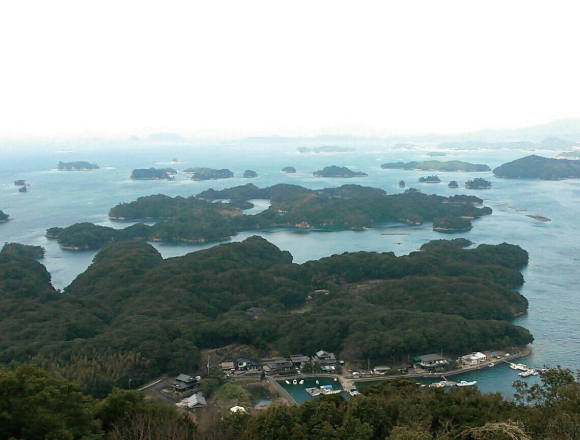 Tokyo, Kyoto, Nara, Osaka… A majority of tourists would always start and end their Japan trip within these prefectures. These prefectures are very lovely places, but why not come sightseeing in Kyushu! If you want to experience something different from other tourists, Nagasaki would be a great place to visit.

In Kyushu there are many wonderful prefectures like Kumamoto for the castle, Oita for onsens, Fukuoka for ramen, and then comes Nagasaki. Today I will show you one of my favorite places of all in Nagasaki prefecture. Look at this amazing view, full of green and blue. Can you count how many islands there are in this photo? There are about 17 islands within this picture, but there are actually more than 200 islands!

This place is called 99 Island Pearl Sea Resort (Kujyu-kushima). 99 refers to “many”, and there are actually 208 islands.

Pearl Sea Resort offers a fantastic way to enjoy the view of these beautiful islands.

They have a harbor offering sightseeing boats, the elegant boat Pearl Queen, and the colorful vessel, Mirai that will cruise around the islands. You can enjoy the cruise both below and above decks on the boats. I enjoyed being outside, especially at the top of the deck where I could feel the breeze. We cruised around numerous islands and were able to see oyster rafts for pearl cultivation and ducks that were swimming nearby. You can also enjoy various types of marine life found in the local waters at Umikirara Aquarium! Entrance is ¥ 1440 for adults (¥ 720 children). Last but not least, my most favorite spot!

There is a natural land bridge created by blocks of stones by the beach where you can walk across on the days at special low tides. It only happens once or twice every month so if you’re lucky, you might be able to walk on the bridge to the mini gate at the end of the land bridge!