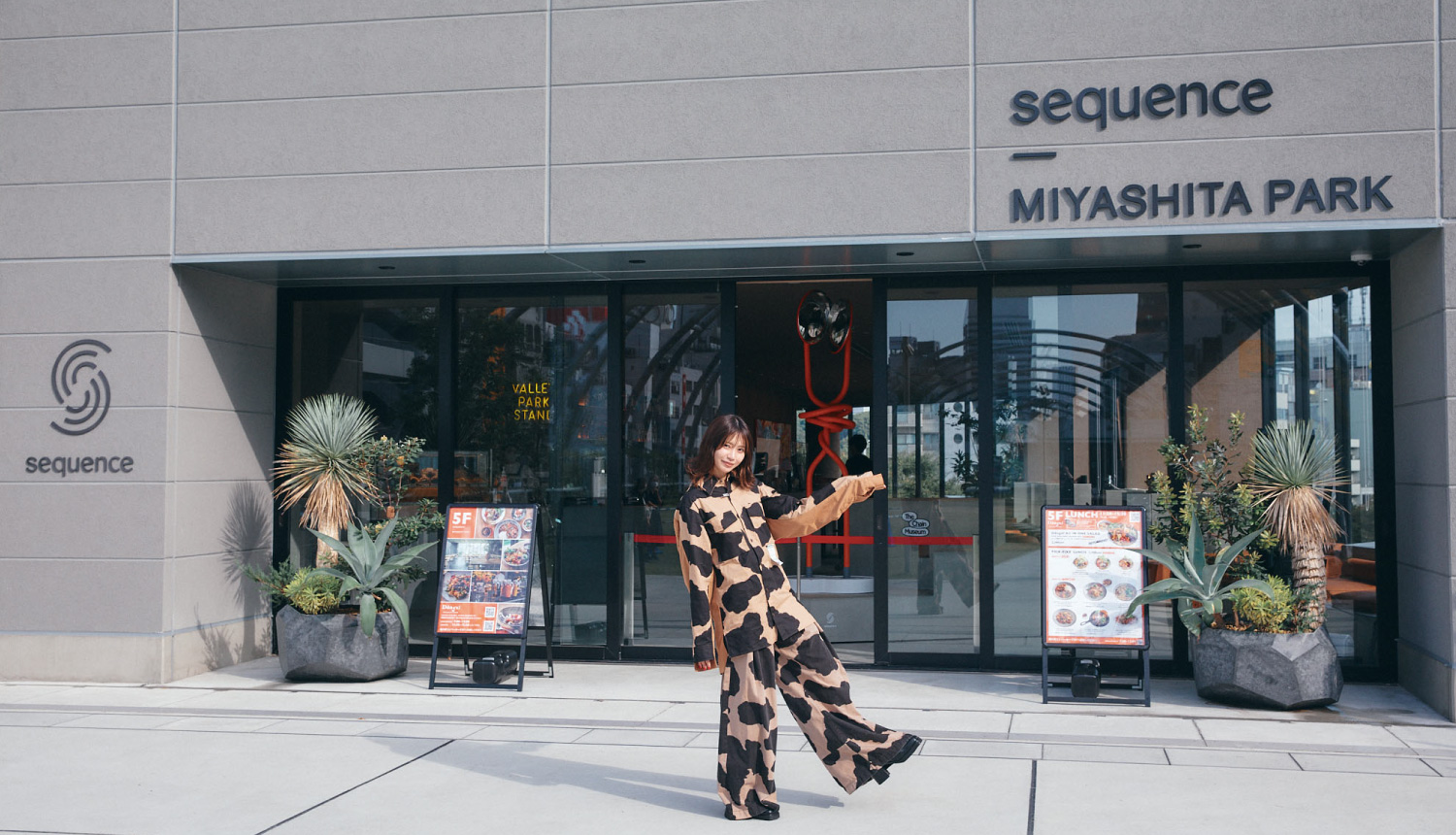 In Episode #10, SILENT SIREN drummer Hinanchu wanted to go and stay at a hotel in Tokyo, so she decided to take a trip to sequence MIYASHITA PARK, a new hotel inside Shibuya’s new landmark shopping complex MIYASHITA PARK which itself opened in August 2020. 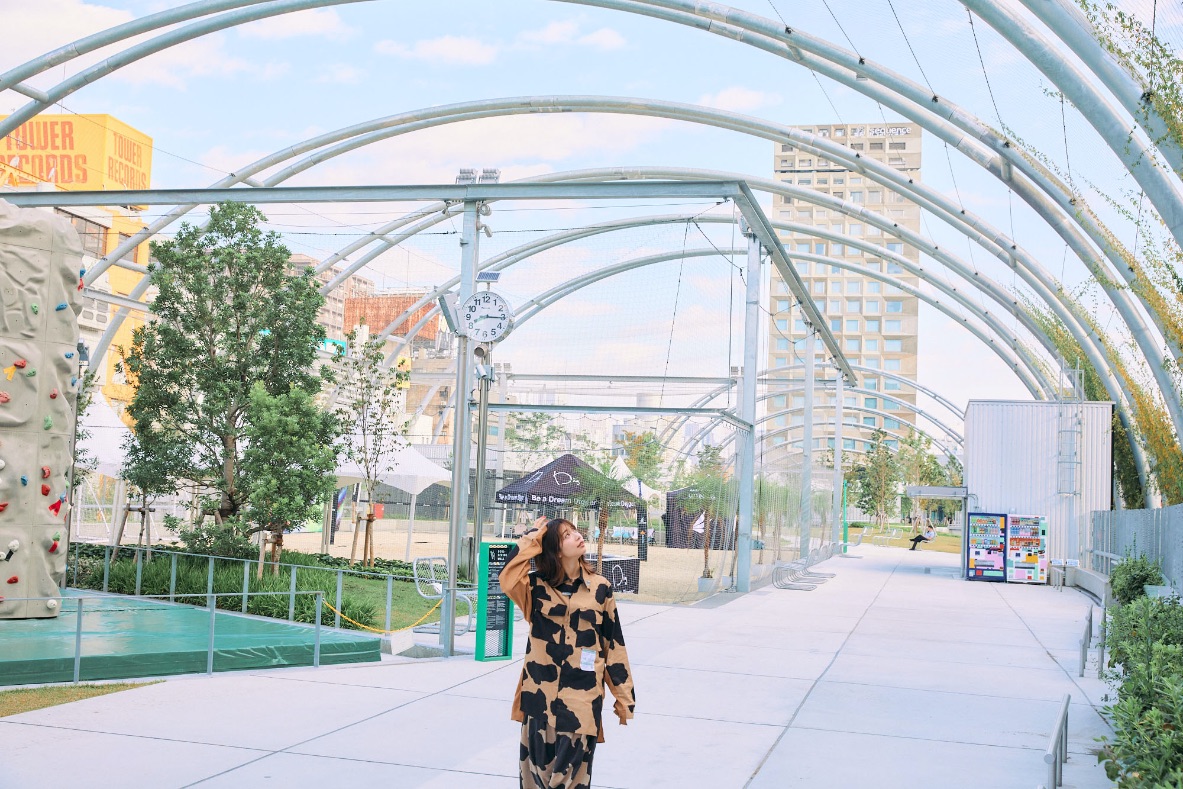 The newly-reborn MIYASHITA PARK is a four-storey shopping complex with stores located on the first three floors and the top floor being home to the park. The park houses a range of exercise and sports sites like a skate park and bouldering wall as well as the green area and even a Starbucks. This park is so spacious that it’s easy to forget it’s right next to busy Shibuya Station. It has been open for three months now and is already adored by the community. 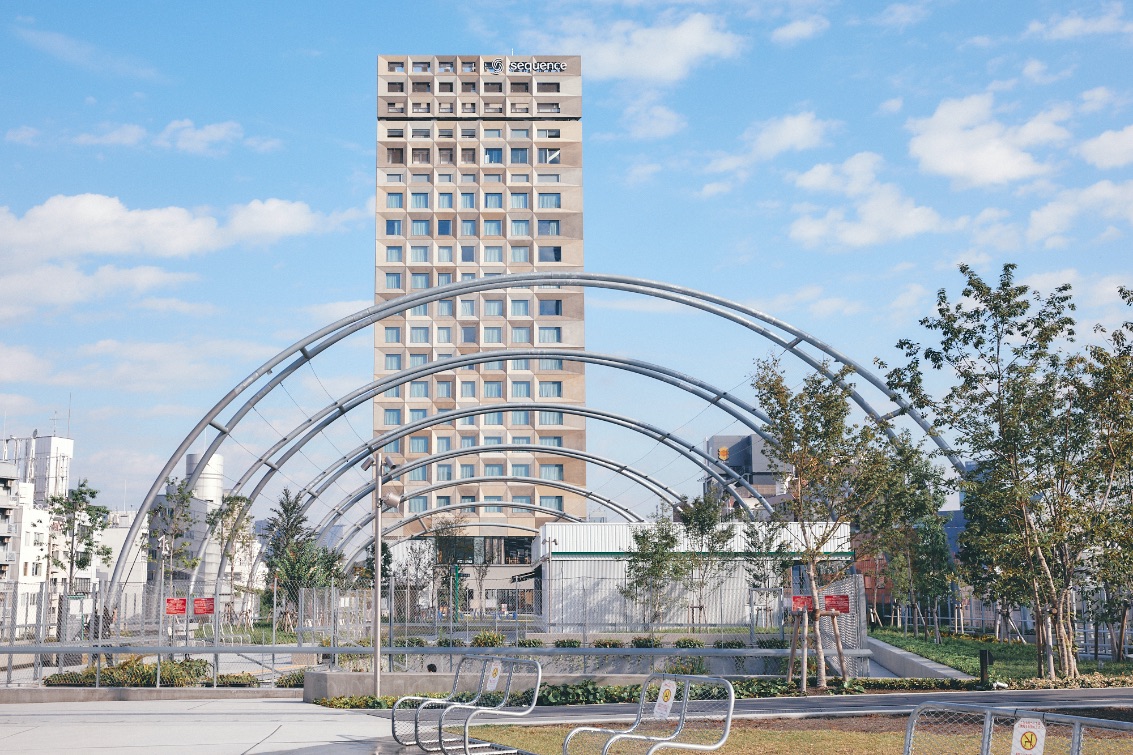 sequence MIYASHITA PARK is an 18-storey hotel that stands on the north side of MIYASHITA PARK. It can even be accessed from the complex’s fourth floor park which leads visitors to the lobby lounge. The park side of the hotel is also home to a cafe called VALLEY PARK STAND. 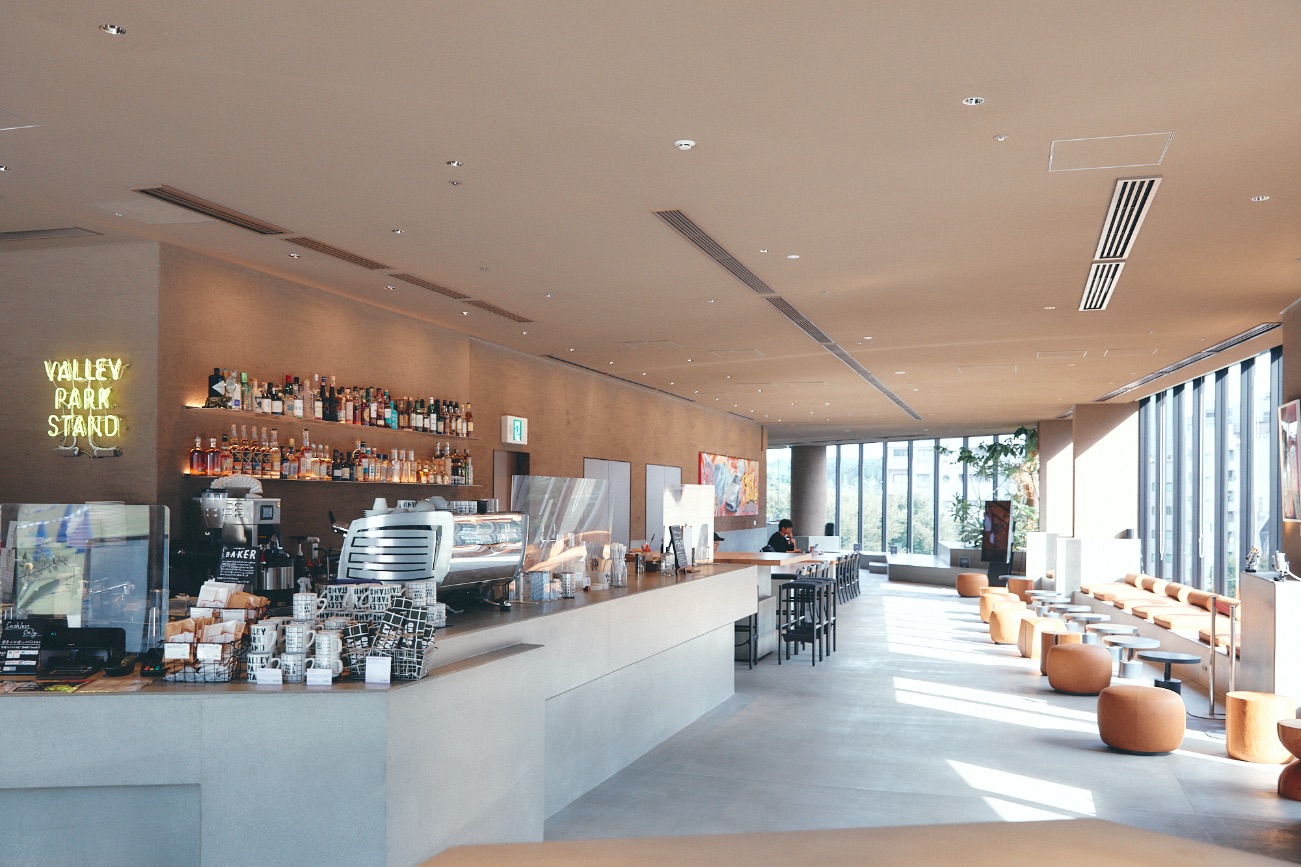 VALLEY PARK STAND can be used by non-guests at the hotel too and is open from morning to night time. The windows tower from the floor to the ceiling, allowing plenty of natural light into the cafe. There’s plenty of seating areas with table seats, sofas, and benches. 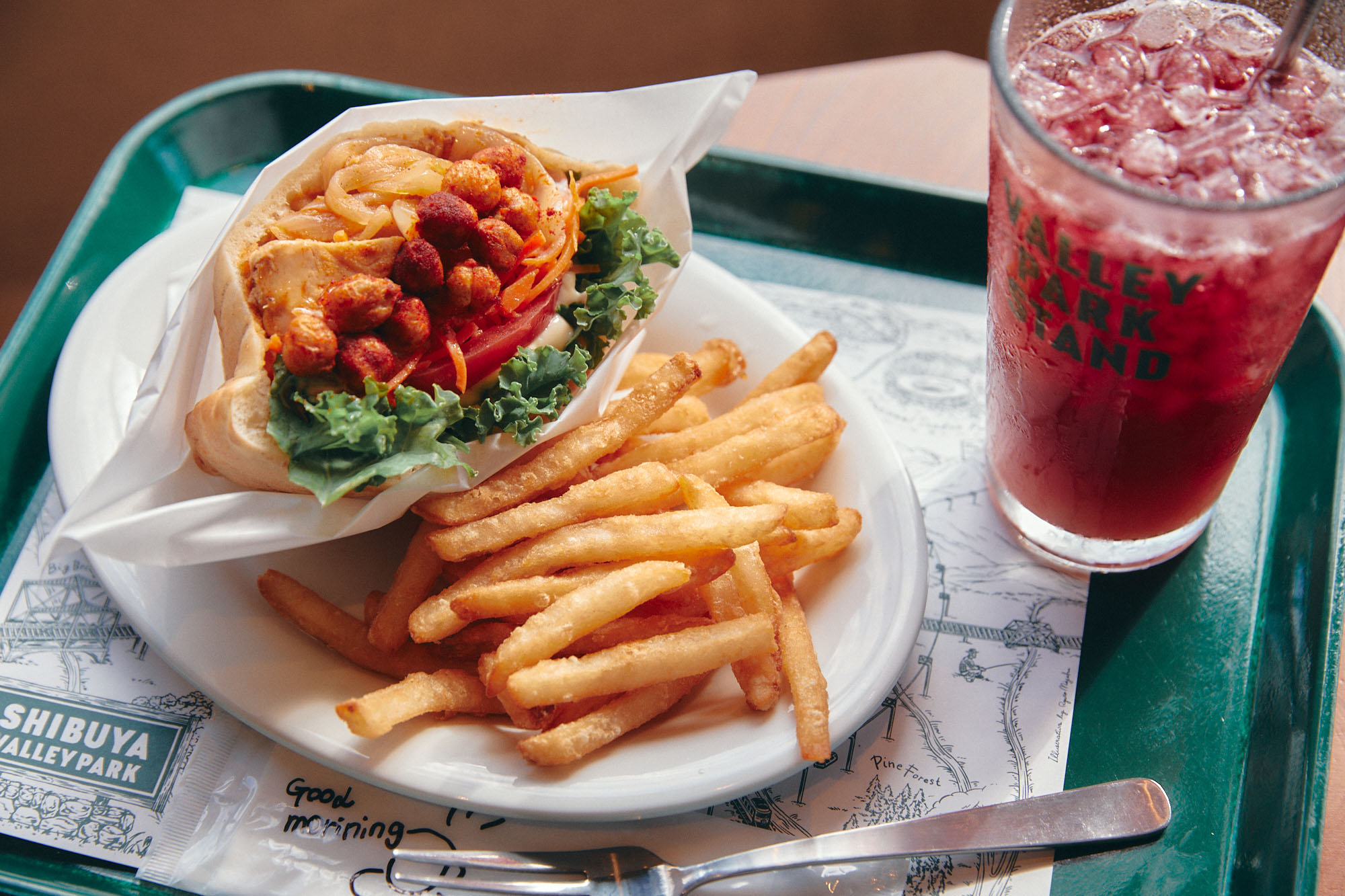 VALLEY PARK STAND is a cafe themed on a fictitious valley park, acting as one big park situated in the middle of bustling Shibuya. Adventuring through the valley park is best done with one of the cafe’s signature “MIYA PITA” pita sandwiches in hand. 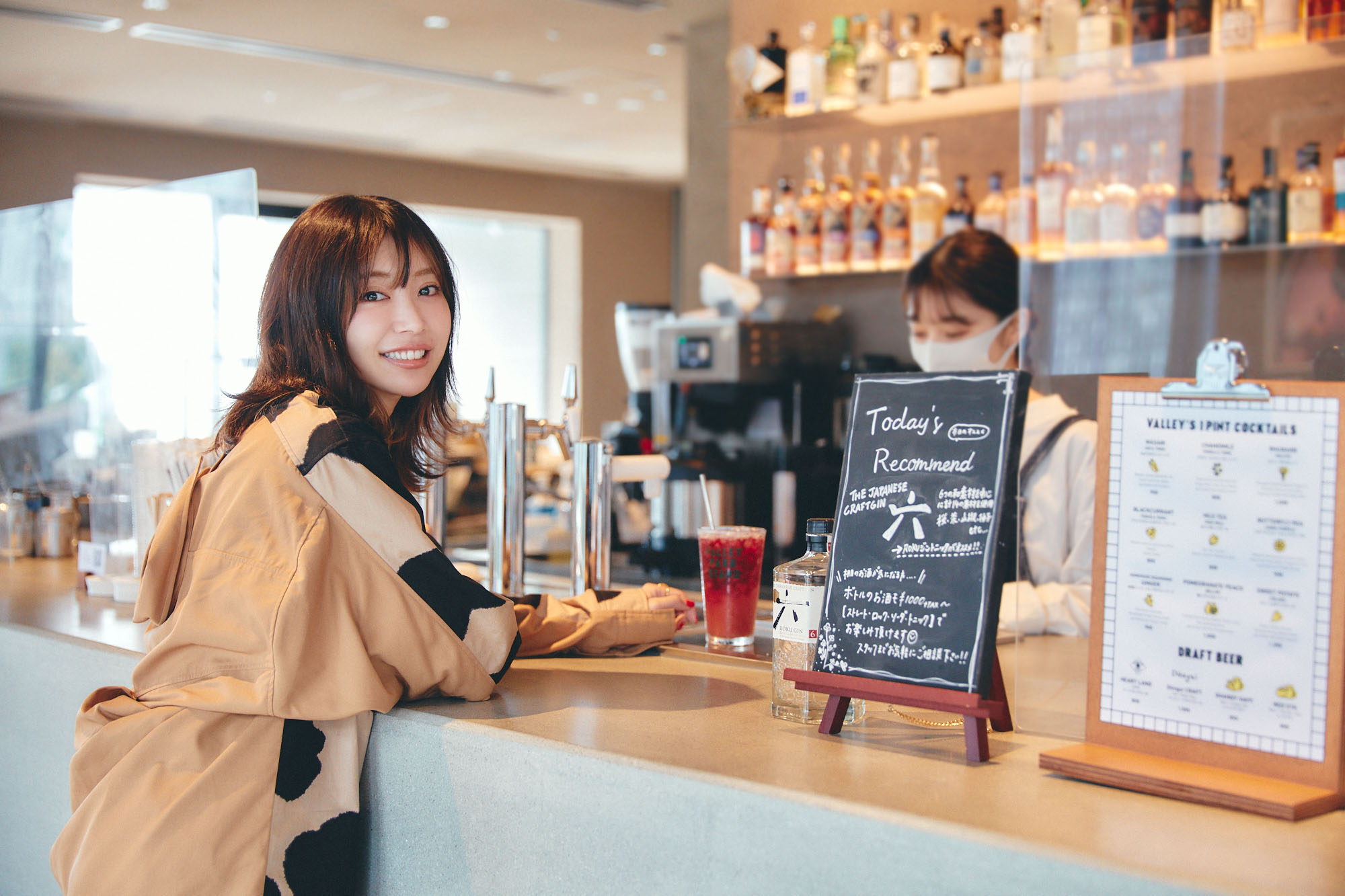 The cafe offers a selection of coffees, pastries, and pitas for lunch and breakfast. In the evenings, customers can switch to the bar to enjoy something alcoholic. Their original craft cocktails are very popular and are made by a bartender who honed their craft while working in New York.

Hinanchu ordered the “Park & Pomegranate Bellini.” Normally hotel cocktails are small, but the ones served at VALLEY PARK STAND are much more generous. 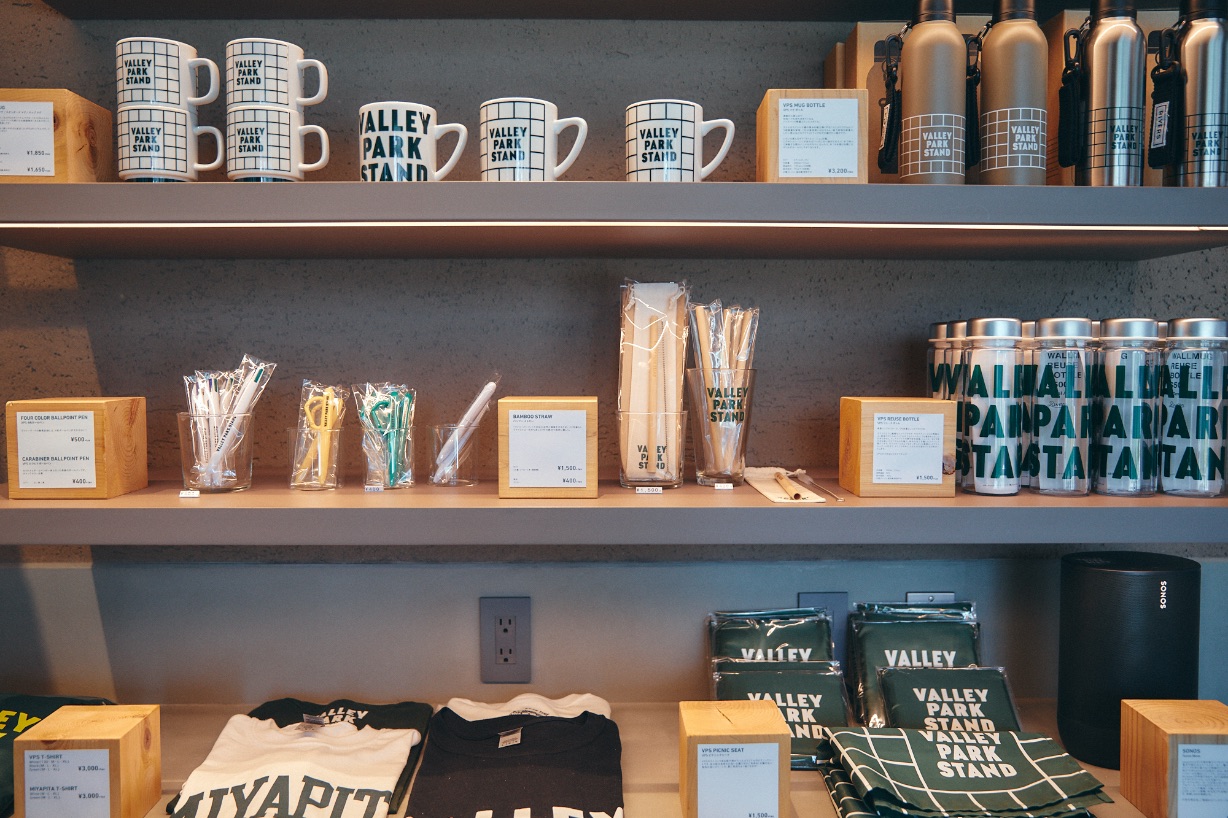 The cafe even sell their own merchandise, from mugs to tumblers and even picnic blankets so you can have a picnic in MIYASHITA PARK if the weather calls for it!

For more information about VALLEY PARK STAND, check out our full breakdown here. 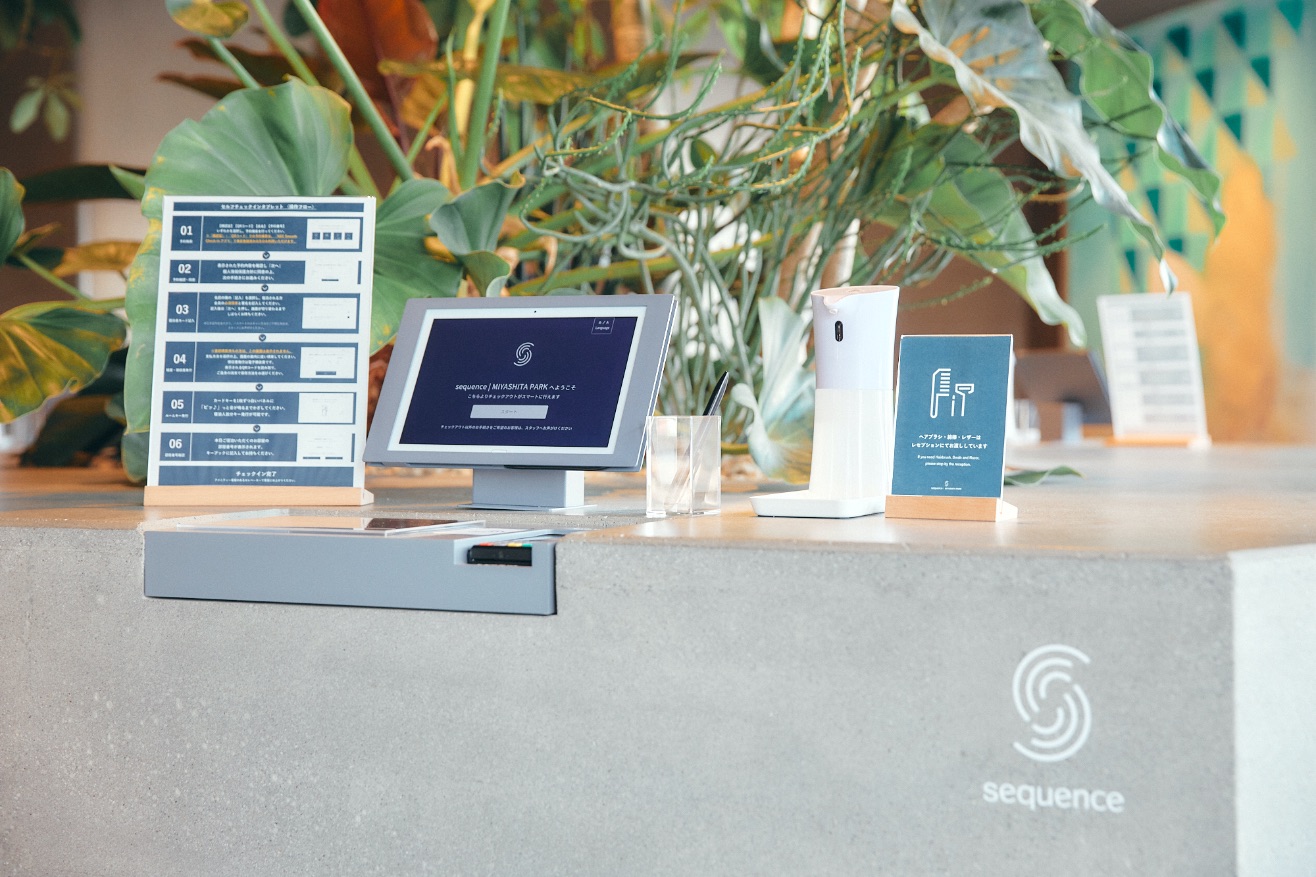 The hotel check-in lounge can be found on fourth floor, the same as VALLEY PARK STAND. Check-in uses a new unmanned self-service system so all you need to do is follow the instructions. 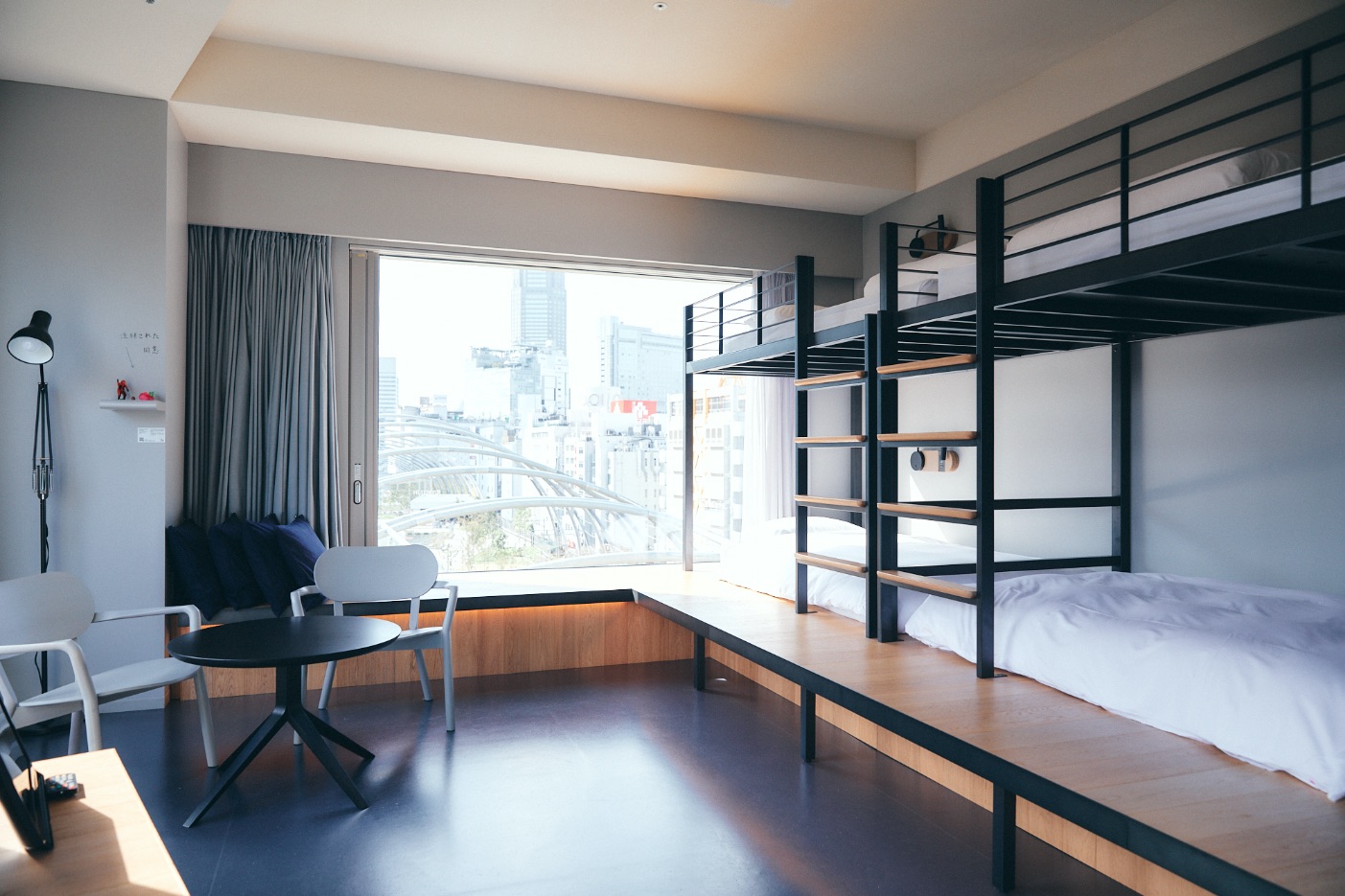 Guest rooms are simple but the furniture and fixtures are of high quality. Hinanchu stayed in the 4-person “BUNK BED 4” room. Prices vary depending on the season, but it can cost less than ¥5,000 for one person to stay in a 4-person room which is a bargain! 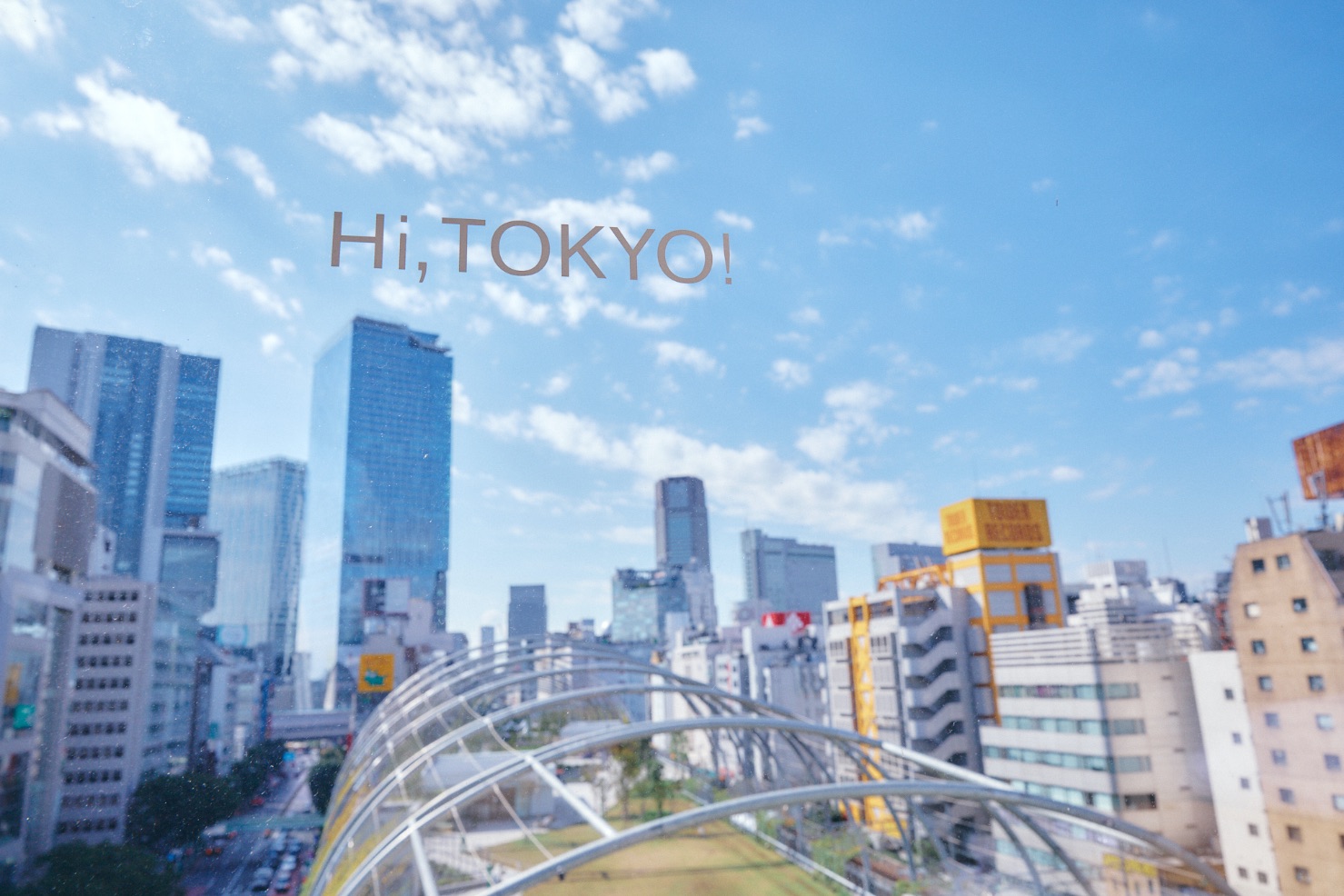 The wide windows in guest rooms look out across MIYASHITA PARK. Depending on the hotel room you’re in, you’ll also be able to see landmarks like Tokyo Tower and Tokyo Skytree. The windows also read “Hi, TOKYO!” on them which makes for the perfect photo opportunity. 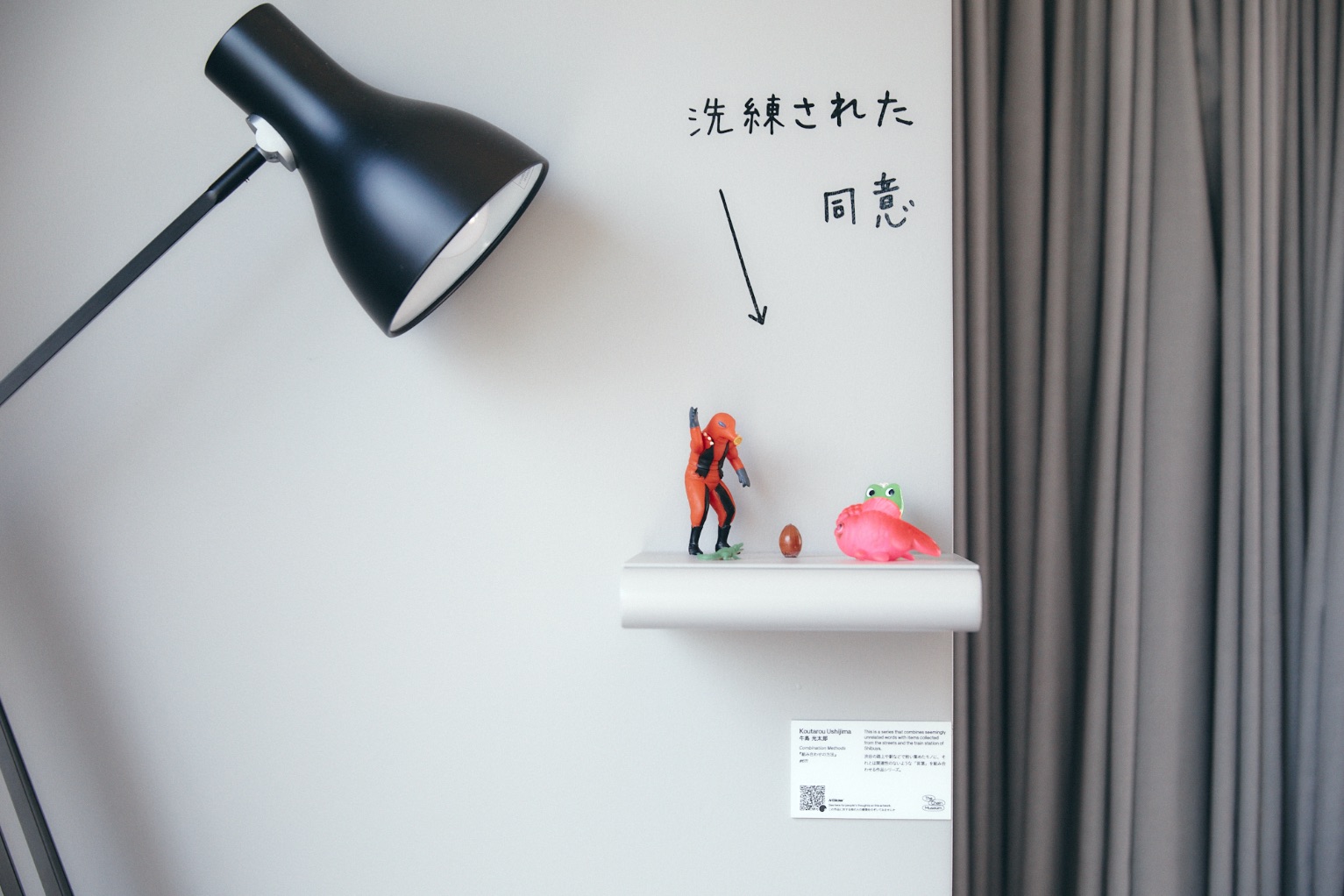 All rooms are also fitted with reading material by young authors. If you scan the QR code next to their piece, you can learn more about them and even make a donation. 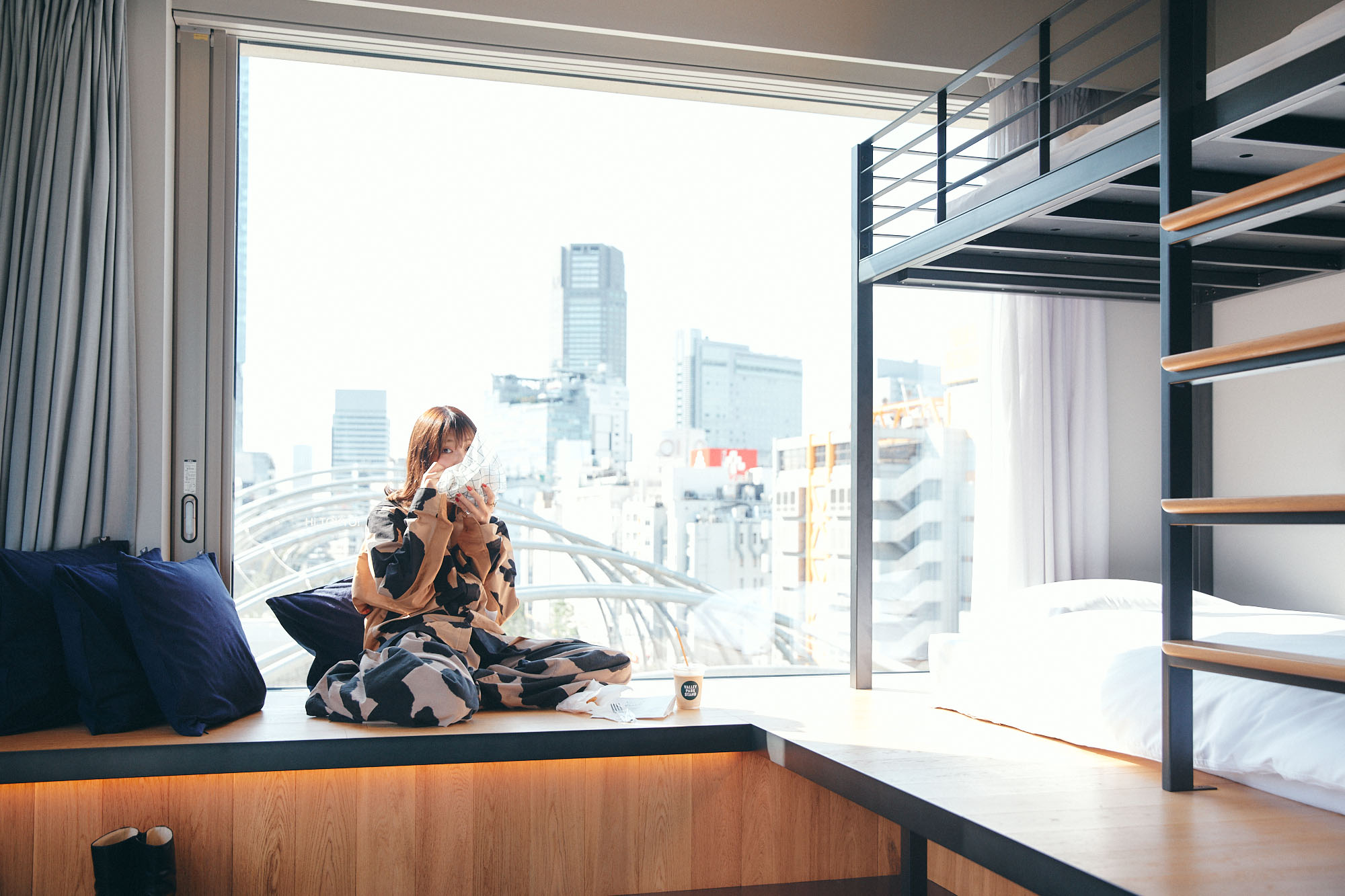 Check-in is at 17:00 and check-out is 14:00 so guests can enjoy their stay leading into the early afternoon of the next day. The MIYASHITA PARK shops open at 11:00, so after checking-out, guests can go straight to shopping or lunch.

So, how did you find MIYASHITA PARK, Hinanchu?

“I’ve always lived in Tokyo, so I never imagined I’d stay in Shibuya, but you can really feel like a queen staying here! Despite it being smack bang in the middle of Tokyo, it’s right next to the park which feels good. I definitely recommend it to those who live in rural areas that want to come and play in Tokyo since places like Shibuya and Harajuku are close by. The hotel is littered with art and stylish design, so it’s not simply a stay but a creative experience too which I think will be popular with foreigners. I want to come here again on my own for a relaxing time!” 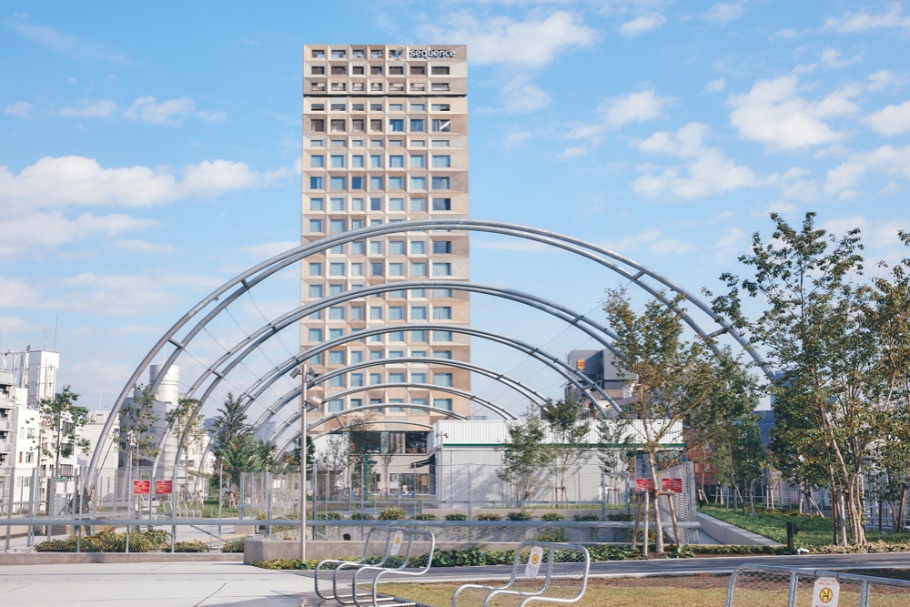 If you’re thinking of staying in Tokyo or Shibuya, be sure to look up sequence MIYASHITA PARK.

SILENT SIREN is a four-member all-female band consisting of vocalist & guitarist Sumire “Suu” Yoshida, drummer Hinako “Hinanchu” Umemura, bassist Aina “Ainyan” Yamauchi, keyboardist Yukako “Yukarun” Kurosaka. In 2015, they performed their first solo concert at Nippon Budokan, making them the fastest Japanese all-female band in history to perform there since making their major debut. In April this year, they launched their own YouTube channel called “Sai Sai Channel.” They released their 7th album mix10th on September 2, 2020. The band celebrated their 10th anniversary with a special live performance at Yamanakako Communication Plaza Kirara on September 20, 2020. For the latest information on SILENT SIREN, visit their official website here: http://silent-siren.com/