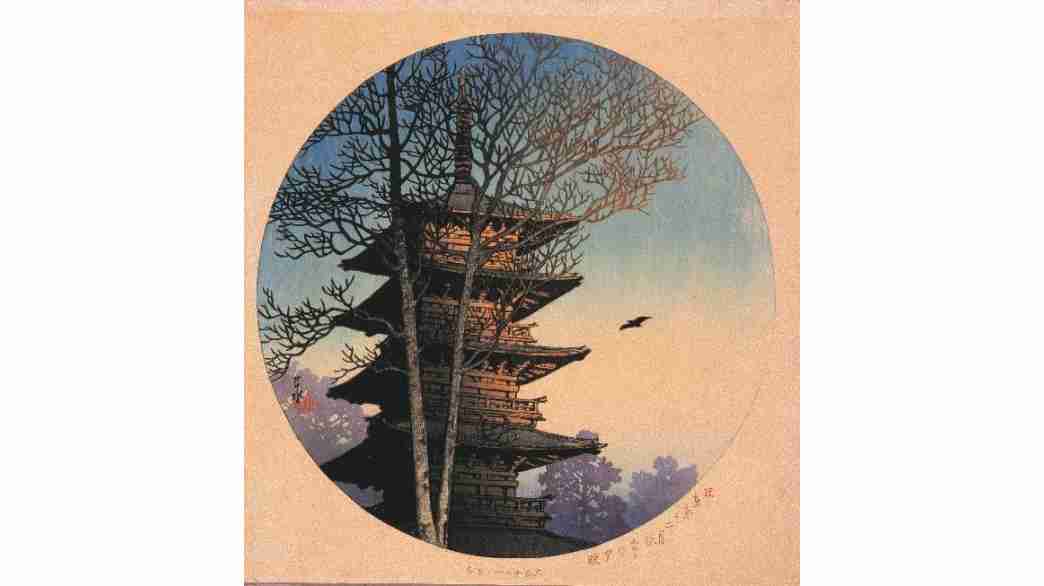 New Prints: The Evolutionary Beauty of UKIYO-E, featuring pieces from the Chiba City Museum of Art, will be held at Takashimaya Osaka from September 15-27, 2021.

Ukiyo-e, or woodblock prints, were exceptionally popular as a Japanese art style from the 17th to the 19th centuries. Now, a new exhibition coming to Osaka is highlighting the ‘Shin-hanga’ movement, which took place during the early 20th century and focused largely on the creation of pieces to sell to foreign markets. The man behind this movement was Shozaburo Watanabe, who commissioned artists to design prints blending traditional Japanese techniques with unique elements of Western paintings at the time, such as shadowing and different perspectives.

The exhibition will contain 120 works selected from the Chiba City Museum of Art’s Shin-hanga collection, ranging from early masterpieces such as Goyo Hashiguchi’s ‘Woman at her Bath,’ Ito Shinsui’s ‘Before the Mirror,’ as well as rich depictions of Japanese landscapes by Hasui Kawase and international landscapes by Hiroshi Yoshida. 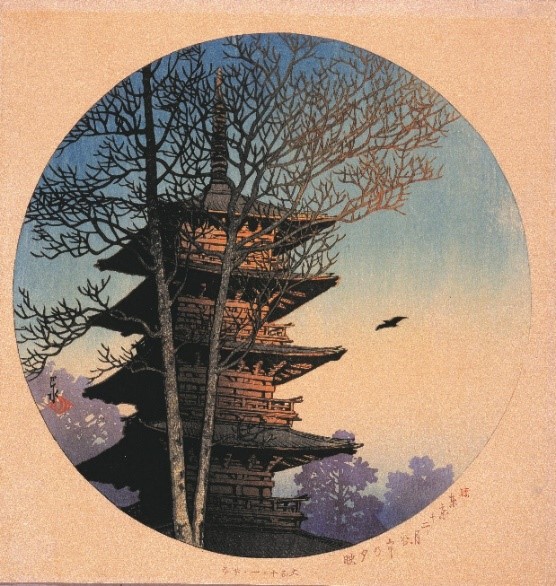 The Twelve Months in Tokyo series consists of twelve paintings based on sketches made by Kawase between December 1920 and October 1921. While twelve pieces were planned, only four circular pieces and one square piece were completed. Evening Glow at Yanaka depicts a five-story pagoda glowing faintly in the light of the setting sun. Kawase has stated that as he finished sketching the piece, he heard the sound of a bell, and for some reason, he had the uncanny feeling that he needed to straighten his collar. 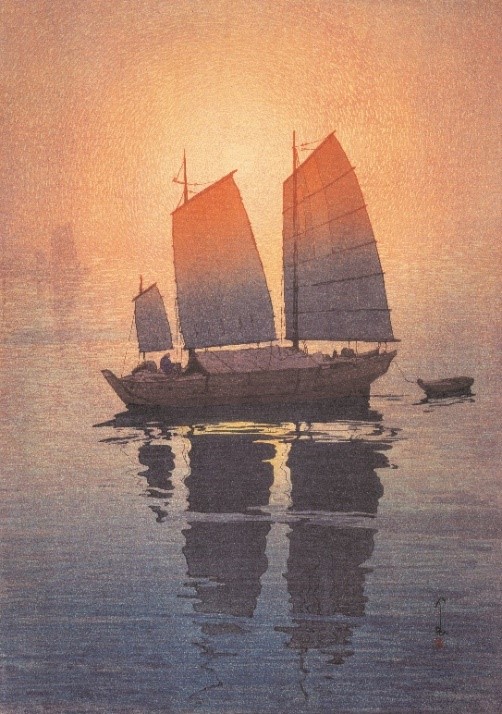 Yoshida began work on the Sailing Ship trilogy in 1921 under Shozaburo Watanabe, but all of his woodblocks and most of his works were lost in the Great Kanto Earthquake. Five years later, Yoshida decided to tackle the project again, this time deciding on six pieces. In contrast to the originals under Watanabe, these pieces tackled more nuanced periods of time and give a stronger sense of tranquility. Pay attention to the slight variations in color and light. 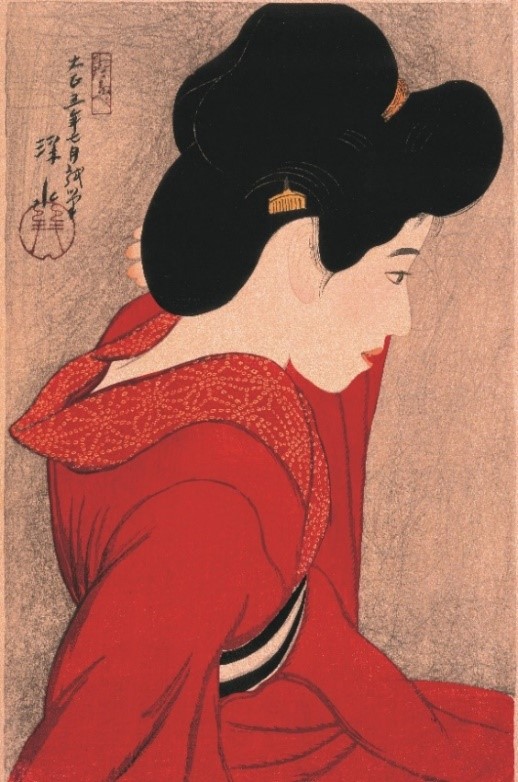 This is the first Shin-hanga work by Ito Shinsui. The piece only uses three colors: red, black, and white, and utilizes serrated carving to give the impression of shadows. Using layers of rare high-quality red paint, this work has been deemed a masterpiece by fans of the movement, conveying Shinsui’s subtlety when depicting the feminine figure. 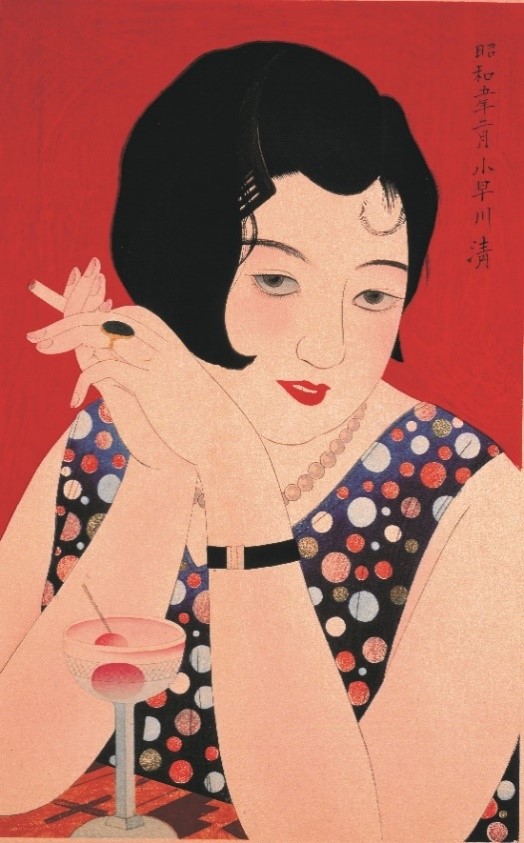 This portrait of a modern lady is one of six in the Fashions of the Modern World series by Kobayakawa, and is regarded by many as the best in the bunch. Produced between 1930 and 1931, the artist portrayed the unique personalities of women, rather than sticking to tradition. The woman in this portrait isn’t demure or quiet, but instead shows off her short hair, a cigarette, rings, and a cocktail in her hand, showing a different side to the Japanese women of the period. 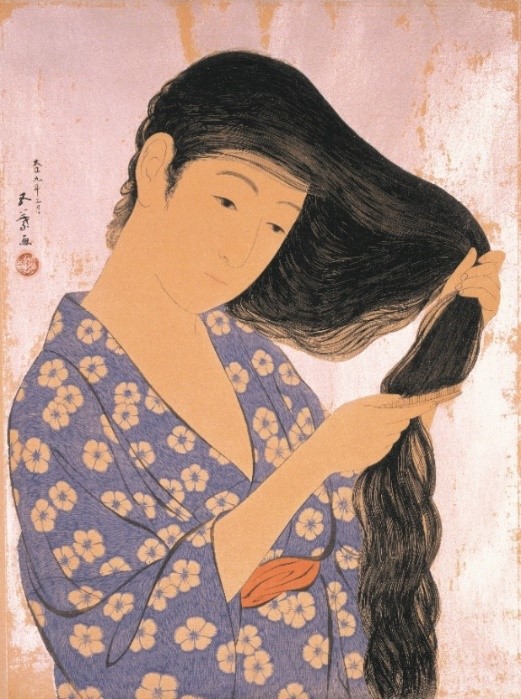 With her overflowing black hair and elegant appearance, the subject of Combing the Hair makes it clear why this is Hashiguchi’s most representative work. The woman’s name is Tomi Kodaira, and she modeled for many of the artist’s works, being discovered by him as she was modeling at a nearby art school. The pose is said to be inspired by Rossetti’s Lady Lilith, but her expression is unique to Hashiguchi and the typical style of ukiyo-e.

Installation from Chiba City Museum of Art – Shin-hanga: The Evolutionary Beauty of UKIYO-E