MOSHI MOSHI NIPPON FESTIVAL 2015 A wrap to a total of four successful events in Europe and the U.S. 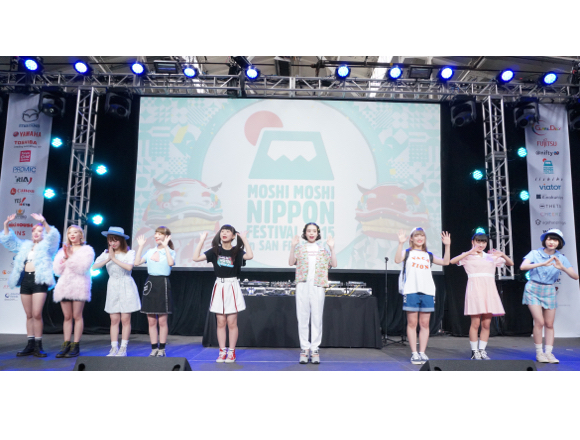 MOSHI FES first took part in “JAPAN EXPO 2015,” Europe’s largest expo exhibiting Japanese culture, in Paris, France from Jul. 2 (Thurs.) – 5 (Sun.). A “MOSHI MOSHI NIPPON area” was set up at the said event. The booth provided an all round fulfilling experience for all J-pop culture fans with kawaii products lined up for purchase, an opportunity to try out a variety of cosplay outfits, and a polaroid photo shoot/meet-and-greet with popular model, Saki Sato and POCHI, who has also been attracting attention in the J-DJ scene. The “Get your name in KANJI” also displayed popularity, where foreigners could have their names written in Kanji with a fude (writing brush). MOSHI FES made their next appearance at the London-held “HYPER JAPAN” from Jul. 10 (Fri.) – 12 (Sun.) “HYPER JAPAN” is the second largest expo exhibiting Japanese culture, following “JAPAN EXPO.” Here, we found a lot of our fans from both in and out of London having a great time at the photo shoot with Zipper model YuRi, and fans enjoying trying out a range of cosplay outfits – the booth also allowed fans to shoot polaroid pictures for free, and provided fans with MOSHI MOSHI NIPPON-selected items. Come August, “MOSHI FES” took their stage to the U.S. of A! Heading out to Magic Box located in Los Angeles, MOSHI FES took place on the weekend of Aug. 1st. We witnessed an endless wave of fans come in and out of the “Pure” booth, which displayed a collection of cosplay outfits they could try on and get pictures taken of. A fashion show took place on the mini stage with AMIAYA, Ayumi Seto, YuRi, and Hiko Achiha strutting up and down the catwalk. Fans crowded around stage to sneak a look of their favorite models. There were a total of 5,000 J-pop culture fans that gathered at the LA rendition of MOSHI FES. On Aug. 8th (Sat.) and 9th (Sun.), MOSHI FES participated in San Francisco-held “J-POP SUMMIT 2015.” The booth had a LIVE DAM stage open to anyone for a free mini karaoke session. Fans crowded the stage with eager singers anticipating their turn, creating an endless flow of people in and out of the booth. In line with the Ministry of Agriculture, Forestry, and Fisheries’ PR event, the booth provided samples of “Onigirazu (a new and creative take on the original “onigiri” rice ball) where curious foodies came to get a taste. The stage was as eventful as ever with Musubism performing their first overseas performance followed by Anna Yano and AMIAYA’s performance and finally wrapping it up with a fashion show starring Ayumi Seto and many others. Sharing an exciting look into Japan’s pop culture with a total 32,000 fans who attended the event called it for a wrap to a successful string of MOSHI FES events. “MOSHI MOSHI NIPPON FESTIVAL 2015” will be held in Singapore this September, followed by events in Paris, France and London, U.K. in October, and finally in Tokyo, Japan in November.

Ticket Information: Foreigners can enter for free upon showing their passports Japanese citizens can get their tickets from the website starting Aug. 31 (Sun):