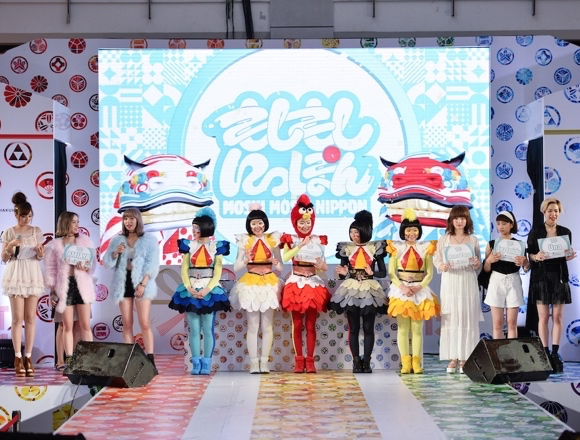 On the final day of the event, the MOSHI MOSHI NIPPON STAGE kicked off with a hair show featuring Loretta hair products. Anna Yano, Una and Ema Tanioku appeared on stage and got their hair styled by hairdressers who work at well-known salons in Bangkok. The whole audience cheered with excitement when they saw the professionals working their magic on the models. Loretta became one of the top-selling hair care brands in Japan, and also became available for purchase in Bangkok recently. This Loretta hair show offered many young locals a chance to see the products with their own eyes. The next up was Harajuku’s IT girl Una! The model-turned-singer, dressed in a denim outfit, sang three of her hit songs. She engaged with the audience between songs by chatting to them in Thai. While singing, Una asked the audience to clap their hands. They were more than happy to follow. They clapped and moved their bodies along to Una’s songs. Anna Yano was already known for her two anime songs among Thai anime fans. Some of the fans had remembered her songs from her previous Thai concert, and cheered and performed otaku dance moves! Ginyu force, a group known for their otaku dance routines, joined in the fun and danced along to Anna’s performance during Shape My Story. The MOSHI MOSHI NIPPON STAGE also featured a fashion show styled by twin models AMIAYA. Una came on stage wearing a boyish outfit in black and white, and Ema Tanioku and Anna Yano followed, wearing girly outfits. Before wrapping up the show, AMIAYA appeared on stage and walked down a runway in black and white outfits. AMIAYA stayed on stage and performed a few songs. “Let’s dance together!” to respond to AMI’s request, everyone in the audience put their hands up and danced along. The last act of the day was TEMPURA KIDZ. At the venue, there were fans who were wearing TEMPURA KIDZ merchandise T-shirts and towels. Dressed in colourful Japanese-style happi coats, they performed a total of seven songs, including Mask Mask and Donna Tokimo, and fascinated the entire audience with their snappy dance moves. They even spoke to the audience in Thai fluently and showcased what they learned in their Thai language lessons. MOSHI MOSHI NIPPON BOOTH AREA, located near the stage, offered many Japanese companies a chance to connect directly with local consumers. Many Thai fans gathered at LIVE DAM’s karaoke booth and sang their favourite J-pop songs while beauty-conscious people visited the Loretta hair booth to get their hair done by professional hairdressers. There was a photo booth area where lucky visitors got photos taken with their favourite models. Aside from aforementioned booths, there were also booths that featured anime and cosplay such as USAVICH and Pure. MOSHI MOSHI NIPPON BOOTH AREA offered Thai people a chance to experience Japanese culture in many different ways. MOSHI MOSHI NIPPON FESTIVAL 2015 will showcase J-pop culture in seven different countries and regions. They will make their next stop in Taiwan. Just like their last Bangkok show, the Taiwan show will offer fashion shows, live music and an interactive booth area!

Today, MOSHI MOSHI NIPPON PROJECT has announced the date and venue for the Singapore edition, which will take place in September. More info to follow.