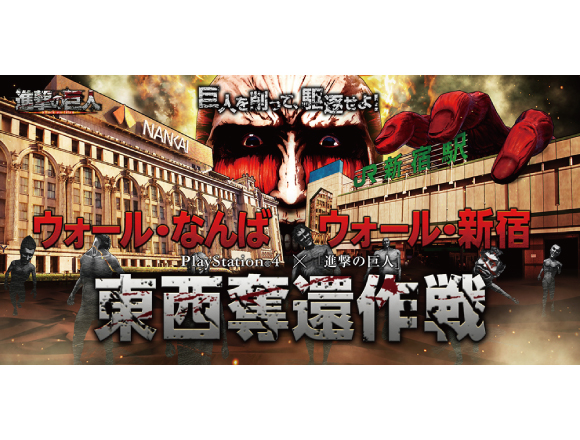 The new “Attack on Titan” game for the PS4 was released on February 18th. To celebrate its release, a 12-meter long original art scratch poster was displayed at Shinjuku station which featured 50 different titans that had to be eliminated by scratching them off the with a coin. Those that participated in “The Wall – Shinjuku Rescue Mission” were able to receive a wallpaper of the poster design.

Over 250 fans of the series gathered in front of the Shinjuku Wall in the morning, and exterminated all 50 titans in just 56 minutes! The rescue mission was a great success, with Shinjuku being restored to peace… for a brief time. The titans invaded Shinjuku once more on February 19th, and they are now advancing to Namba in Osaka. Tokyo Survey Corps vs. Osaka Survey Corps, who will be faster in eliminating the titans and restoring peace to the city?!

The “Tokyo vs. Osaka” Simultaneous Rescue Mission will begin on February 20th from 10am. The “Beast Titan” will make an appearance for this scratch poster. Soldiers who aided in the previous rescue mission may  join in the fun once more and help slay the new horde.

See the official event website below to see the poster of the titans in full force. There is also a short video that shows a short glimpse of the fun.