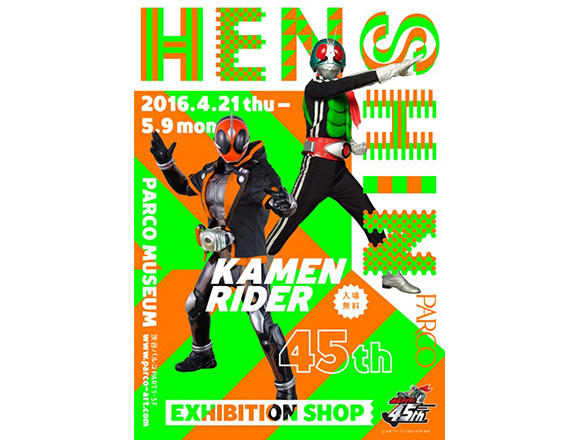 The “KAMEN RIDER 45th EXHIBITION SHOP” will be opening at the “PARCO MUSEUM” in Shibuya PARCO PART1・3F from Thursday 21st April.

Kamen Rider began airing on April 3rd, 1971. 45 years have already passed since the morphing hero grabbed the hearts of children and protected human freedom by transforming and fighting. Many Japanese people have grown up yet still long for Kamen Rider. This 45th anniversary exhibition is open for a limited period of time at Shibuya PARCO and pays homage to the series that changed the ‘hero’ genre for Japan. It will display 45 years worth of work, and special 45-year anniversary items will  be available.

People of all ages, from kids to adults who used to be kids, are invited to enjoy the series that captured the attention of a generation!