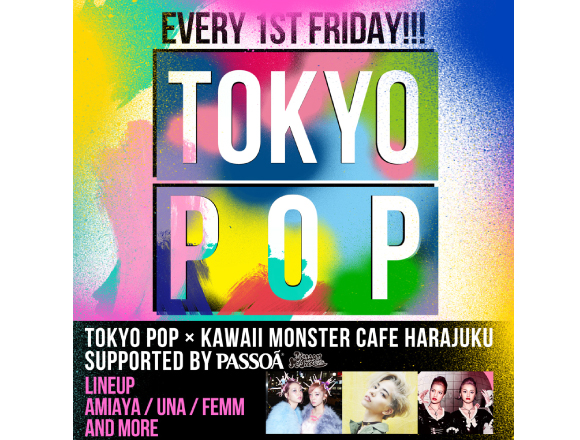 An all new event delivering Tokyo culture will be held in Harajuku at the KAWAII MONSTER CAFE on Friday April 1st.

This event was held at the SOUND MUSEUM VISION last year in June, and has people from all different kinds of countries scrambling to this event that serves as a party embodying Tokyo culture through a mixture of genres. This first Friday event will open as a regular event. A number of artists will be performing, including AMIAYA, Una, and FEMM. People active in the Tokyo fashion and music scene such as BabyMary (FALINE) will also be assembling.

See TOKYO POP for yourself by heading on over to the KAWAII MONSTER CAFE in Harajuku!

＜Cautions＞
※Those under the age of 18 are not permitted to the event.

You may not enter the venue if you fall below the age of 18. Those under the age of 20 are forbidden from buying and drinking alcohol. Upon entering, all persons will be ID checked, so please be sure you have a form of photo identification (passport, drivers license, Juki Card, Foreign Residence Card [photo copies not permitted]).

You will also be asked for ID when you purchase alcohol. Please be aware that there will be no exceptions for those not holding photo identification.