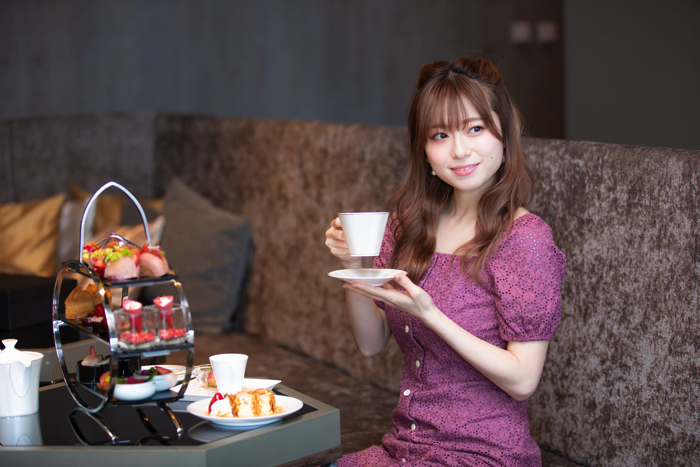 Band keyboardist Yukarun has always wanted to try having afternoon tea. To make her dream come true, she took a visit to THE GRAND LOUNGE in Ginza. 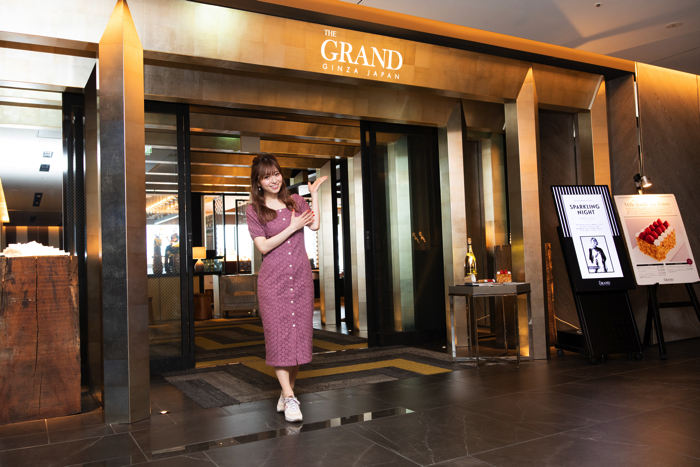 THE GRAND LOUNGE is a multipurpose lounge for adults located on the 13th floor of THE GRAND GINZA in GINZA SIX. 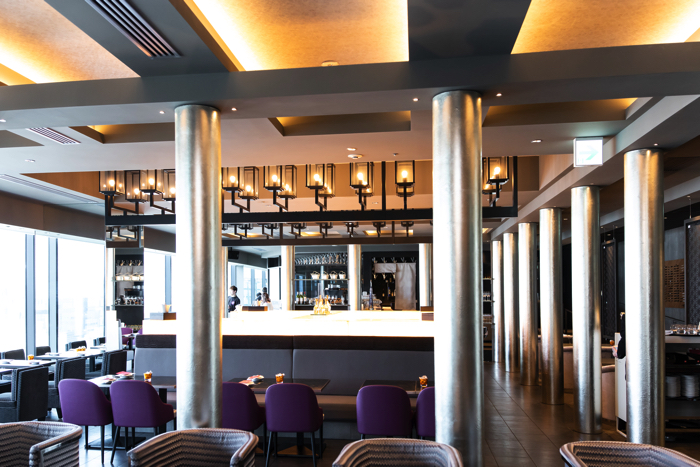 Normally in restaurants afternoon tea is often reserved just for the afternoon but at THE GRAND LOUNGE you can enjoy it any time. 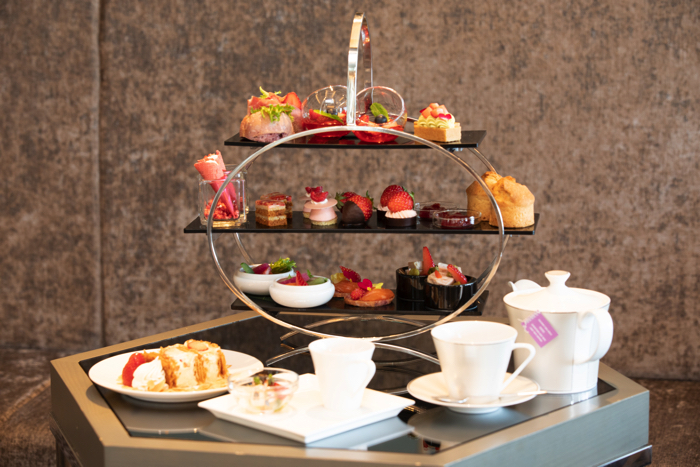 *The afternoon tea set shown above is for 2 people.

The afternoon tea set here costs ¥4,200 (before tax and service charge). It comes with 7 hors d’oeuvres, 7 sweets, strawberry mille-feuille, and a teapot with free black tea refills. Strawberries are the running theme until June, so the desserts and hors d’oeuvres are made using plenty of Japanese “tochiotome” strawberries. It’s a big tea set so can be enjoyed by couples or big eaters. 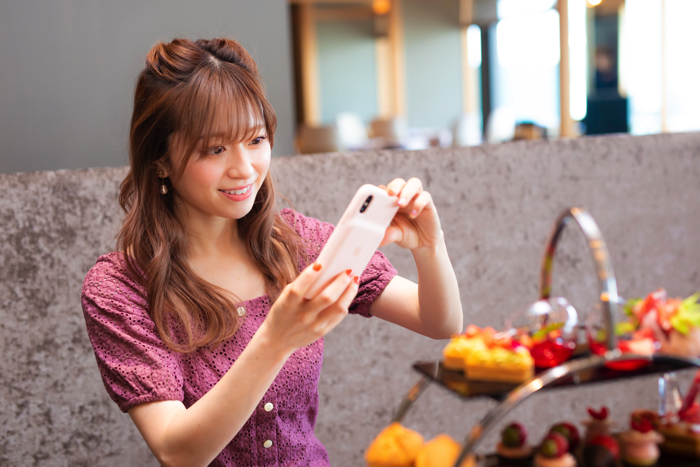 Yukarun is very pleased with the afternoon tea set so much so that she must take a photo beforehand! There are so many strawberries sweets. “I feel happy just looking at this assortment♡” she says. 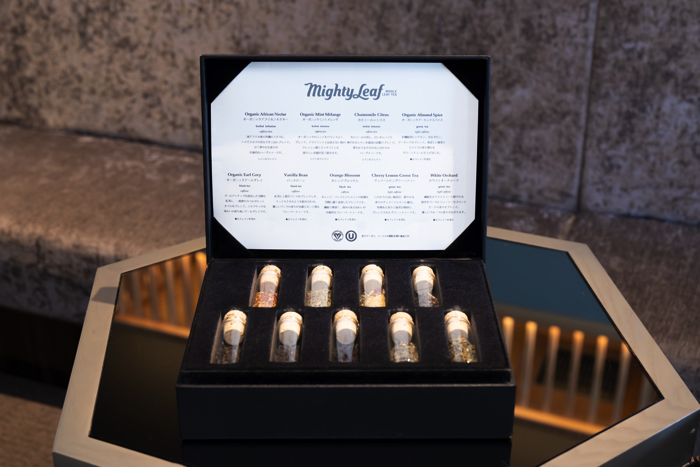 The drinks in the set are made by San Francisco-based high tea brand Mighty Leaf. There are 11 types to choose from―9 hot and 2 iced―all of which Mighty Leaf have ensured are organic with only the best herbs chosen. 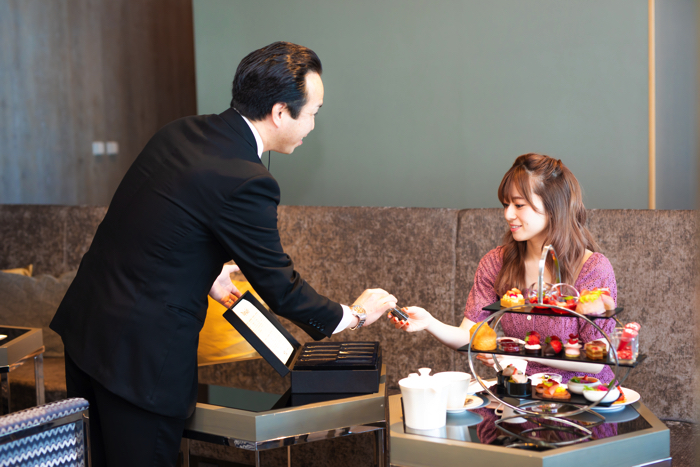 You choose your favourite by smelling the fragrant aromas of each bottle. The one most popular with Yukarun was the “White Orchard.” White tea and green tea are used as the base in this drink which are blended with melon and peach fragrance. The fact you get free refills makes it a favourable service. 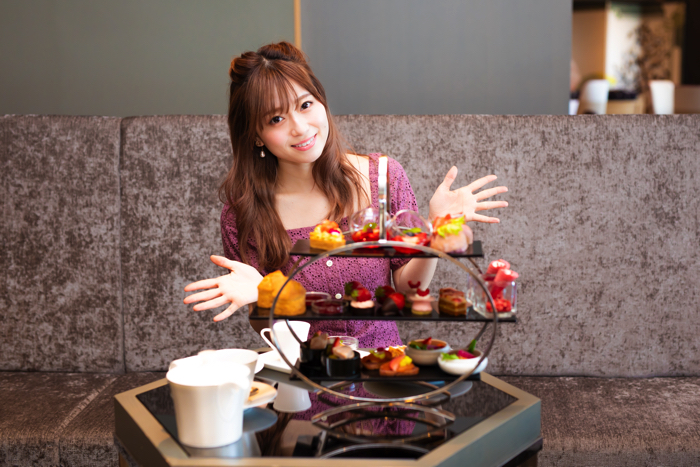 Time to tuck in! 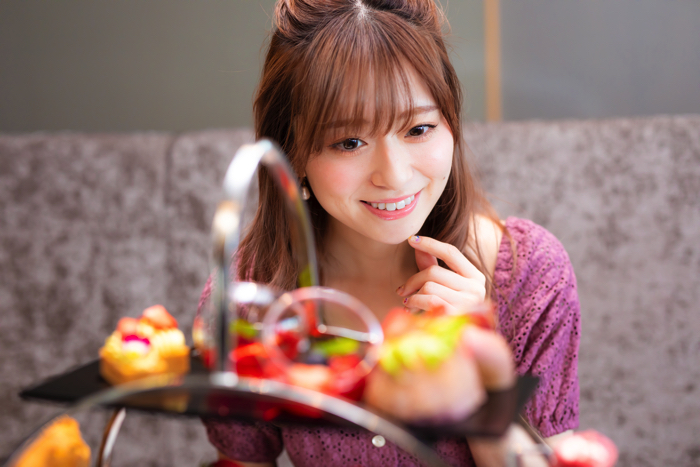 The tasty line-up will have you wondering where to even begin eating from. 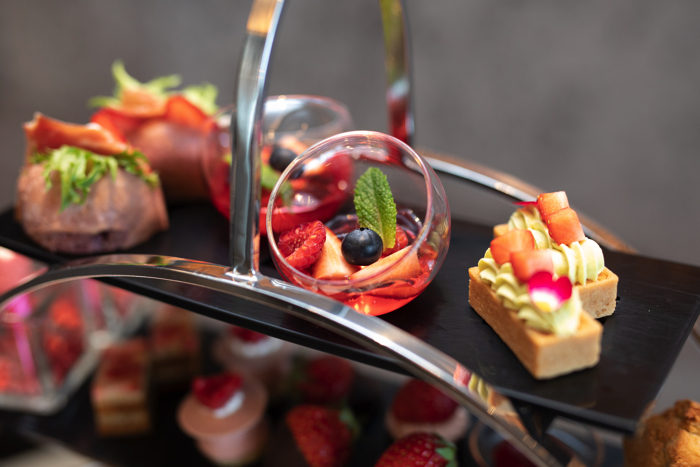 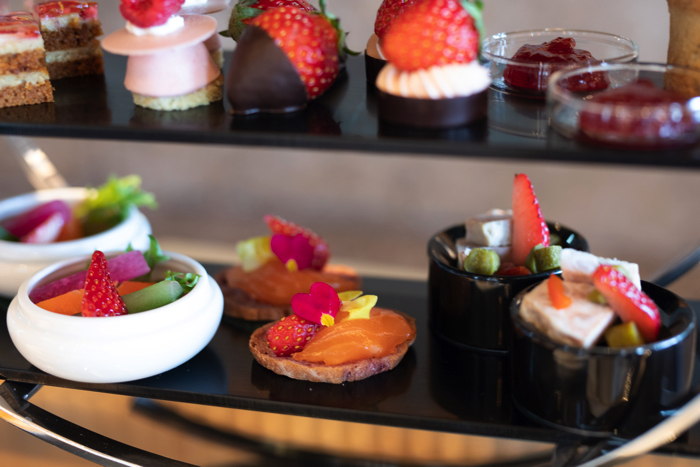 It’s not just the sweets that are piled with strawberries but the light appetisers too. These appetisers include foie gras, salmon and more―all extravagant delectables. 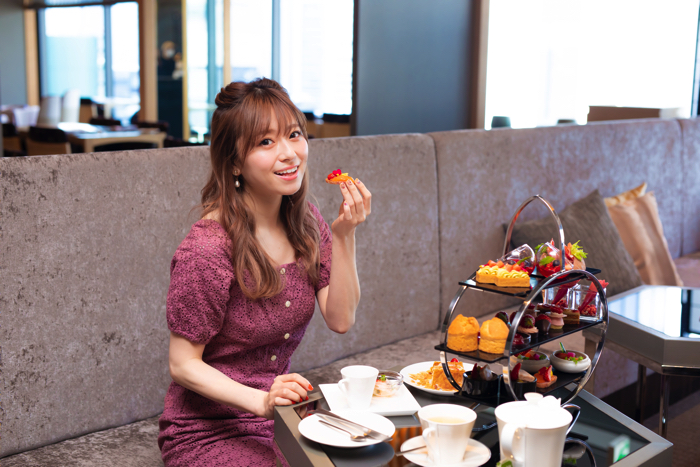 “Delicious!” says a satisfied Yukarun as she takes her first bite from the bottom row appetisers. 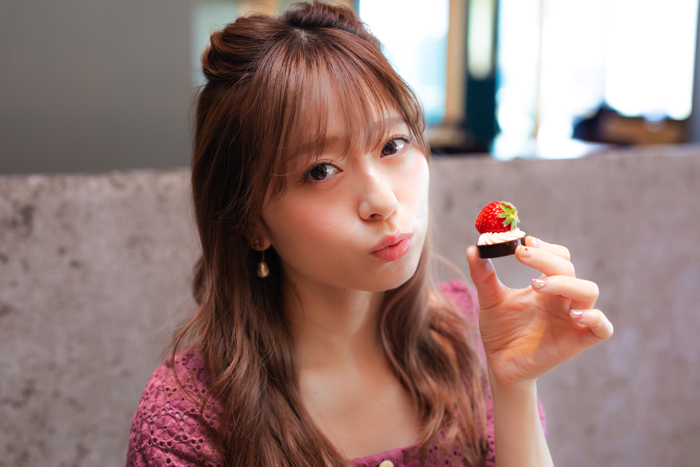 The variety of sweets is diverse, from jelly to tarts, mousse and beyond. “The sweets come in cute mini sizes! And they’re all super delicious!” comments Yukarun. 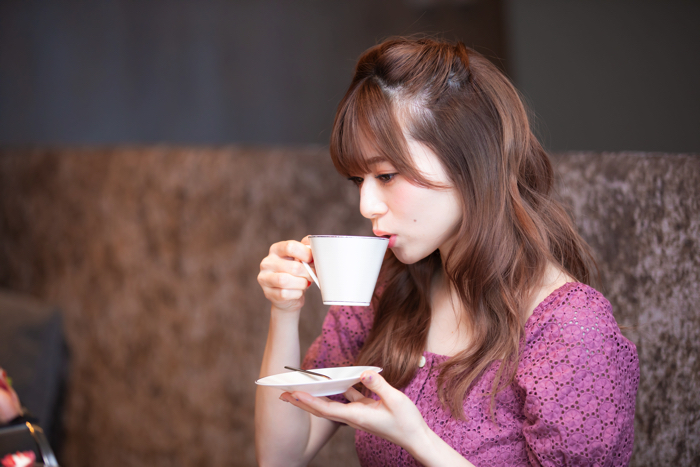 “The tea I chose is really tasty too! I don’t think I’ve ever had tea this good before!” 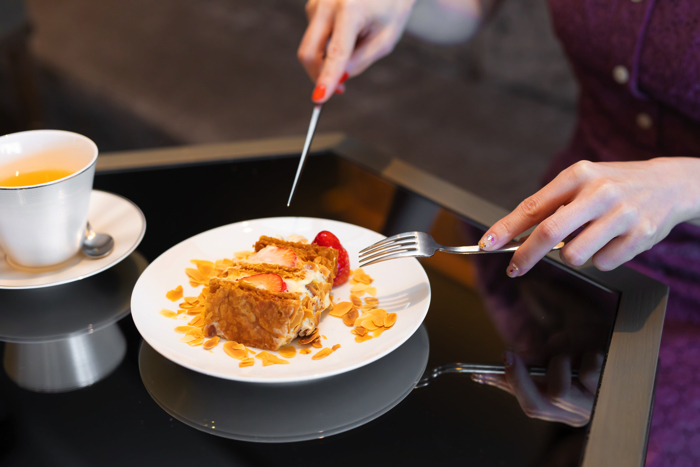 Then it was time for the crowning jewel of the afternoon tea set: the strawberry mille-feuille. It is a recreation of the legendary mille-feuille sold at Maxim’s de Paris, a much-loved French restaurant in Ginza that closed in 2015. This sandwich-like dessert takes crunchy pie and stuffs fat strawberries and custard cream between them. It’s a popular dessert ordered by itself too. The version of it that comes with the afternoon tea is half-sized. 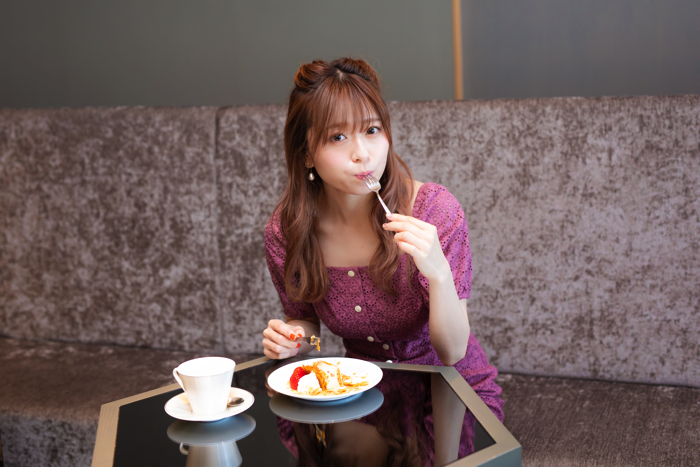 “So good! This is true happiness♡” says Yukarun who is clearly enjoying herself. The mille-feuille can also be ordered for takeout. 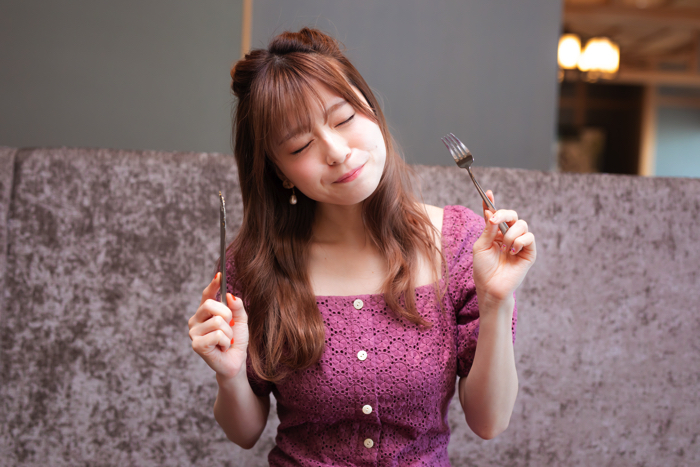 How was your first ever afternoon tea experience, Yukarun?

“It felt elegant and sophisticated being in a place like this. There are lots of bite-sized appetisers and sweets so it’s fun to try them one by one. It’s fun thinking about where to eat from too, and I was really glad you get to choose your own tea. I definitely want to come here again in my own time! I want to dress up and come with my girlfriends.” 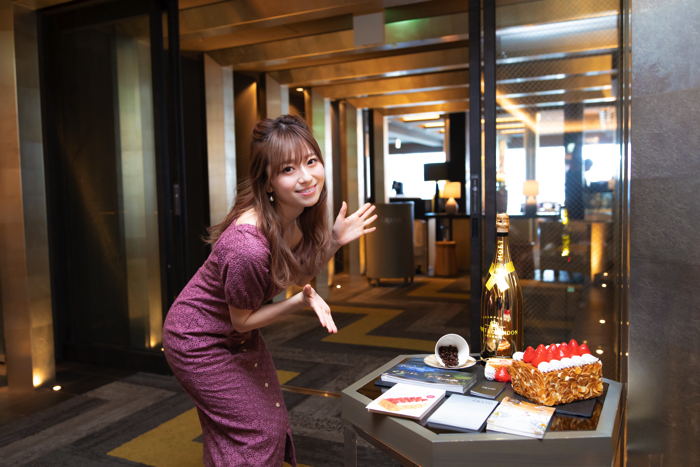 SILENT SIREN is a four-member all-female band consisting of vocalist & guitarist Sumire “Suu” Yoshida, drummer Hinako “Hinanchu” Umemura, bassist Aina “Ainyan” Yamauchi, keyboardist Yukako “Yukarun” Kurosaka. The band were founded in 2010 by Umemura and Yoshida who are former models. In 2015, they performed their first solo concert at Nippon Budokan, making them the fastest Japanese all-female band in history to perform there after their major debut. Their new album 31313 is now on sale. The band are currently on their “31313” tour in support of the album. An additional date was added to the tour which will take place on June 10 at Zepp DiverCity in Tokyo.

Check their official website for the latest details: http://silent-siren.com/

THE GRAND LOUNGE (THE GRAND GINZA)

No Fixed Holidays (Except when GINZA SIX is closed)