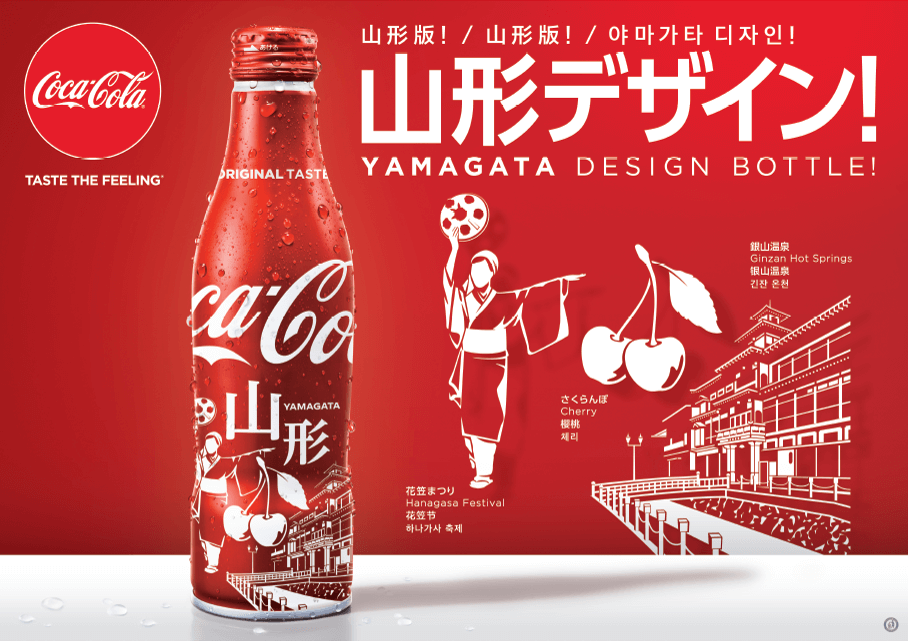 The Slim Bottle Region Design series aims to add a refreshing kick to your travels. So far, a total of 31 different designs have been released. These new Coca Colas are the perfect way to splash excitement into whatever new food you discover on your travels in the region and will also provide you with the energy boost you need on a tough day of traveling. In previous years, this stylish Coca Cola bottle has even become a very popular souvenir.

So far, designs based on regions all over the country have been featured on these bottles. Locations used so far include Hokkaido, Tohoku, Kanto, Hokushinetsu, Tokai, Kansai, Chugoku, Shikoku, Kyushu and Okinawawa. With Yamagata added to the collection, there will be a grand total of 32 different designs.

Different illustrations to represent the famous foods and culture of Yamagata prefecture cover the entire surface of the bottle. You will notice a person waving a hat decorated with safflowers on a summer night which represents the prefecture’s famous Hanagasa Festival. The illustration of the stylish streets of the Ginzan Onsen will definitely trigger nostalgic memories of the Taisho Era for many. The prefecture’s specialty ー small and sweet sakuranbo cherries ー also make an appearance on the bottle.