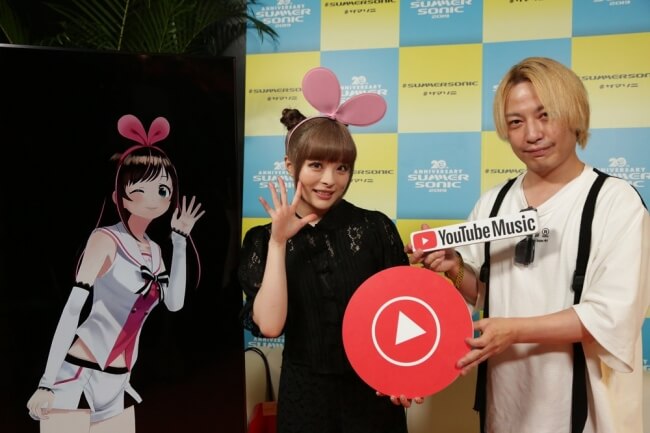 Kizuna AI recently performed at SUMMER SONIC 2019 on the RAINBOW Stage on August 18. She also interviewed various acts who performed at the music festival, including Yasutaka Nakata and Kyary Pamyu Pamyu. The full interview was posted on her YouTube channel.

Kizuna AI released a cover of Kyary Pamyu Pamyu’s song Kizunami on August 16 which is taken from Kyary’s fourth studio album Japamyu which dropped back in September 2018. To celebrate the release of the new song, Kizuna AI appeared as a surprise guest on Yasutaka Nakata and Kyary Pamyu Pamyu’s set at SUMMER SONIC 2019 where her and Kyary performed Kizunami.

Below is a translated summary of the interview.

Kizuna AI: “Our first collaboration together! Was I okay…?”

Kyary: “I haven’t collaborated with that many people. It’s rare for me to sing with someone, but I was really happy with how it went!”

Kyary: “He has a lot of out-there nicknames! [laughs]”

Yasutaka Nakata: “Battery Eater is another one [laughs]”

Kizuna AI: “What does ‘chumete‘ mean?” [Referencing a word taken from the chorus of Kizuna AI’s song AIAIAI, written and produced by Nakata]

Yasutaka Nakata: “That’s a secret! Because you can interpret it in many different ways.”

Kizuna AI: “What’s a word or occurrence [in music] that’s stuck with you the most, Kyary?”

Kyary: “Ninja Re Bang Bang. The title was originally ‘tentative.’ I feel it’s a mysterious word that anyone can get behind. Even when touring overseas everyone sings it together.”

Kizuna AI: “Finally, please give a message to your fans!”

Kyary: “It was so much fun getting to stand on stage together with Nakata. I hope we can do something together again!”

Kizuna AI: “Kyary, can you put these ears on?”

Kizuna AI has posted lots of other interviews from the festival on her YouTube channel too including with SHAED, SOFI TUKKER, Alan Walker, the telephones, and AI. Be sure to check them out.