【Tokyo Cafe】Visit the café which has an original menu that will give you great impact volume 3. Kinshicho “Kissa Knit” 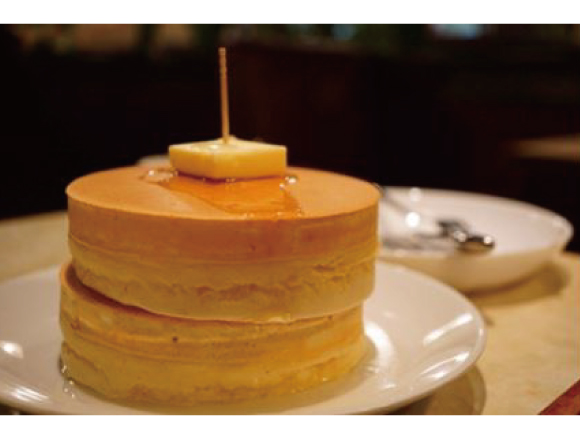 Kinshi-cho is the town which used to flourish by means of a knitting mill. Now, this town has become one of main train stations which has a lot of huge commercial facilities. When I was walking there thinking it changed a lot compared with that period, the signboard says “Kissa Knit” which glows like a fireplace came into my sight. Just at the moment I thought “it sounds so warm”, the cold wind chilled me. I open the door in excitement. The sound of a bell made me feel as if I had been transported through time to Showa period. This café was built in 1966 by the father of Tamie Ozawa who was running a knitting mill. “Kissa Knit” was born since they wanted to maintain the name of knitting at least. The first few years after they opened this café, they only served several light meal menus, but now there are so many menus such as barbeque set and Kani zosui (crab hotpot and rice porridge) that you don’t usually see at this kind of café. Mrs. Tamie said “it is only because our regular customers said they wanted to eat porridge since a big hospital has opened close by.” I can totally tell why this place has been loved by regular customers. The special “Hot cake (750yen and includes a soft drink)” with a toothpick sticking through butter on top is the trade mark. Two pancakes that are cooked a in copper plate are about five centimeter’s thick. You pour syrup on the top of butter which was melts with the heat. When I cut it with a knife, I was surprised by the crispy surface. The thick and heavy pancake is fluffy when I brought it into my mouth. I was fascinated with that gap. The recommended foods are decorated in the showcase at the entrance.

These plastic food models have been sitting in the entrance of this restaurant for about fifty years. The fact that these models colors are fading tells me that this “Kissa knit” has been passed down by the passed father, to his daughter, to her grandkids and to their grand-grand kids. Currently, three generations are in charge of this business. All the waiters and waitresses are wearing bordeaux-colored knit vests. Their uniform reminds me of the period of time of knitting mills. This cold time of the year makes me want to be visit “Kissa knit.”

*All prices are tax-included

*Set menus comes with either coffee, tea, milk, or kombu-cha

■Related article：【TokyoCafe】Visiting Japanese Coffee shop where you can encounter the foods which give you great impact. Vol.1