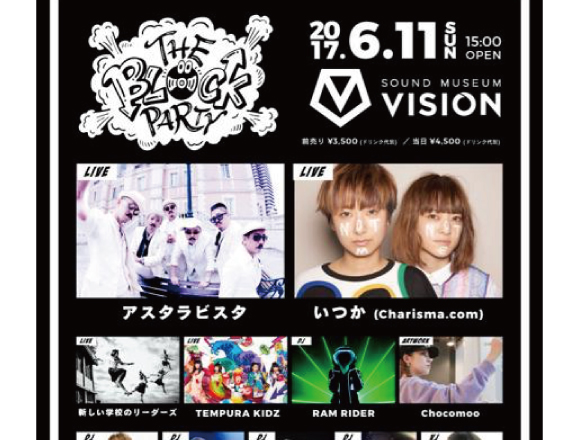 TEMPURA KIDZ have invited another fantastic line-up of guests to join them for their next event. For Vol. 2, expect to see HASTA LA VISTA, a group made up of, what would be no exaggeration to say, influential artists; MC Itsuka from Charisma.com, who has done collaborations with TEMPURA KIDZ, so much so that it would be safe to say she is almost like their older sister; “Atarashii Gakkou no Leaders,” who performed the main theme song for the hit TV drama “Joshu Seven” and who made a successful major debut. Dance performances will be making a return for the new block party too, following up from the first. Artists who will be dancing include “Pirates of Macho Bean,” whose performance you will never forget, with his incredible skill and vivid personality. A host of other artists in the dance scene will also be hitting the stage such as “Dr. SWAG,” “ASUPI,” “amane” and more, all of whom are young artists paving the way for the next generation and all whose performances you must not miss. The members of TEMPURA KIDZ will also be holding a project entitled “Joshi Ryoku Koujou Kikaku” for girls – 50 lucky attendees who are girls will receive body bath oil by Beaute de Sae. And make sure you don’t miss out on some exclusive kawaii goods by Choco moo who created designs just for THE BLOCK PARTY!

A little under one month left until THE BLOCK PARTY Vol. 2 begins. Tickets are now on sale and selling fast, so make sure to reserve yours ASAP!

Related article：Charisma.com, The tour final was finished in a great success with TEMPURA KIDZ & Calmera