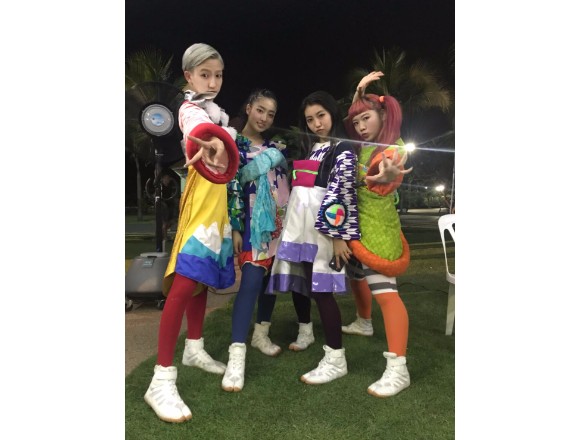 We recently went to Si Racha in Thailand to perform at the Sriracha Japan Festival! I have had the change to go to Bangkok many times, but this is only the second time I have been to Si Racha. I came to this event 2 years ago too!

Si Racha is different from Bangkok. It’s rich in natural beauty and its tranquil atmosphere makes it a very pleasant place indeed!

This time around it had a fully-fledged Japanese festival vibe to it because of the Japan Festival!

When you think of festivals, you think of all the different stalls there – and there were plenty of them at this festival! Of course, they were selling Japanese food, like okonomiyaki and yakisoba. They also had candy floss and more, it felt like summer again! At the center of the festival was a yagura (tower). There was also a torii (shrine archway) and thunder gate too. It was just like being in Japan! We also wore our Japanese style clothes for the occasion and performed live! It felt like the perfect song for the event. Everybody had their hands in the air and sang along.

We were also taken to a Japanese restaurant in Si Racha!

They had the standard sushi and California rolls! The flavour was different from that in Japan – it was super tasty! We were able to feel lots of Japan during this trip to Si Racha.

I’m very happy that I was able to experience Japanese culture, festival and food somewhere else in the world!

The seafood in Si Racha is very fresh and extra delicious, and it’s richly endowed with nature. I’m happy I was able to discover so many wonderful places!