People Around the World Cheer for MOSHI COOL on Day 3 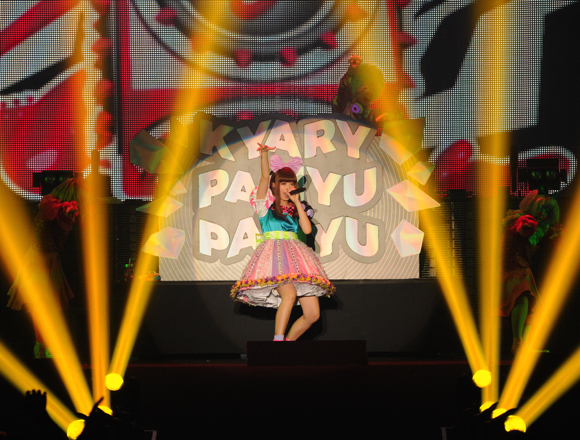 Day 3 of MOSHI MOSHI NIPPON FESTIVAL 2015 in TOKYO took place on Nov 8. Despite the cold weather, a large number of concertgoers travelled to Tokyo National Gymnasium to catch the live performance from Japan’s cutting edgy artists. MOSHI MOSHI STAGE started with Kireek’s collaboration set with a group of professional Japanese traditional dancers. By combining Shamisen (a traditional Japanese three-string instrument) and nostalgic game sounds, the duo played a number of catchy tunes, and got the audience dancing on their feet. One of the most sough-after DJs, banvox came on stage, and rocked the crowd with his big house and future bass-oriented EDM set. His world-renowned DJ prowess got the loud cheers from excited fans. Many of the audience were dancing so hard, and it was like they were dazzled by this young man’s charm. Meanwhile at NIPPON STAGE, a total of six artists were showcasing their artistry as part of ~TOKYO POP~. After Lucas Valentine grabbed the attention of the whole venue with his DJ set, and color-code fascinated them with their snappy moves, twin models AMIAYA joined the stage and covered Pink Lady’s well-known tune in a cuter way. The mood quickly changed when CREAM grabbed a mic and showered the crowd with their well-known hip-hop tunes. Color-code pulled the whole audience together by asking fans to put their hands up in the air. CREAM came back on stage and sang ShooingStar. Later at the same stage, Charisma.com and Suiyobi no Campanella got the crowd cheering. The hall was packed the most during the performance of Charisma.com. The group consisting two full-time office workers and part-time artists took the entire audience to their own world by rapping along to their well-known aggressive tunes. They were also fun to watch between songs thanks to their acclaimed talk skills, prompting laughter while also urging the crowd to respond louder to build up the excitement . “Whether you are on a vacation or have work tomorrow, I want you to enjoy this moment with us now!”After the shout, they surprised the audience once again by performing Miira Killer with TEMPURA KIDZ. On the other hand, Suiyobi no Campanella enjoyed talking to fans in a more casual and personal way. Donning a gorgeous red dress, she got the audience entertained throughout the set with her unpredictable performance, which also included a quick practice of few phrases from her last song before moving onto the performance. At night, the outside area was lit with hundreds of lanterns. Nihon Konamon Association area got a lot of attention and was crowded with both locals and tourists enjoying Osaka’s delicious soul food such as takoyaki and yakisoba. We also spotted a heartwarming moment of festival staff and tourists exchanging smiles when they were sorting out their garbage. By the time we went back inside, suited dance group WORLD ORDER was working the crowd. Their synched performance took the audience’s breath away. They also introduced themselves in fluent English and enjoyed engaging with fans. The three-day event was coming to an end in a few hours. But the audience was not ready to end this party, and the venue got more crowded toward the end! First up was m-flo, who started their set with their hit single miss you. The familiar sound took the whole audience to a nostalgic world. The set was also joined by Crystal Kay and MINAMI (CREAM), and their beautiful voices echoed through the venue. The energy level went up even higher when CAPSULE appeared on stage. After a joint performance with VERBAL (m-flo), the duo ran through a number of hit singles, including JUMPER. Toshiko Koshijima called out “I know you can do more!”and provoked the enthusiasm of the crowd before finishing their set on a high note with their lovely love song Starry Sky. The last act of the night was Kyary Pamyu Pamyu. Her set was filled with so much kawaii and excitement! It was almost like someone flipped over a massive toy box above us! “Wow, there are so many people coming from overseas! How are you, everyone?” Kyary asked the audience, and then gave a quick lecture on Ninjari Bang Bang.

The J-pop princess got the whole audience singing during Tsukema Tsukeru, and performed the latest song Crazy Party Night ~Pumpkin no Gekishu~, in falling golden and silver confetti, before wrapping up the festival. MOSHI MOSHI NIPPON PROJECT ‘s world tour came to an end but their challenge will not stop as long as Japanese culture continues to evolve. Stay tuned for more exciting news from this wonderful project, and keep learning all kinds of ever-evolving Japanese culture!

Next » MMN Festival 2018: Report by Scarlet, a Japan-loving Brit