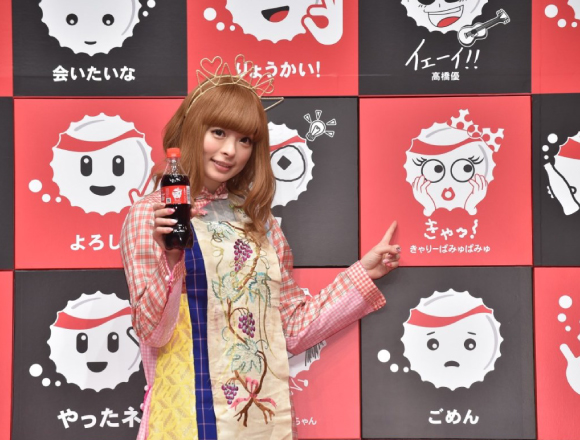 Helping ‘sensitive to the times’ and ‘edgy’, unique artists aiming to not only spread their music across Japan but also overseas, the sublabel unBORDE of Warner Music Japan was established on 21st December 2010.

With the powerful unBORDE X Coca-Cola collaboration tag, a variety of 5 year commemoration projects have been established and put into action, such as a record label festival and the 12 artist super-group ‘unBORDE all stars’ collaboration song. Besides this, there is a lot more being planned and developed! The commercial shows Kyary facing difficulty during a performance rehearsal, where she attempts to twirl a stick for a dance routine but drops it numerous times. As the commercial uses Kyary’s new 5-year commemoration song ‘Sai & Ko’ (available for purchase from 20th April), a link was made between the commercial storyline and the lyrics of the song. Gratitude for continuous loyal support from fans runs through the commercial as its main message.

Fans have more to look forward to with Kyary’s own collaboration Coca-Cola stamp ‘Kya!’ (きゃっ). The design features a face with pronounced fake eyelashes, with a cute ‘little girl’ vibe. The significance behind this stamp is to express that there are times when people cannot face reality or have to face something unexpected, and so it is often the case that people hide away their true feelings and become shy, closing themselves off. However, this stamp’s hidden meaning is to maintain your cuteness and be able to let your thoughts and feelings flow ー don’t hold back your words and most of all, let everything go and have fun!

Additionally, as this is the debut 5th year commemoration, a stamp message expressing gratitude for all the fans and staff members who have been part of the support community for the past 5 years, and hoping to strengthen further their continuous relationship with supporters into the future, has also been made.

Yasutaka Nakata (CAPSULE), who arranged unBORDE’s 5th year commemoration song and lyricist PES (RIP SLYME) will also make an appearance at the commemoration event. Drinking Coca-Cola on a normal day and then, for an instant, filling yourself with a special feeling is a unique concept which made the foundations for the ‘Taste the Feeling’ campaign. This message makes the inspiration for the song ‘Feel’ and the combination with the 12 artists joining forces to sing together makes it that bit more special.

“Using the key phrase ‘Taste the Feeling’ as the core of the song, I established the centre focus of the lyrics for PES. At the end of the song ‘Feel’, the unBORDE super group members were allowed to each sing as they pleased, along with background chat added towards the end of the song. It was at this point in the song that I couldn’t have been more pleased about making this musical piece. The great feeling of accomplishment was overflowing — to know that everyone who took part really enjoyed themselves. I think that this song really relayed the great feelings of enjoyment that everybody was feeling, too” explained Yasutaka Nakata.

When asked “at what times or on what occasions would you like to listen to this song?” PES replied “As this song uses Coca-Cola as its main symbol, creating the imagery of fun times and happiness, I would listen to it when the atmosphere is lively and bursting with excitement, such as at a party. However, Yasutaka Nakata had a different answer; “When I’m feeling down, I would listen to this song. Listening to the happiness and joyfulness reflected in this song will be enough to pick up my feelings when they are down. Even when the song is finished, I want people to say “I wanna hear it again!” because that would make me really happy.”