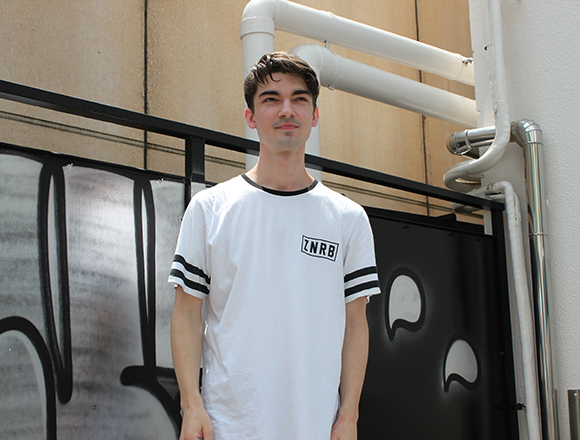 Though laserdisc is a technology that is no longer remembered, it only seems to be getting better for this DJ duo that runs by the same name, despite several letter alterations. It’s Monday in Japan, and one half of Lazerdisk, Chad, and his girlfriend Sara had just landed at 2am on the same day. Though Zack was also supposed to be present, he was nowhere to be found in the room where we conducted our interview, which I soon found out was due to poor weather conditions that made him miss two flights at LAX. Although Zack was definitely missed for the interview, Chad was more than ready to speak for the two!

What happens when it’s your first trip to Japan and you absolutely adore the place? Chad’s the guy you want to open your ears wide for — read and find out more about Lazerdisk ahead of their show this Saturday while Chad reveals his tucked away passions about Japan that was triggered by an obsession for DDR. Thanks for sitting down with us! Please introduce yourself to our readers on MOSHI MOSHI NIPPON for those who are new to you!

Chad: I’m Chad, one half of Lazerdisk from a DJ duo with Zack Johnson who isn’t here right now, but he’s trying and giving it his best.

If you were to describe yourself in an emoji what would you choose?

Sara: Take out your phone.

Chad: I should just check.

Chad: Yeah, whatever my most recent one is. Like most used. Let’s see. The most frequent one is the heart with the arrow going through. ?

Yeah, I guess so, I’m not kidding.

So you’ve got a lot of love in your life!

That’d be cool if that was your frequently used emoji.

Yeah, the dragon is underused. ? Tell us how you two met and how you got your name.

Me and Zack met in Burlington, Vermont, which is a small, little town in the Northeastern US. We created the name actually as a joke, because we didn’t know if it was going to work, and laserdisc is a failed technology but we were like, let’s try it out and if it fails, it’s the curse of the name, I guess. So that’s how we did that.

Yeah, we’ve shortened it. It used to be Lazerdisk Party Sex. Which we were really being jokey with. But we streamlined it. Soon it’ll just be L. Just one straight line.

You’ve done a lot of remixes – with Lido, Anamanaguchi – you’ve also collaborated with Diplo. How was it like working with Diplo?

It was good. It was a while ago. It was pretty much all online, we met him in Miami and we wwere living there at the time, and he was like “Yo, you guys live here? You wanna make a song?” so we were like, “Sure.”

So you just met him in Miami?

Yeah, I think I tweeted at him. “Hey you live in Miami?” and he was like “Oh, you live here? Wanna make a song?” It was really easy.

Yeah, totally casual. Casual dude. So that was that and yeah, that was a cool, little experience. Very grateful to have done that.

Did you actually go over to Diplo’s place to make the track?

Mmm, we met him at this hotel, and he was very busy. (motions using his phone) “Yeah, so like you want to make a song, are you into that? Do you have Dropbox?” and we were like “no” so he said “get Dropbox” and we did it all there. So he was doing lots of stuff but he’s a superstar now. He was really big then, but he’s crazy big now.

How did you feel about that when it happened?

I was really excited. I look up to him a lot starting because he’s a good tastemaker. He would find good little pockets and bring them to people, I admired that a lot. It was cool to have somebody that I looked up to scarily casually reach out and say “hey, you wanna do something?” He was the first person we ever collaborated with.

That’s crazy for Diplo to be the first person you collaborated with.

Yeah, he’s a cool guy. He likes doing that, for sure. If you were to collaborate with someone, living or dead, who would it be?

Oh man. That’s so hard. It’s hard because there’s so many people I want to meet and be like wow, you’re cool! *thinking* Wednesday Campanella.

How did you find out about her?

My friend Garrett, who actually works for ASOBISYSTEM, and lives in LA, gave me the tip like “Yo, check her out.” And I was like “Oh my gosh, this is so good.”

Oh man. The whole group, the visual aesthetic, the beats…I found out that the guy that produces for her is on Nujabes, his label (*ref: Hydeout Productions), so I was like you gotta be kidding me. Everything just started getting better. But COM_I seems super fun. She seems genuinely cool and creative. I love how it sounds and everything. She’s so awesome.

Oh yeah, for sure. Well I got into music from DDR (Dance Dance Revolution). (laughs) Do you know that?

Yeah! Was that the triggering factor that opened you up to Japanese music?

I like rap music and stuff, but when I started making music, I was inspired by all the DDR guys. They were producing music based off of guys – like Yasutaka Nakata – for the games. So it kind of opened my eyes to Japanese music even in this weird, different way. You don’t really listen to DDR songs on the radio, you know what I mean? But that was the window and since then, Nujabes was the one that I really, really liked. And then a lot of composers too, like Joe Hisaishi. I like Yoko Kanno. And I’m also super into Kiari’s stuff. A lot of CAPSULE stuff too. I’m into it.

So would collaborating with a Japanese artist be something you want to do?

Do you also listen to other foreign artists, aside from Japan?

Yeah, a lot of producers that I like…I’m trying not to think too much about vocalists, but lots of producers out of France, Point Point are incredible, and then Lido and Cashmere Cat from Norway. Hudson Mohawke. Rustie. They’re all over the place. I feel like it’s so hard to even remember who’s foreign because of the internet. I know a lot of Japanese producers too. Masayoshi Iimori, I’m a big fan. And then the TREKKIE TRAX guys, Maltine Records…they’re so good. The stuff coming out of here is really, really exciting.

What do you think made you gravitate towards electronic music vs. other genres like R&B, rock, etc.?

I think it was because I couldn’t play any instruments and I figured out the computer first. Also, I think electronic music is so broad that it’s not even a genre, really. There’s weird, ambient stuff and house music, and then there’s Aphex Twin. It’s all over the place. That was nice. Maybe I’m just not up on rock music, but I feel there’s more guidelines for that, but for electronic music it’s all over the place, and I like that.

If you were to name your music a genre, what would you call it?

We’ll come back to that then!

This is your first time in Tokyo but how is it so far? You landed at 2am, have you visited anywhere?

How was your visit to Family Mart?

What amazed you the most, it’s definitely different from the convenience stores in the states.

Sara: We actually went to a 7-11 last night and got all the food.

What did you get?

Chad: A bunch of rice things.

Chad: We were told to get the chicken at Family Mart.

The chicken at Family Mart is really good.

Yeah, that’s what I heard, that it’s on point because I didn’t want to get chicken all over me.

You should get the Premium chicken. Don’t settle with the regular.

Ok. Only the best, I will do that.

Do you have a list of things you want to do while you’re here?

Oh yeah. There’s a lot of music stuff I’m trying to do, I’m trying to meet up with some people. I’m kind of embarassed of the stuff I want to do because it’s really touristy.

That’s the best stuff though. (laughs)

Oh yeah, in Odaiba, the huge one!

That would be so cool *shyly* We might go to the owl cafe.

They actually have one in Harajuku.

Chad: Really? I guess that’s what we’re going to do.

I just realized it was here this morning, it’s really close by – a 10 min walk from here.

Chad: That’s the only she wanted to do.

Yeah. I also have a couple of friends here that I want to meet and play Sound Voltex. It’s an arcade music game. It’s tight.

Do you have arcades in the states?

Well in LA, there’s one arcade that’s really good and they get imported games from this place called Round 1.

Do they that out here? Oh yeah, so they have it in LA so they’ll say “newest game in Japan”! They’re hooked up to servers out here, it’s really cool.

Is it close from your place?

Oh yeah, it’s like a half hour drive, so I can’t walk there, but it’s what’s up. So I had some friends that were in LA when Anamanaguchi played with Hatsune Miku. So I met my friend at the show, but he lives here and I want to play with him. He’s so good at Sound Voltex. That’s something I want to do.

Yeah, that’s where I’ll be.

We have a whole bunch of music. We’re coming up with a really cool way to release it.

Do we get to know how?

I don’t want to say anything really just because…

Don’t want to give away too much?

Just because we’re still developing the platform of how it comes out. Something that we’re interested in is taking a digital release and actually using that as a way to enhance the music experience, do something a little different rather than just using it as a means to an end, like putting it up on Soundcloud. So we’re developing something. We’re working with some people to make it a little more interactive. So we’ll see. It’ll be really cool.

It does seem really cool! When will be seeing it in full shape?

Probably in the next six-nine months. I don’t know though.

Hopefully within a year?

Chad: Yeah. So I pitched my idea and said “I want to do this!” and they’re like “Ok” it doesn’t make sense to me how they develop it because I don’t know coding or anything, so it just seems like magic.

Chad: Yeah, but if we do what we want to do, it’s going to be pretty cool. We’re also working with Anamanaguchi on some stuff here and there, and Rhytmeklubben. They’re out of Norway, they’re super good too. It’s not English. Here, I’ll write it down. They’re great! Something crazy happened in the waters of Norway. They’re killing it right now. So we’re working with people like that and we’re trying to produce for more artists too. It doesn’t have to be all about us, we’re trying to find artists that we like and building them, and doing stuff like that.

Please give a shout out to the people who are coming out to the show this Saturday!

Did you come up with a genre name? That could make the final wrap.

The genre name can be ZONE-TONES.

What does that entail?

Zoney music and a lot of tones.